Story and photos by Mark Shelton

Bookended by the first two snowstorms of the 2014 winter, the Sixth Annual Bills’ BadAss 50K (BBA50K) once again defied the odds. You could see the frustration on the faces of race directors and local ultra runners Wild Bill Wagner and Chef Bill Bailey.  All around Northeast Ohio there were reports of snow from a few inches to 10 inches deep on Friday.  On Saturday, the day of the race, the sun came out, it almost warmed up to 40 degrees and there was no snow on the ground!

The lake effect snow storm had passed just north of the Everett Covered Bridge in the Cuyahoga Valley National Park (CVNP), leaving the area around the bridge, which was the starting line/aid station, and two adjacent trail systems dry and clean.  For these two self-proclaimed lazy race directors good weather is not what they hope for in mid –November.  The nastier the weather, the more fun.  The muddier the trails, even more fun.  Cold nasty weather and wet muddy trails, the most fun.  None of it in 2014!

By Sunday, the snow came blowing back and did not spare the Everett Covered Bridge and the trails.  But by this time the BBA50K runners were safe at home, resting and as Jennifer Smith Pierce stated, “I’m warm again and I’ve eaten my body weight in calories.”

Chef Bill Bailey and Wild Bill Wagner have created a laid-back laziness culture around this race.  The laid-back laziness appears in the volunteers and runners. Two of the CVNP Rangers, who were on-site for a few hours, even asked what this event was.  “It is a race, a fun run, or what?”  There was no satisfactory answer. Tim Simenc, one of the runners said it best, “BBA50K is by far the most fun race to participate in (running or volunteering). It is the only race where the Race Director has to yell at everyone to start the race because the racers are too busy talking with each other. Priceless experience every time! Thanks for a great time.”

The ubiquitous bullhorn with Chef Bill’s lips attached was absent after the start because Chef Bill decided to run the race, and Wild Bill hopped into his car and turned on the heater.   Various derogatory and outright rude words were used to describe Wild Bill’s behavior, none of which bothered him and none of which can be printed here.

This is not an easy 50K. The Bills selected two of the most challenging trail systems in the park. The runners do six five-mile loops on the trails before running up an insanely spiteful steep incline to secure a candy bubble gum cigarette pack.  The runners run back down the hill to the finish line.  Each runner then presents the candy bubble gum cigarette pack to secure the coveted BILLS’ BADASS finishers Tech Shirt, dog tag, the new BILLS’ BADASS coffee mug and a BBA50K sticker.

The overall philosophy of the race directors is to keep the race free for the participants. Generous support comes from various organizations, businesses and individuals for which both the Bills’ and those running this race are very thankful. Special thanks go to Cleveland West Road Runners Club and Forget the PR, a local 50K trail race, for their donations. All of these donations help keep the costs to a minimum while providing a great experience and fun for the runners.

The overall finishers were Jim Van Orman in 4:56:50 and Michelle Martin in 5:29:51. Michelle was fifth overall and the first woman.

Joseph Kiggins perhaps said it best, “Special thanks to Chef Bill Bailey and Wild Bill Wagner for putting on such a great event year after year. They are awesome examples of what makes this community so special. Also thanks to all the volunteers that came out and gave their time.” 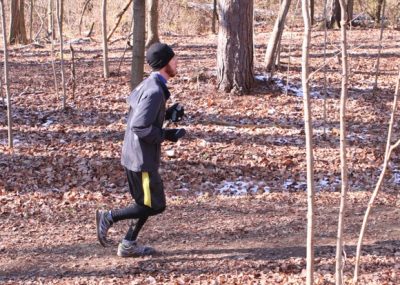 Nathan Warner running strong on his way to his thirteenth overall finish. 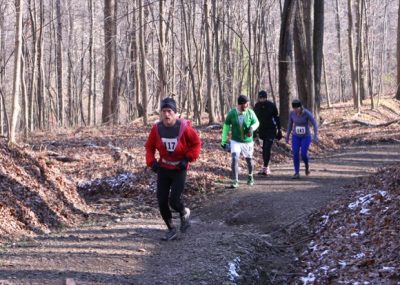 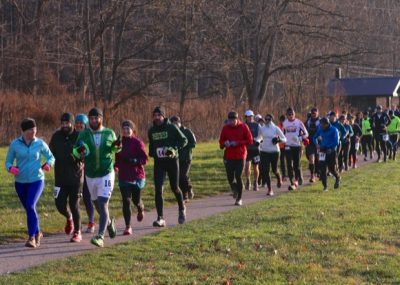 Runners approach Everett Covered Bridge in the Cuyahoga Valley National Park near the start of the Bills’ BadAss 50K.