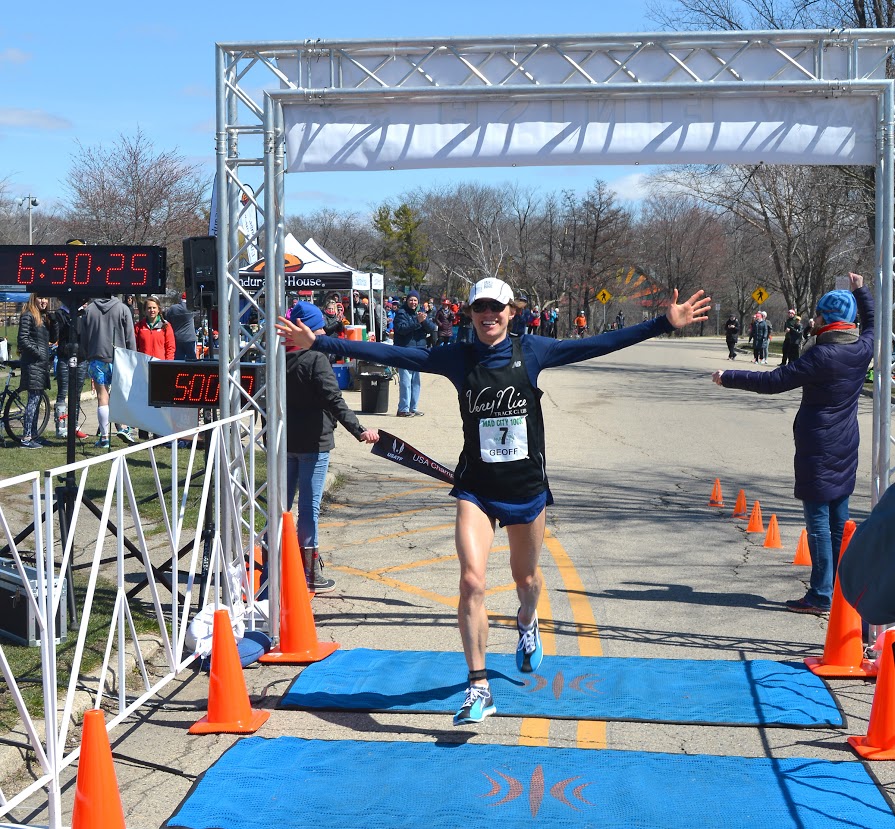 Geoff Burns breaks the tape at the US 100K Championships. Photo: Karl Leas

Geoff Burns is only a year into running ultramarathons, but it seems like a sport he was born for. The newly minted 100K US Champion hails from Traverse City, MI and grew up running and racing. His dad introduced him to the sport early, and he’s competed for much of his life—from elementary school track leagues through several seasons at the University of Michigan, where he walked onto the team. During grad school he took a break from training, but now working as a Biomechanics Research Engineer for the University of Michigan’s Department of Orthopedic Surgery, he has upped his training and is fully realizing his potential. He excitedly explains, “Following a hunch that I had the engine for the longer stuff, I found my ways into ultras!”

Quick & Dirty: Congrats on your win and speedy finish at the US 100K Road Championships at Mad City 100K! Your time of 6:30:37 was not only a course record by 13 minutes, but also the third fastest ever by an American (the AR is 6:27:43, held by Max King). However, your pace was quite quicker than that for a while. You ran the first half of the race in 3:04:21, which is under Don Ritchie’s world record pace (from his 6:10:20, run in 1978). Take me through the race—was the plan always to go so fast? When did you start to fall off the pace and how did you fight through that?

When I went through halfway, I couldn’t ignore the math, realized I was on world record pace

Geoff Burns: Thanks! It was certainly a thrill. I definitely did not plan on starting out that fast, and was actually hoping to maybe try and work down to that by the last lap. I had a quiet suspicion going into the race that I could do something special, but I was not anticipating that. However, within the first mile, I just felt indescribably (and uncharacteristically) good. Normally it takes me a long time to warm up, but over the first two miles, I just floated away from the main pack of guys.

I had originally wanted to run the course record pace for awhile, then try and work down from there over the last few laps. I don’t like to look at splits or my watch, so when I went through the first lap that fast, I was pretty surprised. I felt like I made an adjustment to back off, as I figured I should just calm down, relax, and maybe it would be a really good day. Then I hit the next lap two minutes faster. At that point, I just didn’t dwell on it and decided to hit the pace that felt right.

When I went through halfway, I couldn’t ignore the math, realized I was on world record pace, and actually started laughing out loud. I was pretty shocked, not because of what was to come, but actually how good I felt at that clip. Over the next two laps, I kept rolling, but having finally seen where I could wind up, I think I actually started to talk myself out of it. It wasn’t until the 8th lap that I really felt everything start to break down. I had seen that I was on pace through 70k to run really fast through 50 miles, but halfway through the 8th lap I had to stop for a colonic-emptying session (the second one of the race, haha), and after that, I just kinda lost forward drive and switched into more of a defensive mode.

Going through 80k, I honestly was not sure if I was going to run under 6:20 or over 7:20, or even finish. The effects of the endless rolling hills and cold temperatures (I’m a weather wuss, despite my Michigan roots) were exponentially rocking my legs. My subconscious demons definitely came out in full force and the chorus to stop was real. The ninth lap was definitely the roughest, but I just kept telling myself that if I moved my legs faster than walking, I’d still wind up with a decent time and probably win, so the grind was on. The last lap was kind of like a hangover, and I came to enough to bring it home not too un-strong.

Q&D: I talked to your training partner, Zach Ornelas, who said you put in up to 130 miles a week in preparation for the race. Is that typical? What else did you focus on in your training to ready yourself for a fast pace and the rigors of 100k on the road?

GB: Training, I peaked at 130 mpw, but that certainly wasn’t maintained. I’d say the volume was very pyramidal, in that I steadily built up to that, then backed down. My training schedule was very similar to what I’d do for a marathon, with some longer single runs during the week. I’m pretty studious in my training design, but I’d say the training schedule was a [Arthur] Lydiard canvas painted with a [Renato] Canova brush and a [Ron] Warhurst color palette, haha. I didn’t do any huge runs or back-to-back long runs leading into the race, but I did do a few specific sessions to prepare for mechanical fatigue of running the hills late in the race: I’d do my long run in the morning, then go run a shakeout in the evening on this mile-long hill behind my apartment, just going up and down it a few times. I knew from racing the 50k the previous year that those rollers definitely break the legs down, so I wanted to try and at least brace myself a bit for that.

Q&D: You ran your first ultra just over a year ago at the Mad City 50K, winning in a CR 3:00:57. That performance got you on Team USA for the 50K World Championships in Doha, Qatar last November. Team USA earned Silver, and you contributed as 10th place overall (and 3rd American) in 3:06:38. How was your racing experience in Doha? What lessons did you learn from your two 50k races last year?

GB: The Doha experience was incredible; the sheer adrenaline of competing for the United States was unlike anything I had experienced in athletics. Moreover, the course was probably the toughest flat course you could design, and from that I definitely gained at least a little perspective of suffering on borderline bonk-state with double-digit miles still to run. From that, as well as the Mad City 50K earlier in the year, I learned so much, both about my strengths as a runner, as well as how to race an ultra.

For example, I didn’t drink any water or anything in the Mad City 50K (having not even run a marathon at that point, I unintelligently rationalized that slowing down to take a sip of water would just waste time). So, I can be a little spacey, but I’m a quick learner, and those two ultras, coupled with some marathons, really helped me understand how to manage my race, both mentally and nutritionally.

Q&D: Now that you’ve discovered a real talent for ultramarathons, what are your racing ambitions? Do you still want to focus on marathon and shorter distances? Any interest in trail ultramarathons?

GB: My racing ambitions are to rock some road ultra marathons! Ever since I started studying the ultrarunning world, I’ve romanticized about chasing records and running Comrades. Going into the [Mad City] race, one of my goals was a sub-5 hour 50 miler, but I re-evaluated that mid-race, as I think I could have pushed a little harder through 80k and knocked that out (at the expense of finishing the 100k conscious, haha).

I’ll definitely still continue to race marathons and shorter races, and I love the thrill of racing on the track, and I’m quite confident my marathon best has many minutes that can be taken off. As far as trails go, I will say that I really, really do not enjoy racing on trails. I love following the trail-racing scene, and I love what all those guys are doing, but I am not cut out for it. I’m pretty easily distracted, and I just can’t get into a race when I’m on a trail, as my attention gets diverted by the footing and scenery and whatnot. It’s the same reason I never really enjoyed cross-country in high school or college. In fact, road ultramarathoning gives me the feeling and joy of what I always romanticized cross-country as providing: a long tough, physical and mental blood sport. Trail racing reminds me of what cross-country actually was to me—constantly getting distracted and feeling like I wanted to fly faster but couldn’t. Again, I’m not knocking trail running—I love spectating and following it—it just does not play to my strengths.