Like the Bob Dylan song, there is a “change is coming on” in sports physiology and it is the ultrarunning community showing the way. A small but growing group of ultrarunners have been actively pursuing the fat-adapted approach with success, including some of the elite athletes, most notably Zach Bitter, Jon Olsen and Nikki Kimball.

Fat-adaptation involves sharp carbohydrate restriction in conjunction with a complementing increase in fat consumption (with many of those fats being saturated fats) to induce the physiological shift necessary for the body to “switch” to burning “fat as fuel” at much higher rates. In conjunction with the dietary shift specific training, both in low and high intensity is programmed into the training blocks to push the fat burning envelope into higher intensity levels. Observationally, athletes following this approach have been able to complete ultramarathon distances on a fraction of the caloric intake normally necessary, many athletes report completing 100 Mile runs on 1300-2000 calories. Unfortunately, there is scant science to support the plausibility of such a dramatic drop in consumption. That is, until now.

Last year Dr. Jeff Volek RD/PhD, his graduate students and colleagues commenced data collection for the FASTER Study (FASTER=Fat-Adapted-Substrate oxidation in-Trained-Elite-Runners) to look at the physiological differences between elite male ultra-marathon runners with one cohort following a conventional high carbohydrate diet and the other following a low carb/fat-adapted strategy. While the publications won’t be emerging into the Journals until later in 2015 some of the basic metabolic data has been presented by Dr. Volek at various nutrition and sports physiology conferences which I can share. As you can see from the chart, these two cohorts, High Carb Conventional Diet & Low Carb Fat-Adapted Diet, were very well matched. 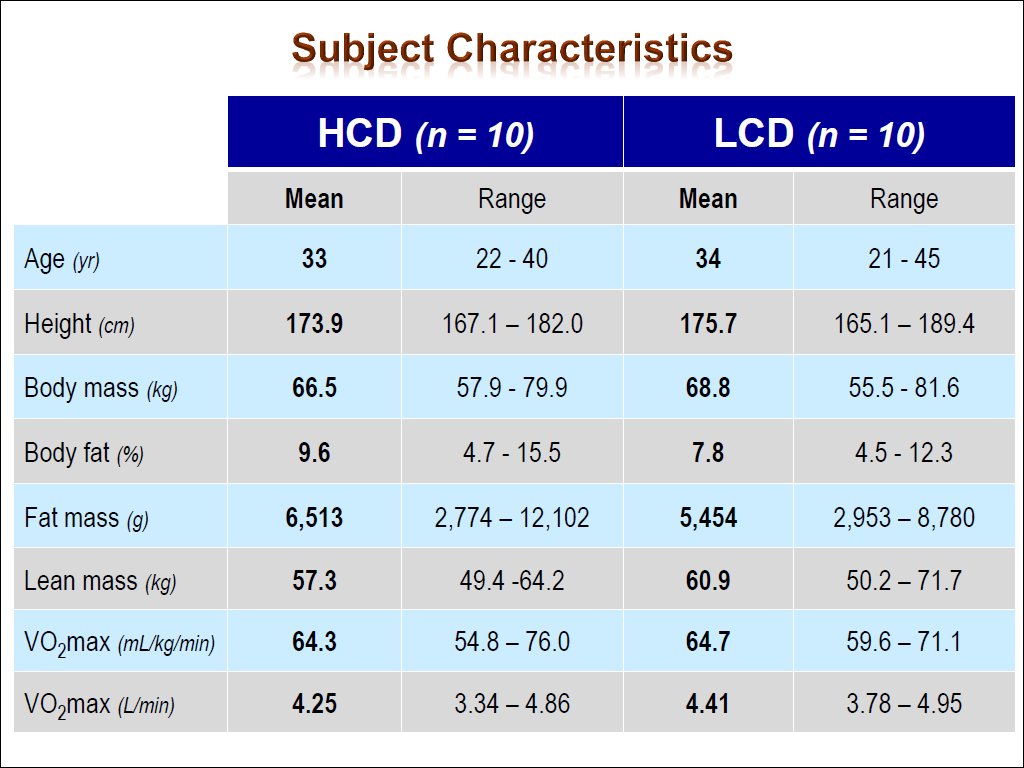 The chart below represents the macronutrient profile of the two cohorts. As you can see from the pie charts the conventional diet follows what most athletes are advised to consume  while the Low-Carb cohort has a very high fat intake. Keep in mind this is as a percentage of calories and because fats are over twice as calorically dense and very satiating when fat is consumed in a carbohydrate restricted diet an athlete simply does not eat much and tends not to overeat so the idea many people imagine of a high fat diet does not fit the reality of how it is practiced daily. Also note many of these athletes do cycle in concentrated forms of carbohydrates and supplements for races and high intensity blocks of training, however, to control variables for the study, their diet was restricted to a Low-Carb protocol. 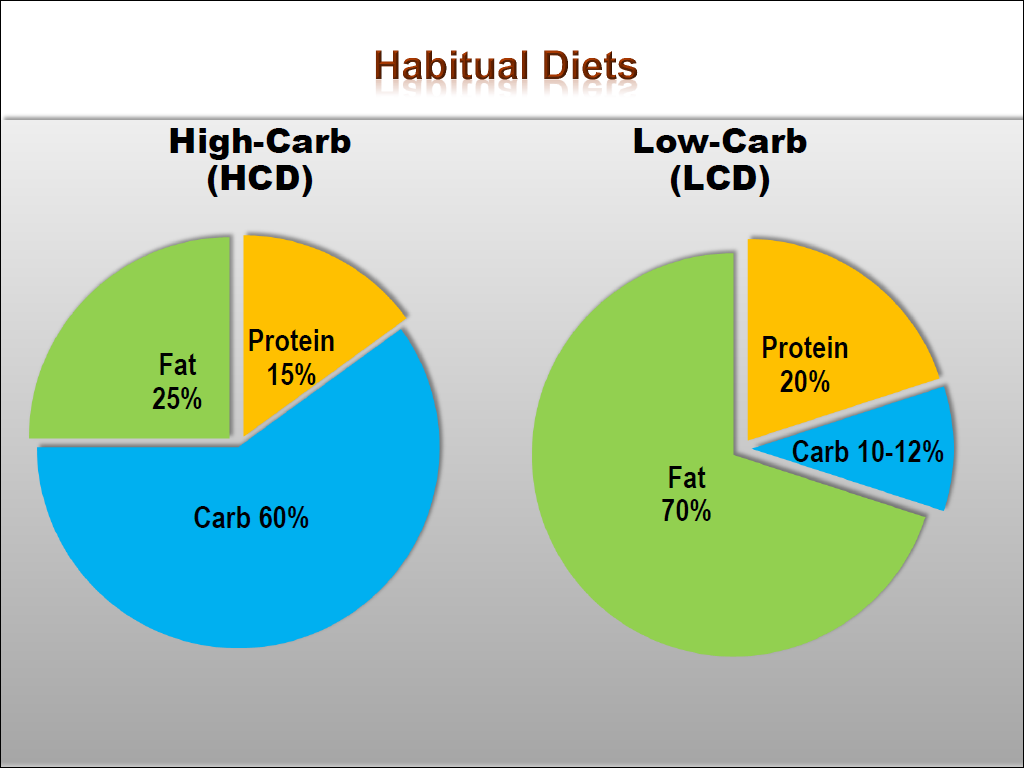 FASTER is a very robust study and includes muscle biopsies, a very thorough blood panel, urine and cheek cell analysis etc. At the time of this writing Dr. Volek and his team are analyzing data and writing up their papers. As you read this some of these papers are probably going through the peer-review process prior to submission for publication. This being said, a few basic and key markers have emerged from the data. Here are a few highlights:

Fat utilization: The current science says the absolute maximum amount of fat an athlete can burn is upwards of 1.0 grams/minute with most highly trained athletes falling into the 0-45-0.75 grams/minute range (Venables et.al.; “Determinants of fat oxidation during exercise in healthy men and women: a cross-sectional study”), .41 grams/minute in moderate performance athletes and .27 grams/minute in low performance athletes (Lima-Silva et. al.; “Relationship between training status and maximal fat oxidation rate”). The chart below depicts the data taken from the Venables study. 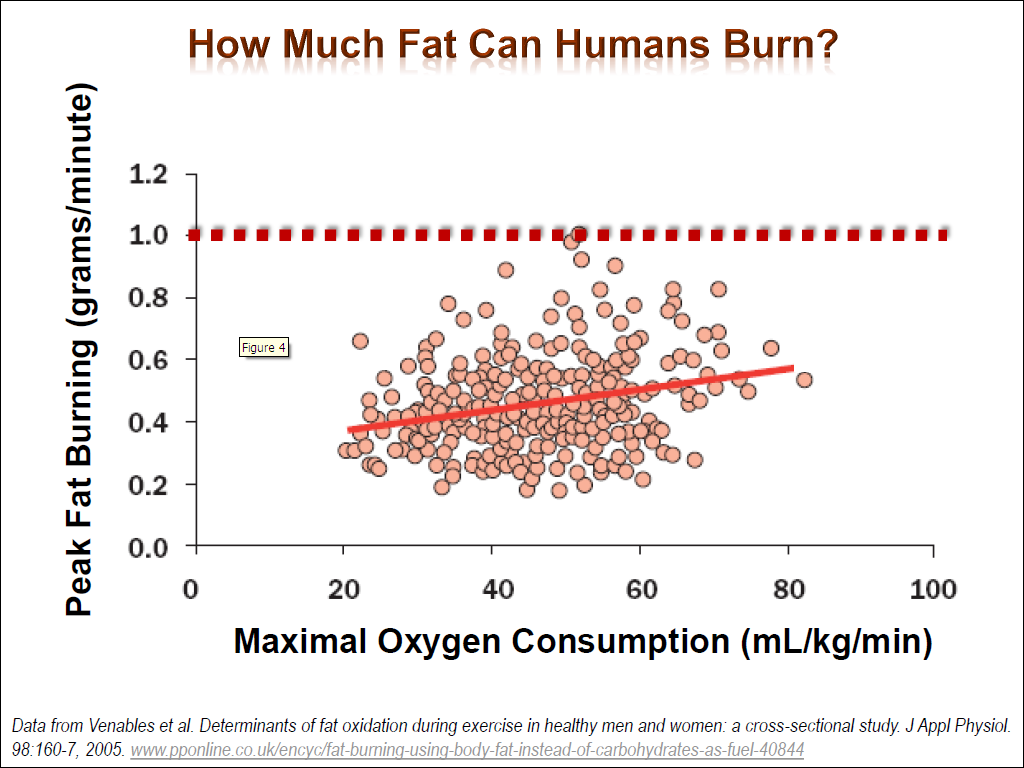 Above Chart from Venables et.al.; “Determinants of fat oxidation during exercise in healthy men and women: a cross-sectional study”

FASTER: The chart below from FASTER shows the data points of the two cohorts. As you can see the high carb cohort fat oxidation rate data is consistent with the Venables data, thus is consistent with the existing body of science. Examining the data points between the two charts it is evident the high carb cohort of FASTER were actually on the upper level of conventional fat oxidation capability. On the other hand the low-carb/fat-adapted cohort was on a completely different level. The mean fatty acid oxidation rate was OVER twice the rate of the high carbohydrate cohort and the lowest rate of fat oxidation in a subject being 1.1 grams/minute which is higher than what the current published literature suggests is possible with one subject actually recording a rate of 1.8 grams /minute of fatty acid oxidation! 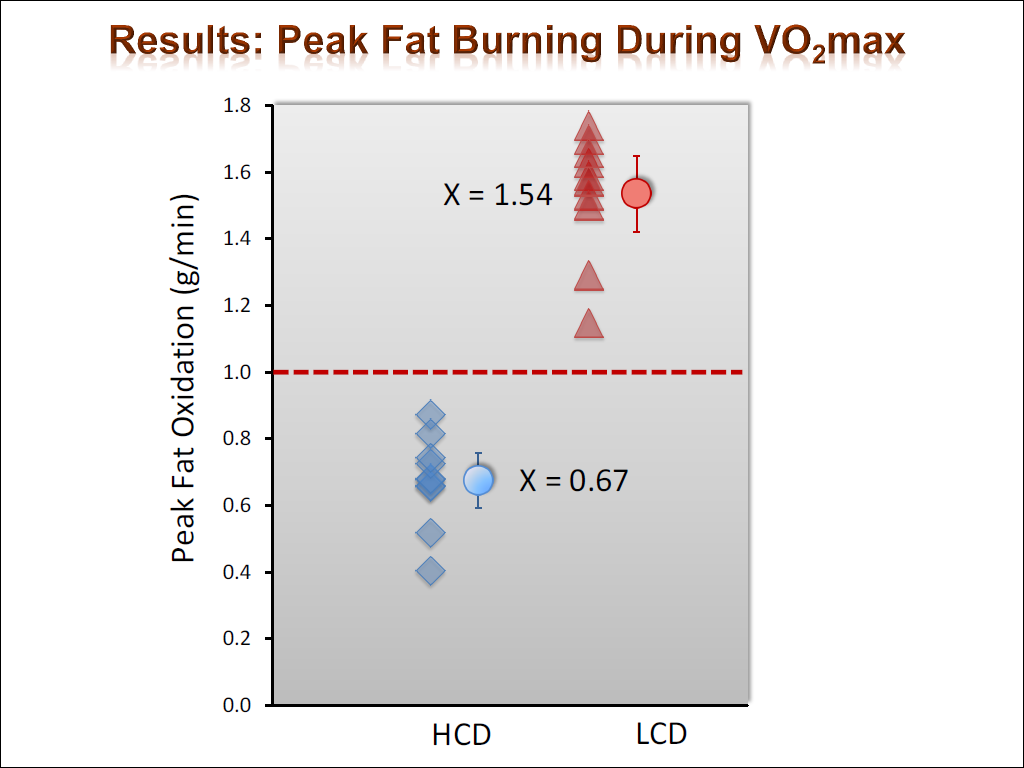 The Crossover Point:  The Crossover Point Hypothesis was developed and studied by George Brooks et.al. at UC Berkeley and it basically measured where an athlete would “Cross-over” from burning primarily fat to primarily carbohydrates for exercise. This investigation established that athletes, depending upon level of aerobic training, “crossover” between 35-65% of their VO2Max.

In real world terms it defined that fat was only relegated to low and mid-level intensity of exercise and did not play a role at higher aerobic intensities as seen here:

FASTER not only challenges the level but coupled with the increased rate of oxidation yields a completely new paradigm for re-thinking how an athlete should approach their aerobic training for energy substrate utilization: 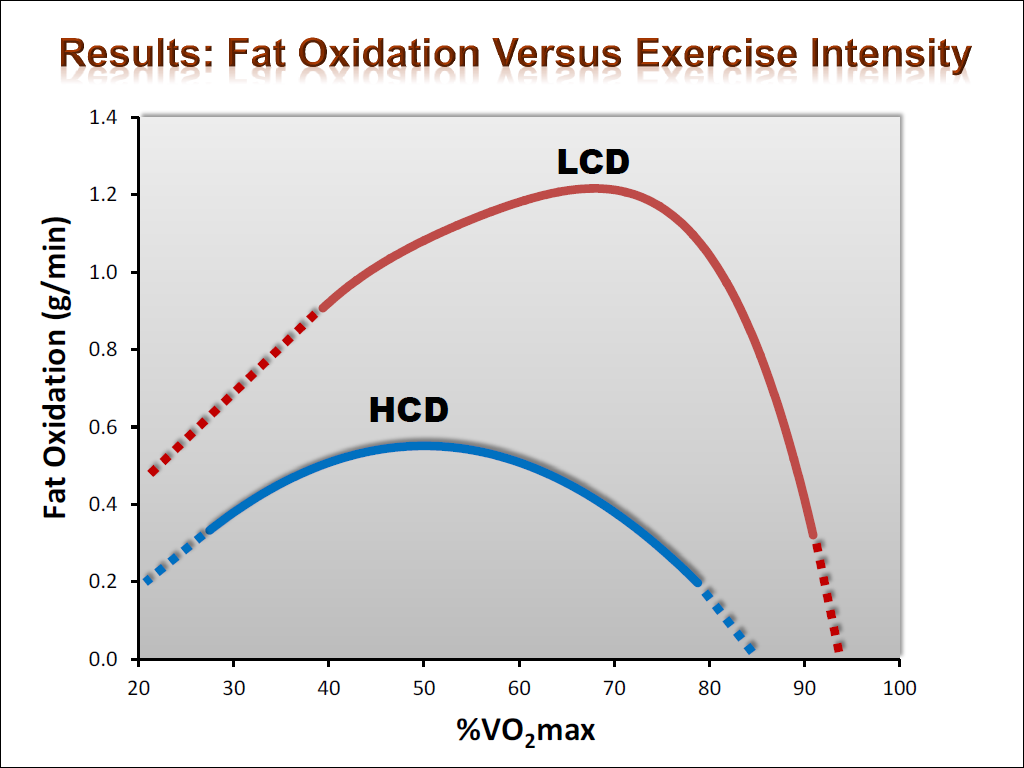 As you can see from the graph, the high-carb cohort data falls consistently in line with the current published literature, but, with the low-carb cohort, not only does the fat utilization shift into the realm of higher aerobic intensity (the realm which is regarded as the “sweet spot” for endurance athlete performance) it does so at a much higher rate of fat utilization.

The final chart depicts the mean fuel partitioning of the subjects over a 3 hour submaximal treadmill run at 65% of VO2Max. While both cohorts were burning more fat than carbohydrates by the end of the 3 hours, the low-carb subjects are burning approximately 30% more fat and, consequently 30% less carbohydrate than the high-carb subject. 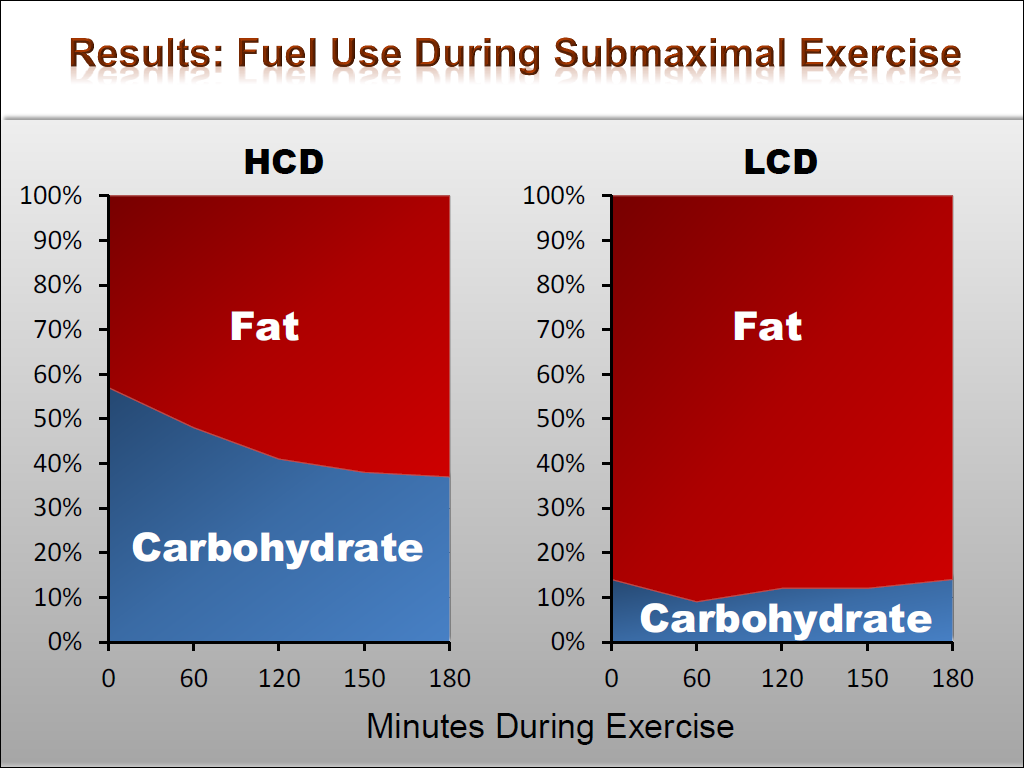 These charts and graphs provide a strong visual of the significance such a shift can have for the ultra-endurance athlete, particularly for the athlete who is experiencing fueling/energy and/or gastrointestinal issues while other athletes do quite well on a conventional high carb diet for athletes. Remember, in the real world, every athlete is different and you are your own N=1.

For the athlete who is already experiencing the benefits of a “fat-adaptation” this article can serve to show your skeptical friends and family it is not anecdotal, that you really are not lying about how little you need to consume during training/competition and there is real science behind the approach.

While there is a lot more esoteric scientific data that will emerge from FASTER, these easy to understand examples pretty well demonstrate a seismic shift is coming and a complete rethinking of how to perform will emerge.

Finally, a special thanks to the subjects who allowed themselves to be poked, prodded, biopsied, and, probably worst of all, subject to a 3 hour treadmill staring at a concrete wall in the name of furthering science. The feedback I have received from Dr. Volek and his staff are all the subjects were great to work with which reflects on our community.