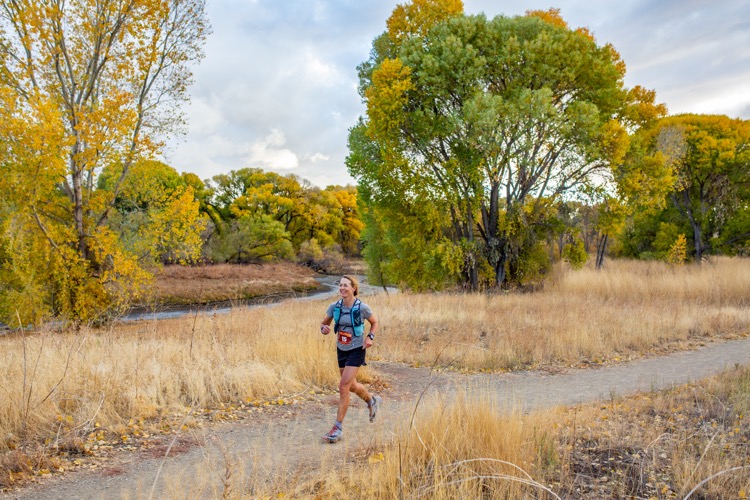 Weathering the Storm at Whiskey Basin

The wind at Whiskey Basin Trail Runs in Prescott, Arizona, was so strong, I feared a trash can would fly over and hit me as I stood at the start line. The wild weather added to a palpable feeling of high energy, and though I couldn’t see others’ expressions due to masks and being distanced for COVID-19 precautions, everyone seemed to be in a good mood judging by the elbow-bumps. While it was a dark and stormy morning, we all needed to run.

The Whiskey Basin Trail Runs—combining a 91K (approximately 57 miles), 60K, 30K, half marathon and 10K distances—normally takes place in mid-April and was rescheduled for early November due to last spring’s shutdown. To promote social distancing, runners started in small waves, and Aravaipa spread the races across the weekend rather than holding all events on Saturday. (Aravaipa plans to hold the sixth edition of the Whiskey Basin runs on April 17, 2021.) 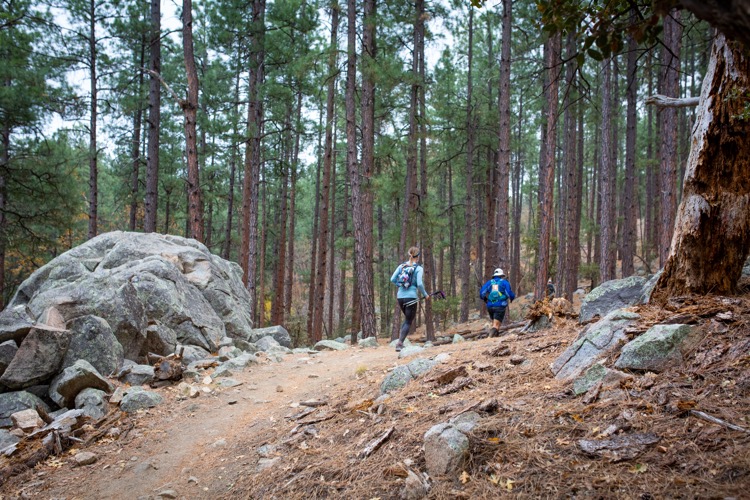 The event takes its name from downtown Prescott’s historic Whiskey Row and its wild west past. The unusual distance of the 91K—or as I like to think of it, a 50K plus a marathon—results from the route following the entire Prescott Circle Trail, which makes a giant loop around the city of Prescott. It also circumnavigates the town’s landmark hill, Thumb Butte (aptly named for its shape), and can be viewed from different vantage points throughout the course.

The gently rolling and mostly runnable route (the profile features only two significant climbs), meanders from a high desert lakeside landscape at an elevation just over 5,000 feet, to pinyon-juniper woodlands in the Prescott National Forest reaching a height of about 6,600 feet.

I had run it once before, in 2019, and yearned to return for the route and the camaraderie. The change in season, from spring to late fall, seemed to reflect the change in the state of the world. Whereas last year’s race felt wholly pleasant and mild, the climate and circumstances this time felt ominous. By mid-day, temperatures dropped to freezing, and a dramatic, dark gray sky unleashed flurries of graupel (snow pellets) while autumn leaves and branches swirled through the forest. 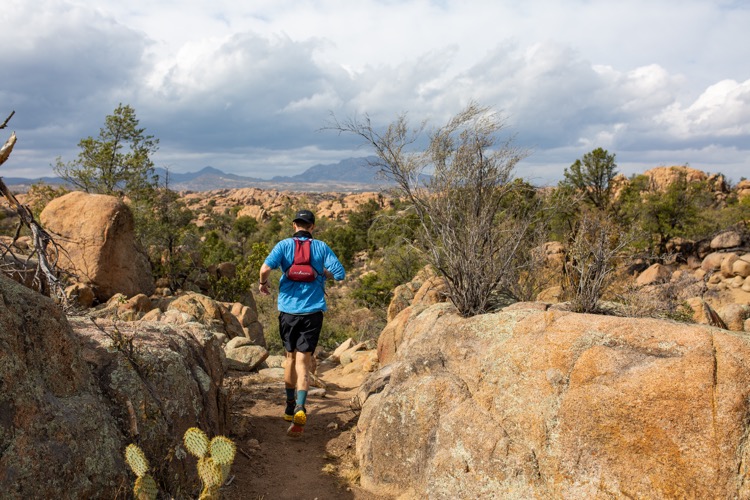 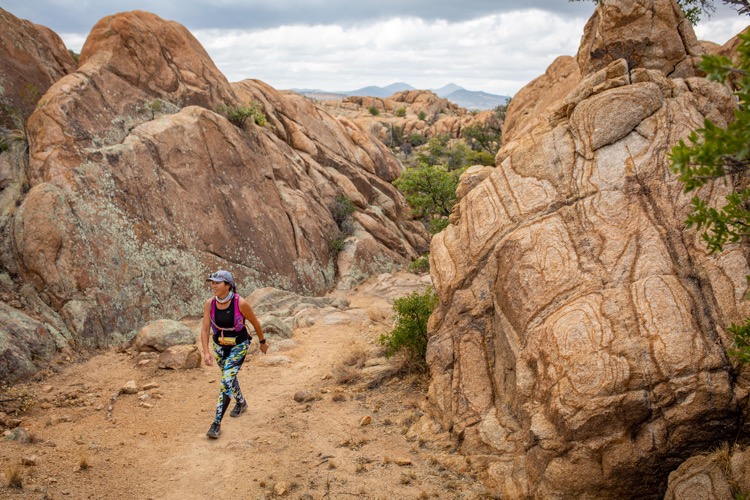 Throughout it all, the masked volunteers at aid stations were cheerfully steadfast and supportive. Halfway through, when I realized I had developed a painful hot spot under my pack, one volunteer generously extended his gloved hand to rub anti-chafe lube on an unreachable spot on my back. (Other than that, all aid station interactions avoided contact.) The simple act of a human touch in today’s world, along with the kindness of strangers, actually brought tears to my eyes, and I couldn’t help saying out loud, “I’ve missed aid stations!”

I wasn’t the only one experiencing heightened emotions. Afterward, I asked men’s winner, Catlow Shipek, how he felt about the event, which was his first real race since the start of the pandemic.

“I had a lot of mixed emotions,” he said. “I wasn’t excited to race with all the COVID-19-related awkwardness. But, I do love Prescott and the loop trail. Plus, I hadn’t caught up with most of my running friends in ages. The brewing winter storm on race day made it exciting. I found myself pausing to catch the view, feel the wind, and smell fall throughout the race without a care for time…I’m glad I had the race to distract me for a bit. It was much more productive to run than refresh the news feed!”

Shipek won in 8:44, and women’s winner, Lauren Coury, finished in 9:02 and was fourth overall. 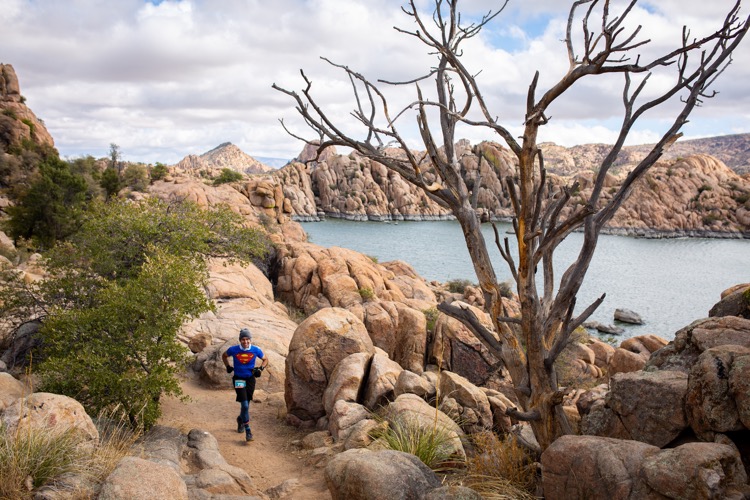 Completing the loop and arriving back at the start/finish area gave runners the reward of returning to the route’s most scenic area—big rock formations called the Granite Dells that rise around the surface of glimmering Watson Lake. The 60K and 30K runners lucked out, getting to rock-hop over these formations due to new routes for those distances. Those of us in the 91K ran past the Granite Dells, and in my mind, these tall anthropomorphic rocks stood like an audience that welcomed us to the finish and, like Thumb Butte, seemed to say, “Good job.”