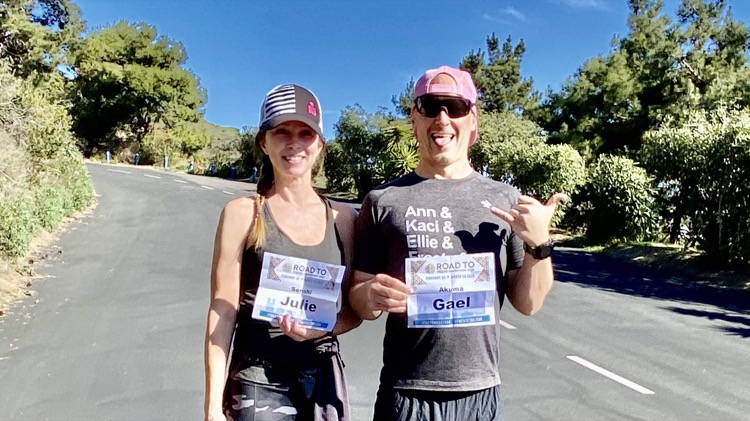 Gaël and Julie with their race numbers for the virtual Tokyo Marathon. Photo courtesy Gaël Couturier.

Since COVID-19 hit, many ultras have been either postponed, canceled or both. That happened not only in America but all over the world. As a result, participants have often been left with nothing: no way to connect, no hope and more often than not, no full reimbursement. The Vibram Hong Kong 100, which is the first race of the Ultra–Trail® World Tour calendar year and by far the most attractive ultra trail race in Asia, is one of the few ultrarunning events that refused to surrender to the ambient negative narrative. Allowing runners to participate in a different version of the event has made a bold statement that will impact our sport forever.

This past January, for the local Chinese authorities, the threat of COVIID-19 was understandably too severe for any local running events to take place. As it was logistically impossible and illegal to hold it, the Vibram Hong Kong 100 was canceled. Instead of gathering in Hong Kong, runners from across the world were offered an alternative: run it anywhere, on their own course. Thanks to the race organizers, Janet Ng and Steve Brammar, runners were offered a virtual event that made good sense.

First, the event changed its name and became the Vibram Hong Kong 100 Flex. And it was flexible, alright. The rules were straightforward: run the course in Hong Kong without any official support from the race organizers, only if you were a local resident. Or, run and match the distance and elevation from wherever you live. That’s the brilliant part. 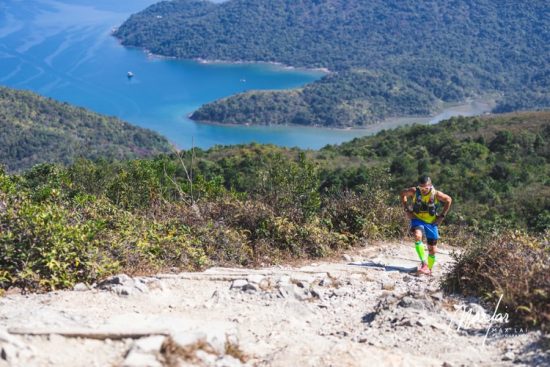 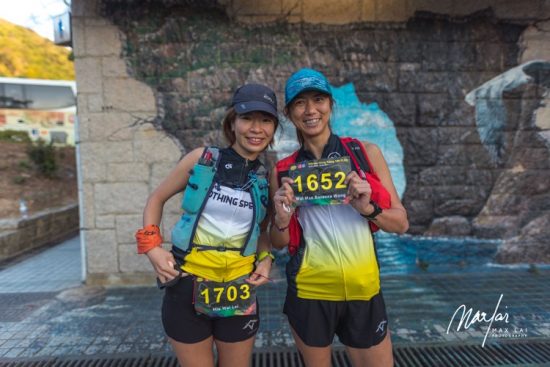 Whether you lived in Hong Kong or not, the time frame of the event was a full month, from January 16–February 15, 2021. Runners could complete the race in one run or divide it into as many shorter segments as needed, with no time limit. It was not a typical race, and it was certainly not about competing. It was about participating and finishing.

“HK100 Flex is a call to everyone to continue to train, run, hike and connect wherever you are in the world,’’ explained Janet Ng and Steve Brammar. “It is not a competition. It is our way of giving you a little nudge to stay fit and strong and continue to pursue your personal trail running goals in these difficult times.”

Ironically, this COVID crisis started to seriously impact all of us around February 2020, only a few days after the finish of last year’s race. Today, after months of disappointment and frustration, we certainly deal better with not being able to run and race like before. It’s terrible, of course, but we’re getting more and more accustomed to it. At this point in our lives, any creative way to keep us connected to an event, to the community and ultimately, to each other, is a relief.

I have French citizenship and I am also, technically, an Italian resident. But for the last year and a half, I’ve been a foreign correspondent in North America, with my current homebase in Southern California. As a journalist, citizen of the world and an ultrarunner, I have been given the opportunity to live and travel all over for work and running. It is not an exaggeration to write that the world is my playground. If COVID-19 is forcing you and I to add a digital or a virtual side to our running, then so be it. It is what it is. What are we going to do about it? Stop running? 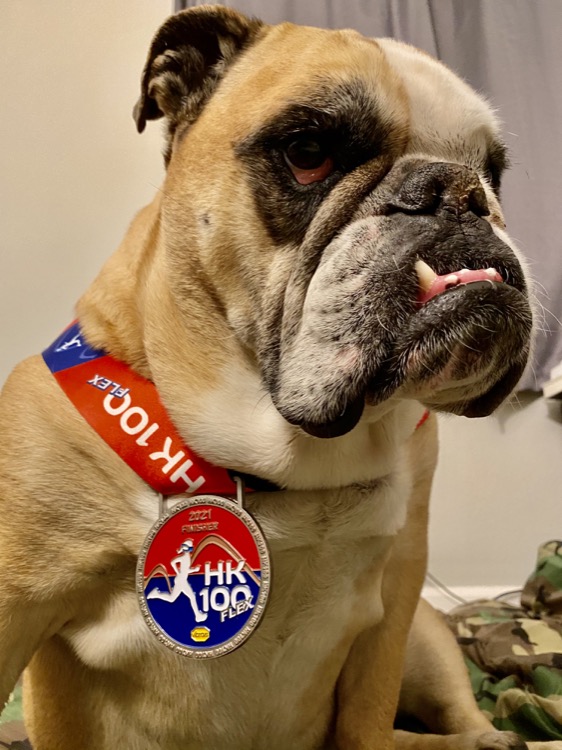 Because I had been in Hong Kong last year to run the HK100 for real, I decided to enter this year’s Vibram Hong Kong 100 Flex and run it virtually from home. I chose a very all-American state park, north of Los Angeles: Malibu Creek State Park. This is where Hollywood shot the M.A.S.H. television series throughout the ’70s. For over a month, I divided my “race” into five segments.

Thanks to the technology of our modern GPS watches, the results submission procedure was flawless, fast and secure. Again, HK100 Flex was not a race and there was nothing to win and no one to beat. The whole concept was about finishing it within the rules. At the end of the month-long window, I was declared a finisher. A few days later, I received an actual medal on which the little runner figure is wearing a mask, a few other physical goodies and a genuine finisher certificate sent to me directly from Hong Kong.

Yes, the future of ultrarunning has been changed forever. This is a big change in the way we participate in running events and get together. Still, it’s not more sad or frustrating than doing Zoom meetings for work everyday or working from home. Those things are now fully integrated into our modern living. We have often welcomed them as a sign of progress. Just like that, the opportunity to run virtually should be considered progress.

I’m not sure what Western States Endurance Run, Hardrock, UTMB or Marathon Des Sables will do this season, but we could expect some iconic races to lead the way and embrace this virtual revolution. Races like the Boston, New York and Tokyo Marathons are great examples. Now is the time to allow us all to participate one way or another. Real racing will be back sooner or later, but virtual racing (the way the Hong Kong 100 Flex has done) is highly satisfactory. It does not take away anything from the quality of those events, it simply adds a layer of possibility, hope and gathering beyond our physical borders and other limitations.