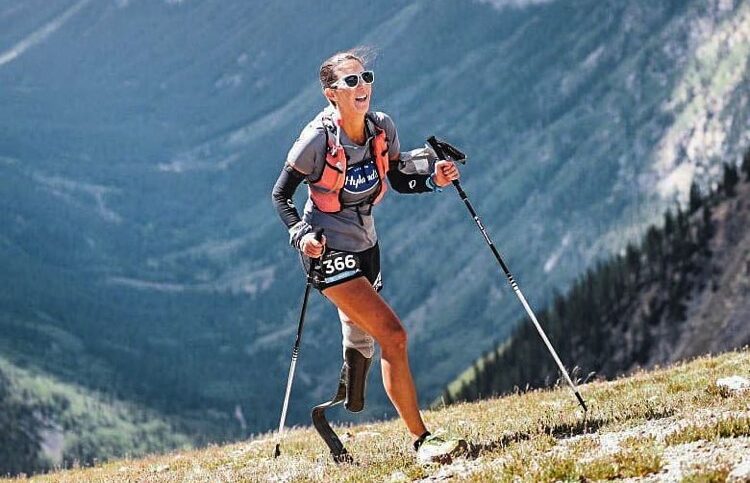 Where do you live currently? Gilbert, Arizona

Where did you grow up? I was born and raised in South Africa but we moved around a lot. My husband and I love seeing the world and experiencing new things. I’ve lived in the Netherlands (7 years), England (13 years) and North Carolina (5 years) and now we live in Arizona. I always joke that my kids are world citizens, because they were born in England, they have Dutch passports, their parents are from South Africa and they live in America. Very confusing.

Family (kids, spouse, pets)? I have two kids, aged 9 and 11, and my husband and I have been married for almost 25 years. We have two dogs (a labrador mix and a golden retriever). The golden retriever is the new addition and is only a few weeks old. We also have a cat. 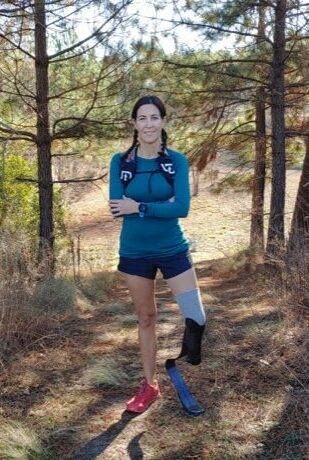 Have you always been a runner? No, I only started running five years ago. I thought it would be a great thing to start as an amputee (haha). I actually hated running as a kid. I do wish that I had started running earlier.

What inspired you to start running ultras? It’s not something amputees really do, so I wanted to see if I could push the limits. My first ultra was a 40-mile trail race and I fell in love with the sport and the community, and I haven’t looked back since.

What is the most difficult thing about running with a prosthetic leg? It’s the unpredictability. There are so many things that can go wrong and that you have to think about. You have to rely on this foreign object attached to your stump. Your brain needs to learn to trust it as you don’t get any feedback from your foot. I’ve had tread fall off my blade during a race and I had to think about how to reattach it. Now I carry super glue and duct tape with me in my hydration vest, just in case. I’ve had my valve break which means my blade didn’t want to stay on. Then there are the blisters, bruising and chafing of the stump. It’s just things that can come up during a run that can be frustrating. I’ve learned over the years to solve issues and work with what I have, but there are always surprises.

How did you decide to run 100 miles on a treadmill? It was during COVID and my 100-mile race was canceled, so I decided to do it on the treadmill. I didn’t want my training to go to waste. 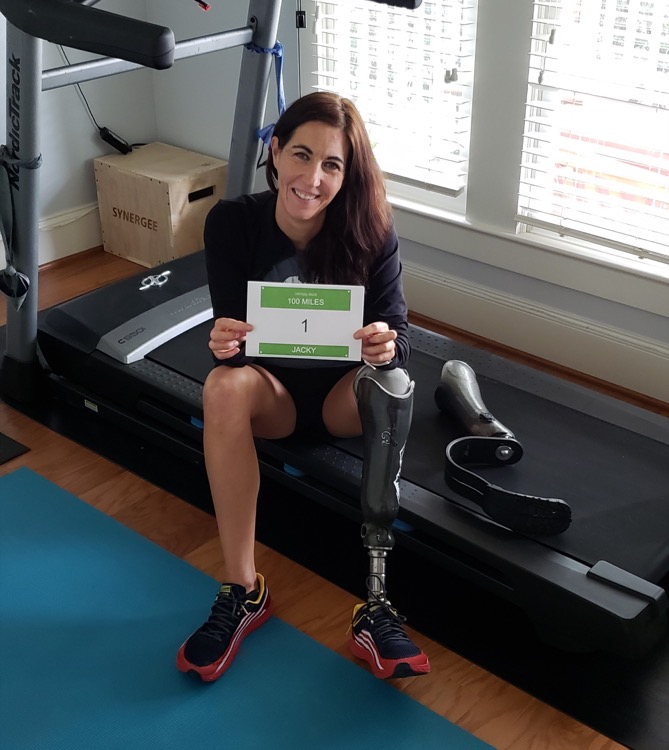 What was more challenging, the mental or physical piece of running for almost 24 hours on a treadmill? It was definitely more mental than anything else and you can only watch so much Netflix. It was the hardest thing I’ve ever done.

There are a lot of other smaller achievements, which means a lot to me personally, like finishing the Umstead 50-miler, one of the most fun races I’ve done, and the Fat Ox 24-hour race. I was finished and ready to quit at 12 hours, but pushed myself through and finished eighth overall (fourth woman).

What has been your most challenging race experience? Definitely the Moab 240. I was so ready for it, but I wasn’t ready for the rain and wet/slippery rocks which slowed me down more than expected. I can’t wait to go back in October to give it another shot.

How do you balance being a mom with the time it takes to train for ultras? It is challenging and I have a lot of “mom guilt” when I am training, but I try and spend as much time with my kids when I am not training to make up for those days that I am out running.

What do you wish people understood more about amputee runners? I wish people would understand that it’s a lot more complicated than just putting on a leg and going for a run. As an amputee, I use 30% more energy to run than an able-bodied runner. It takes months (sometimes years) to get the socket and blade to fit perfectly for what I’m doing. There is a lot of work behind the scenes that goes into running with a prosthetic.

What race or run is at the top of your bucket list? I have a big list, but Western States is at the top. I also want to run Cocodona 250 and Comrades in South Africa, and a personal challenge is to run the Grand Canyon rim-to-rim-to-rim. 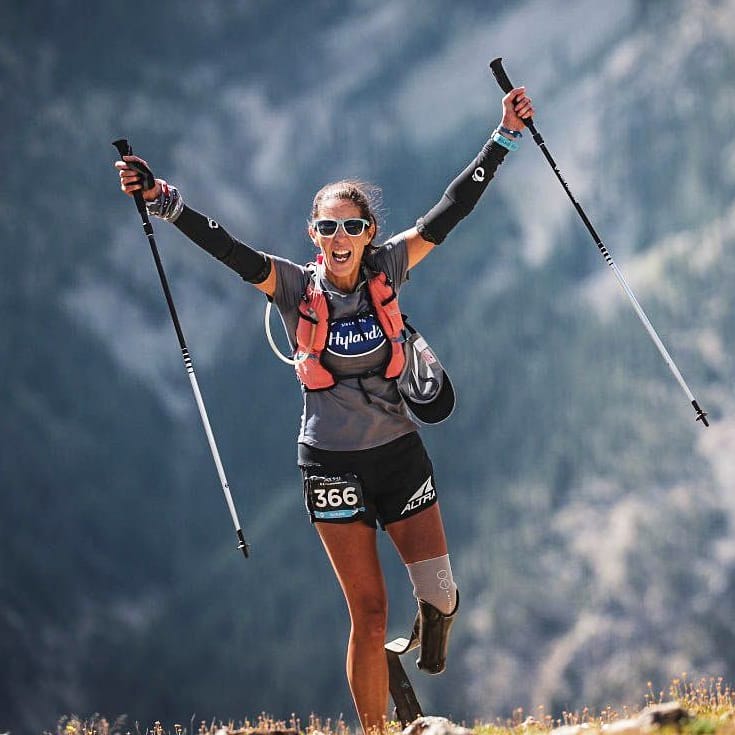 What is your biggest pet peeve? I get frustrated with people who put me in a disability box. I want to compete against everyone and not just people with a disability. One of my favorite quotes is, “Look at my ability, not my disability.”

Another peeve is when people stare or point at me. I’d rather them directly ask me questions about my leg than pretend they aren’t looking when they are looking. That is why I love kids. They come and talk to me or ask me if I am a pirate, with which I usually reply, “Arrrgh,” and then their little faces light up.

What do you do to de-stress? I normally go for a hike.

What are you most passionate about other than running? Helping other amputees, especially kids. I have been an amputee since 2002 and I have a lot of experience. I’ve learned how not to do it and what is possible. I also spend a lot of time talking to new amputees and helping them to see the positive side. Life isn’t over after an amputation. It is just different. It gives me great satisfaction to see someone run for the first time after an amputation.

What book is on your nightstand currently? Let Your Mind Run by Deena Kastor.

If you have a free afternoon to do whatever you want, what do you do (or would you want to do)? I’d probably go to the hairdresser. I haven’t been in years, but then I’d probably sit there thinking about the trails I could be running.

What are three words that describe you? Resilient, courageous and fierce.

If you were stranded on a desert island for a month and could bring one thing with you, what would it be? My running blade. I’ve got to get those miles in.

If you could go on a run with anyone, who would it be? Definitely Camille Herron. She is such a phenomenal athlete and she has done a lot for women’s running.

Where do you see yourself in 10 years? I will still be running and hopefully I will win more races in my age group.

Erika is the Contributing Editor for UltraRunning magazine. She grew up as a soccer player in Portland, OR but turned to ultrarunning when she moved to the Bay Area after receiving her Doctor of Physical Therapy degree from Chapman University. She continues to work part-time as a PT, primarily with the elderly. Erika ran her first ultra in 2008 and has now completed over 30 ultras of distances ranging from 50K to 100 miles. The 100K and 100-mile distance are her favorite.

Thanks for the inside information on technical/physiological aspects of running with a prosthesis. I haven’t seen this anywhere else. Congrats on inviting us into Jacky’s world. Ultrarunning really is a sport for all.