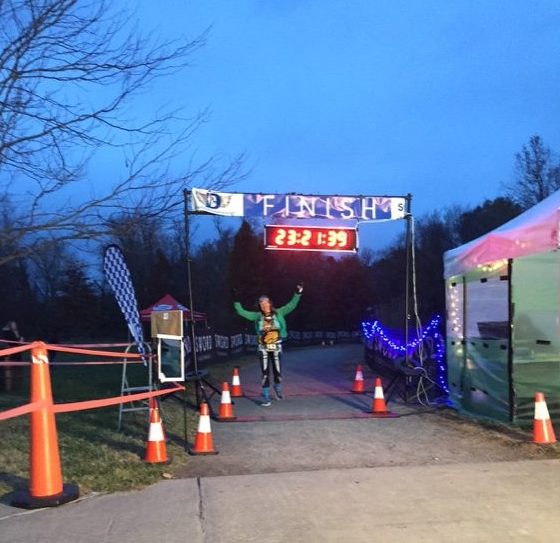 The story of Tunnel Hill 100 2017 will be Camille Herron and rightly so. She was amazing and fast and all the things you would expect of a person setting a 100-mile world record.

This is the story of the rest of us: Those of us who squeaked in just under 24 hours for that special buckle, those who just made the 30-hour cutoff, and those of us running our first 100-miler.

If you are unfamiliar with Tunnel Hill’s claim to fame, let me touch on some highlights. It’s flat. Really flat. It’s crushed stone and hard-packed dirt and, it turns out, has a live train crossing. For a former rail trail, it’s scenic and the top half of the course provides some really beautiful views. And then there is the namesake Tunnel. It’s dark. Wish you had your headlamp dark. Run into the wall dark. Sensory deprivation dark. 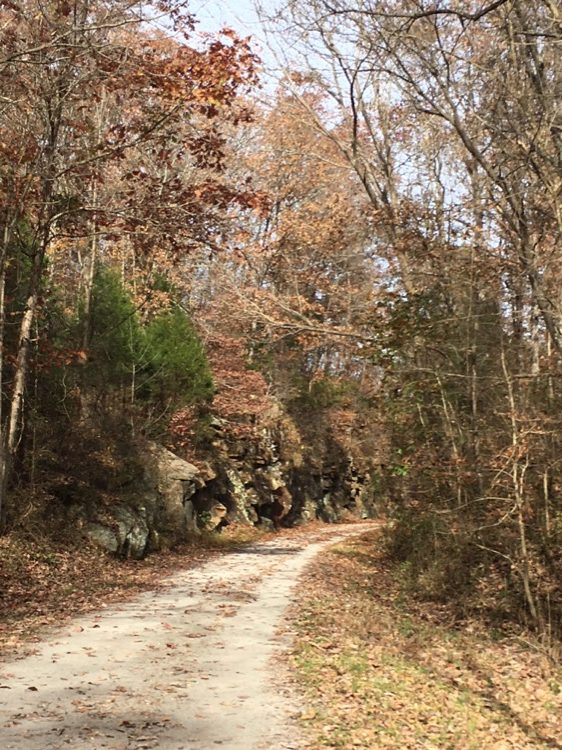 Before Camille rocked it out, prior 100-mile records were set at Tunnel Hill in 2014 by Traci Falbo and by Mike Bialik in 2015. It’s a fast course. The race has its share of famous visitors and speakers, including Lazarus Lake, Gary Cantrell and this year, Traci Falbo.

It’s a two-section out-and-back course starting in the middle and heading south for 13 miles then returning to the start and then heading north for 12 miles then returning to the start. Due to daylight savings time, the headlamps came on around 5:00 p.m. and stayed on until 6:00 a.m. If you are like me, that means you only get to see the whole course once before night descends.

The race started with a 21-gun salute as it was Veteran’s Day. The air was the coldest it would be all day at 28 degrees, but everyone was excited and sure we would not be part of the historical 50% drop rate. I mean, it’s so flat! How could you drop here? The weather was supposed to be good, with only a small chance of rain early the next morning.

The warm-up marathon was highlighted by a train crossing when I arrived at mile 21, giving us all an excuse to pretend to be put-out and then take a selfie. Camille and the other leaders were probably at mile 40 by then – no harm done. 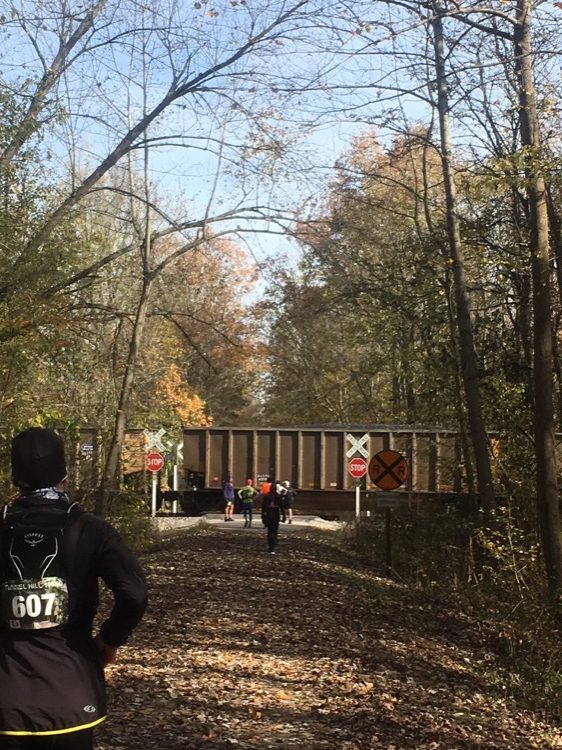 Waiting for the train to pass

With the first 26 miles done, we could take off our winter gear and enjoy the warmer 45 degrees. Aide stations were happy and the crowds there surprisingly big with lots of families and crews hanging out. The top half of the course showcased the area’s natural beauty with huge rock cliffs, lots of bridges and the dark, dark tunnel. I think most of us were still feeling pretty good, except during the six mile uphill section. Not a big uphill, I’ll give you that, but definitely uphill and a long. It slowed you down a little the first time and was torture the second time.

I grabbed my headlamp at that turnaround because it would be getting close to dark by the time I made it back to the start and my next drop bag. No rookie mistake there today. Win.

I made it back to the start, mile 50, with plenty of daylight left in 10 hours and felt pretty great. I was right on pace. I had a few niggles in one hip but other than that no real issues. Time to pop in my book on tape and relax into the night. Not quite. This is where the run/walk demon started. It felt so good to walk. The niggle in my hip almost went away, nothing hurt and I was only two minutes slower than my goal pace when I walked so… the next thing I knew I had found a walking buddy and we had covered about six miles without a jogging break. Oops. I lost a glove somewhere in there but eventually got around to running again and made it to about mile 74 before walking again.

My headlamp started to blink and turned itself to low-power mode; it just needed to last two more miles until I could pick up another one. I walked into the starting area at mile 76 only a little behind my goal time of 13 hours to pick up my amazing husband/pacer and finish this thing. He asked if I could keep up the same pace for the last 24 miles and I replied, “Of course!” A speed-walking pace? I could definitely do it.

I spent a good ten minutes too long trying to find my other warm gloves in my drop bag. Here is a tip you don’t find on all the “first time lists”: don’t pack black gloves in your drop bag and expect to find them in the middle of the night. I finally found some lightweight ones and popped them on instead. No biggie.

All the food had been moved into a warming tent. I grabbed some broth and my husband told me everyone in there had DNFed. I felt like he said we were walking among plague victims. “I gotta get out of here.” I took off down the trail and apparently forgot to tell him because I got a text five minutes later asking where I was.

This was bad. By the time I made it to the aide station at mile 86 my hands were shaking so bad from the cold I could barely hold my broth. Not finding those warm gloves at mile 50 turned out to be a big deal. I didn’t dare sit down for fear more joints would lock up. I hadn’t planned on walking that much so I wasn’t dressed for the cold. Lesson number two learned: You may slow down so much you freeze your butt off. Pack a warm jacket, maybe a scarf and hand warmers. It started to snow.

With two miles to go until the turn around, we passed a guy walking who was covered head-to-toe in a blanket. All I could think is, “Where did he get the blanket? I want one.” Turns out he had sat at the aide station for an hour and was on his way back out (he finished ahead of me just fine).

I had 12 miles left and no idea how I was going to do it. My hips were throbbing with pain, I was freezing cold and had no positive thoughts in my head. I kept thinking of a quote I read from Gordy Ainsleigh which basically boils down to: “What can I still do? I can put one foot in front of the other.” Lots of other runners and pacers passed us, every one of them saying nice, encouraging things. I grunted back at them. I told my husband his job was to say, “Thank you, you too.”

One foot in front of the other. Back to the seven-mile section with no aide stations and ten miles to go. How am I going to do this? I’m doing freaking 18-minute miles; it’s going to take over three hours! How do I even fuel for that pace? Three hours. This sucks. I told my husband to turn on some music with eight miles left to go. I figured out that one mile was taking me about five songs. We are going to go five songs. And that is what I did for almost three hours: go five songs at a time.

My husband left with a half-mile to go. “See you in ten minutes,” I laughed ruefully. A stupid song came on, “Hello” from the movie Trolls. Really? This is how I’m ending this, listening to a sad song from a kid’s movie? Thankfully, I was moving so slowly that when I made that last glorious turn and saw the finish line, “Hallelujah” sung by Rufus Wainwright came on.

I smiled. I took off my headlamp. The sun was up and I crossed the line in time to get my sub-24 buckle.

Fantastic/Awesome job Becca. Words cannot describe how your life has impressed me….When words fail me it is a first. You are a first sweet heart……………………