The NURVV Run are smart insoles that can be inserted beneath your shoe’s existing footbeds in order to provide unique data such as foot strike and pronation information. The NURVV Run system also promises to improve your running through live in-run coaching, a holistic health score and additional resources to improve technique. 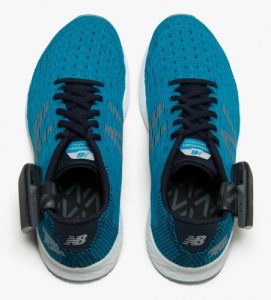 Battery placement outside of shoes

The look and feel of these insoles gives off a sense of being very cutting-edge, with a high-end feel. Given that we were about to stick them in our shoes, the product’s durability made us a little nervous because of the small electronic features.  We also had some initial concerns about adding weight to our shoes, as the batteries are substantial. They are just heavy enough to feel, and on longer runs, we could definitely feel a cumulative difference from the added weight that ranges anywhere from 4.4–5.3 ounces depending on the size of the insole.

Installing the footbeds was as simple as sliding them under the insoles and clipping the battery in place on the outside of the shoe. With six sizes available, they are intended to fit all running footwear from a women’s size 5 to a men’s size 15 (US). At first, we were very cautious about the installation due to their delicate electronic features, but by the end of testing, we had installed them on different pairs shoes approximately 10 times. 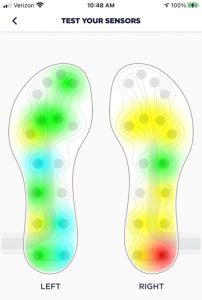 We found the foot strike and pronation data from trail runs to be statistically meaningless, as trail conditions often take precedence over form on technical terrain, and the resulting data wasn’t particularly useful. The numbers only become consistent on hard surfaces, so this product is best used on the road or even terrain. Also, from a practical standpoint, the real-time coaching feature doesn’t take elevation profile into consideration and wouldn’t really be feasible for trail use. For road use though, the NURVV Run worked as promised.

During our use, the insoles needed to be charged four times, right on par with their claim of 5.5 hours of use between charges. A side note about charging: we broke our charger, which is proprietary, during the testing period. The company happily sent us a new one, but the design of the USB cord interface with the charging “clip” feels problematic, as it puts the cable in a position that is likely to be pushed against when removing the pods. Another quirk is when a software update gets pushed out, the unit is required to be plugged in. So we were unable to use the insoles while waiting for a replacement charger.

The core of the NURVV Run experience is the app. There are five main tabs, with information collected from your activity. Single-run data as well as cumulative info is provided, along with resources for improvement. All GPS data, like map track, time elapsed, distance run, pace and elevation, are available. Additionally, it generates more nuanced data points and summaries, like training load, pronation, foot strike, step-length, cadence, balance, and a Running Health score that is a snapshot of all these factors in a single matrix. For those running on a treadmill, the app can even show you real-time foot-strike information. From a pure data collection standpoint, the NURVV Run has enough for even the nerdiest of data geeks. 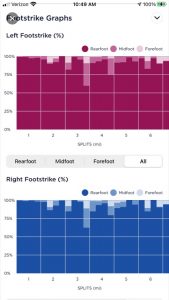 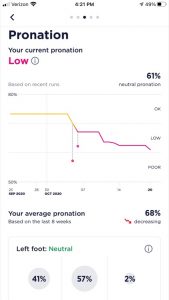 The real-time coaching feature works, but with a small asterisk. We were unable to get the stride length (determined by accelerometer) and cadence ranges to line up perfectly with pace range. The coach uses audio cues to indicate if you should increase/decrease cadence and stride length during the run based on the target score you selected (think “pace”)—but in our testing of this feature, the resultant pace was slightly too fast. These ranges are user defined, so with some trial and error you can probably find the ideal range to satisfy the coaching cues. 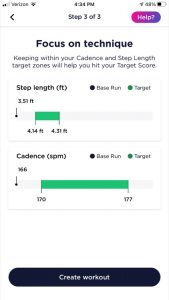 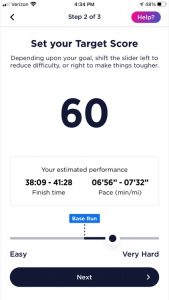 If you’re a runner looking to take your training to the next level or shooting for a PR, then this product can help, with some caveats (see below). The primary benefit we see with NURVV Run is the ability to guide adjustments in your running form, which could be important if you have experienced injury due to foot strike or pronation issues. There’s even some potential for them to help with proper footwear selection based off of actual pronation data instead of visual analysis.

However, the unit retails for $299.99, and is designed to last for 1,500 miles. And if you’re someone who likes to rotate shoes, it takes a few extra minutes between each run to switch the insoles around. But the biggest hurdle we see is that many GPS smartwatches are providing almost all the same data and analysis as the NURVV Run—and they’re much simpler to use, have much larger feature profiles, and have an indefinite lifespan. The NURVV Run is available from www.nurvv.com.

Running the Mines of Spain