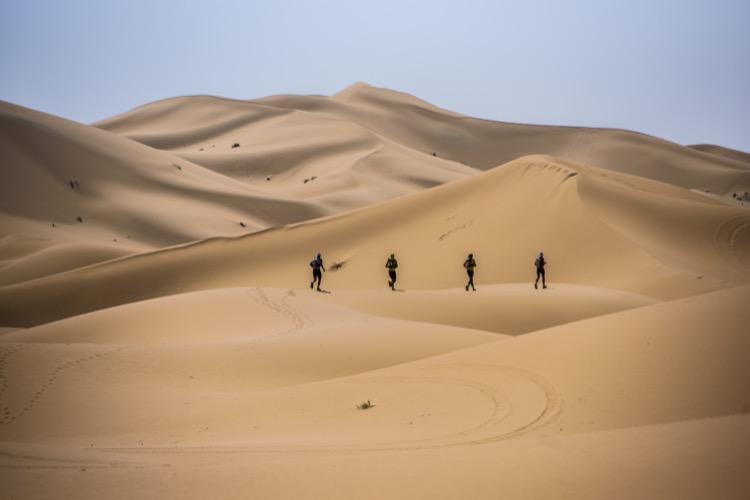 Editor’s note: This is Part two of a three-part series.

The long stage is the most feared stage of the race. This year, for the 34th anniversary, it was sandy and hot. Not really a day at the beach.

I am impressed with the elite runners. The long stage was 47 miles and had to be run in under 31 hours. While it was shorter than usual, it was just as hard as expected. The heat, sand and darkness were a deadly combination for everyone. Dehydration, blisters and exhaustion awaits like a daily threat. A friend of mine stepped on a deadly viper while closing in on the campsite after hours of running. He said he didn’t have time to think before it was too late. He stepped directly on its head and killed it instantly. Not on purpose – it was just an accident. In half a second, he witnessed his foot hit the snake’s head instead of the ground. Had he landed 3-4 inches to the left or right, the viper would have probably bitten, and fatally injured him.

Elite Damage Control
The El Morabity brothers, Rachid and Mohamed, are still in charge. They were way ahead throughout each stage. But the most interesting character of the bivouac this year (aside from Cactus, the local stray dog who followed us from day two), is Ragna Debats from the Netherlands. She lives in Spain and is currently the World Champion of Skyrunning. Clearly, with her 13th place overall, and first woman by more than three hours on Gemma Game from the UK, she’s the gazelle of this event.

Fatal Strategies
After taking it easy most of the day, I ran between check points and spent up to an hour at each one. They were an opportunity to let my destroyed feet take a break and dry up. Check points are usually separated by 6-8 miles and when I reached number five at mile 31, I was tired, hungry and in pain. Like many others, I decided to lie down in a tent. Wrapped in my warm sleeping bag after more than 12 hours of racing, I fell asleep within minutes. I woke up at sunrise and continued the race with only 10 more miles to go. At that stage, 90% of the peloton had either reached the finish line of the long stage or DNF’d. Only a few other runners – injured, disoriented or seriously physically impaired people, had to cover those last few miles in the heat. But having a real night of sleep under some southern stars is not always a bad idea.

Most rush to the bivouac at all cost, reaching it around 3 a.m., exhausted, with the entire next day to rest and lick their aggravated wounds in a heated tent. It may sound great, but it’s not always the best. I reached among the last top 50. But who cares? I didn’t come here to win. I came here to finish and enjoy. I avoided the boredom of camp for an entire day, as there is absolutely nothing to do once you pass the finish line. I also avoided having no choice other than to nap inside a 100-degree tent. Strategies. We all have different ones. Sometimes it pays to be a winner, yes. But sometimes it pays even more to let other people think you’re the loser.

Note: The French TV journalist who assaulted me (and was surprisingly permitted to go on with the race) DNF’d during that long stage. The Sahara has done justice. Bullies don’t belong here.