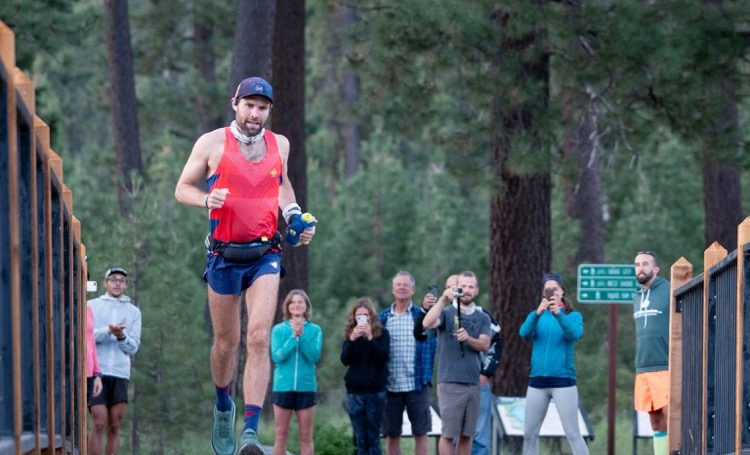 After finishing in fourth at the Tarawera 100-miler in New Zealand, Adam Kimble had high hopes for the 2020 season. Closing out 2019 with some disappointment at the Leadville 100 and his first supported Tahoe Rim Trail (TRT) Fastest Known Time (FKT) attempt in October 2019, his plans included some shorter races in the spring to gear up for a bigger race on the TRT. As a Lake Tahoe resident, he naturally had his sights set on George Ruiz’s Tahoe Rim Trail 100 miler slated for July 18.

Kimble felt fortunate that all the races he was running made the determination to cancel early on in the pandemic (including Ruiz’s race), so he didn’t have to wait around to make alternative plans. Although the TRT 100 is just two 50-mile loops on the northeast side of Lake Tahoe, logistically, other elements lined up nicely too. His support crew was already planning to come out that weekend to help, and he felt both his body and mind were in a better place than they were last year to give Kilian Jornet’s record of 38 hours and 32 minutes a real crack.

“It was a great time to reevaluate and look at other possibilities. I was planning to run and train out there and be on the trail a bunch, so it led to an easy decision to give it a go,” said Kimble.

The combination of living in close proximity to and training on the TRT frequently over the last four years, as well as his unfinished business from his 2019 attempt, ultimately made the choice an easy one. 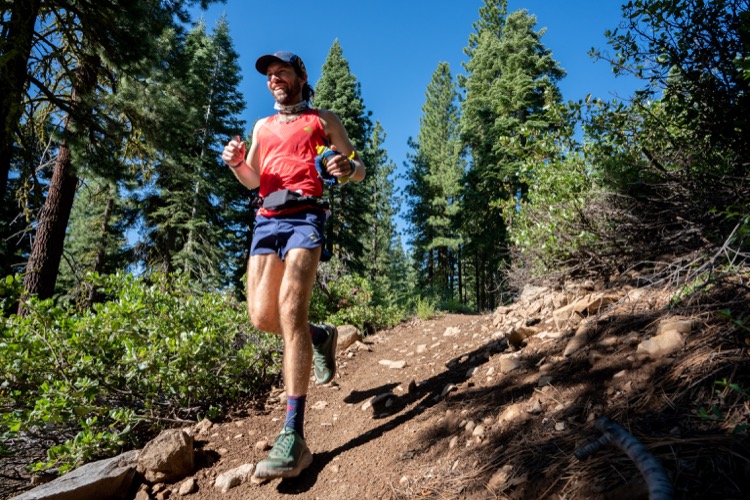 For the second time around the Lake, it was all about ironing out the mistakes he made the first time. He missed his crew at mile 30 and was forced to run the first 40 miles of his clockwise loop solo. That ended up putting him in a big hole and nearly forced him to quit prior to the halfway point, before he eventually charged on to finish in just over 45.5 hours—good for the second-fastest time ever.

“It was cool to have all this communication with all these people in such a short period of time,” Kimble continued, ”but also really invigorating and inspiring and fun to see them (Candice, Helen and Kyle), and even though I couldn’t help them, I was tracking them and following along.”

Kimble actually chatted with Curtin three days before his attempt, offering a bit of sage local advice to his fellow ultrarunner. “Seeing Kyle shave so much time off the unsupported and come pretty close to Kilian’s time, that for me was eye opening. If Kyle can do that with no help, hopefully I can do better than that with a bunch of help,” recalling how it became hard to contain his excitement for getting out on the trail for his own TRT endeavor in the final week before his attempt. 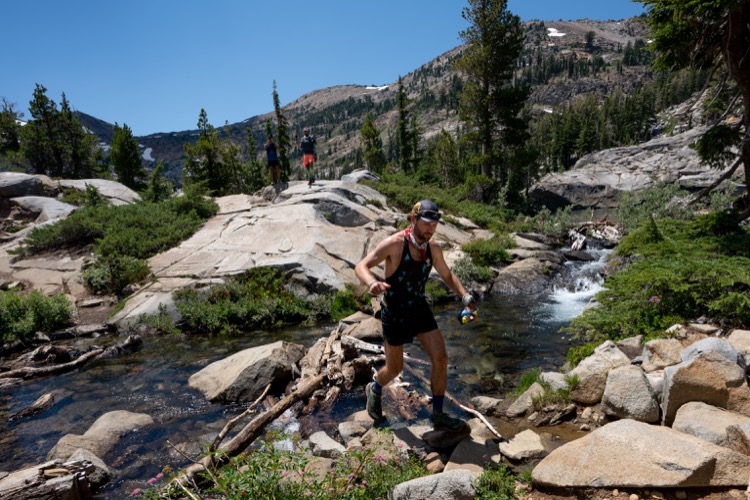 This time, for the first quarter of the loop, the experienced veteran Bob Shebest joined Kimble from miles 20-40, and a couple of other friends hiked up to different areas of the trail with crewing accessibility issues, carrying small coolers and words of encouragement. Additional help in the beginning of his attempt helped take the pressure off his crew and made all the difference in setting him up for success as he started to move onto the west shore and gain momentum. He ran into only minor issues the rest of the way, chiefly spending a bit too much time at a few refueling locations, and crossed his finish line in Tahoe City with a new FKT of 37 hours, 12 minutes and 15 seconds.

“I love the supported effort from the standpoint of that it’s really fun to get your core group of people together, your team in life, and go after something together,” Kimble said reflecting on the experience. “Yeah, it was me running, but it was my team doing everything else and making it all happen. I love that team aspect (a nod to his collegiate baseball career). The camaraderie of that is a big part of what draws me to supported stuff.”

“On the flipside, I love the purity of just getting your stuff, no one else around, and doing it. That’s really appealing. To say that I’m not curious about doing the TRT unsupported would be lying.” 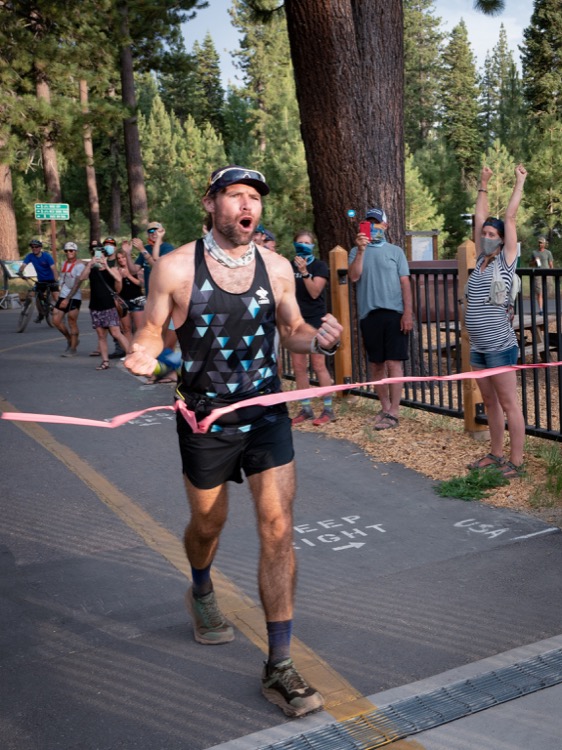 Kimble’s not moving on to his next project too quickly though, savoring the joy he’s spread around the greater Lake Tahoe area this summer. “Seeing the response, especially from the locals in the community has been incredible, we were feeling the trail magic,” he said joyously. “The support of people I didn’t even know that I was coming across on the trail who were encouraging and being a part of it in all these different ways was really special.”

Word had travelled relatively quickly that he was out there running for the FKT and multiple times he recollects others out on the TRT exclaiming, “Go and get this record for the Tahoe locals!” as they passed by.

“These sorts of adventures always bring out the best in people. That’s one thing that keeps drawing me to them. I like to look at it as a way to inspire goodness; to inspire treating each other kindly. I got that a lot on my run across Great Britain and even more so here on the TRT. It was powerful to witness that, beyond sport, in a way.”

He continued to ponder the thought, “You’re doing something sport related, but it snaps you into a sense of, this is how the world should be all of the time. That in a large way is what keeps me coming back for more on these types of things. You get that love in races, but there’s something different during an FKT, where people who aren’t a part of the community will still be involved. It draws them into it too and amplifies the experience for everyone.”