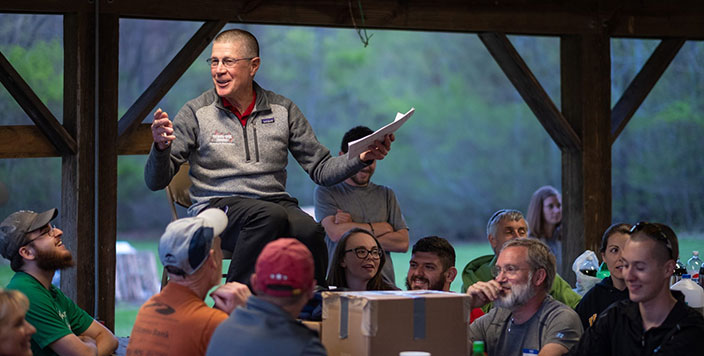 When I first started running ultras I remember reading about the Hellgate 100K, and was immediately intrigued. The race is in mid-December, starts one minute past midnight, and is a challenging mountain race (it’s also actually longer than 100k). The most common injury at the race are “Hellgate Eyes” – an affectionate name for frozen corneas. Over time, I became equally intrigued by the creator and race director, because what type of mind thinks this stuff up? The answer: Dr. David Horton.

I’ve since run numerous Horton races over the years, and they are well worth the 10-hour drive from my home in western Massachusetts. While they are well-organized and located on beautiful trails, what makes Dr. Horton’s races different and truly extraordinary is Dr. Horton himself.

At the pre-race meetings he will place a chair on top of a table, sit down and tell stories for about an hour as the entire audience listens intently. Sure, he’ll sprinkle in important info about the following day’s race, but he’s mostly trying to entertain and engage folks as he talks about witnessing amazing finishes, or who won the ‘Stupid Award’ and why they deserved that honor. My favorite story was of one recipient who got a second degree burn on his butt after getting a little too close to the bonfire at Hellgate’s aid station at mile 25.

The night before the Holiday Lake 50K (another Horton race) this year, I shared a cabin with several local college students who were taking Dr. Horton’s Advanced Running course. He’s been a professor of health sciences at Liberty University for 40 years, introducing college students to the joys of ultrarunning. I often wonder how many of his students understand that their professor is a celebrity in the sport, winning JFK 50 and Hardrock 100 (twice), holding the FKT on the Appalachian Trail and Pacific Crest Trail, and was one of the first finishers of the Barkley Marathons. I laugh when I think that while Dr. Horton might have prepared his students well for their first ultra, he didn’t quite explain some of the basics of endurance running which led to my favorite question, “Where do you apply Body Glide?”

Dr. Horton genuinely cares about all runners at his events and makes everyone feel special. He takes the time to say hello to each and every runner at registration – hugging those he knows and introducing himself to folks he doesn’t. At the finish line, he’ll not only greet every runner with a hug or handshake, but he’ll use a megaphone to share a story, announce a random fact, or find a way to embarrass and/or celebrate them. When I won the Holiday Lake 50K this year it was the first time I had won a Horton race, despite him constantly cursing me with bib number 101. After a giant bear hug and a selfie (so he could post it on Facebook), he then grabbed the megaphone and proceeded to announce to everyone that this was my first Horton race victory. He was equally as enthusiastic, however, after each runner crossed the finish line.

Of course, the most well-known fact about Horton races is that they are measured in ‘Horton Miles.’ His races all tend to be longer than advertised and Hellgate 100K is, ironically, 66.6 miles. When asked how long a Horton Mile is, he responded, “It’s probably about 1.1 miles. However long I say something is in terms of miles, it seems to be longer. I don’t do it on purpose, it just happens.” I suppose we can trust that whatever Dr. Horton has in store for us at his next race is bound to be longer, but always equally entertaining.