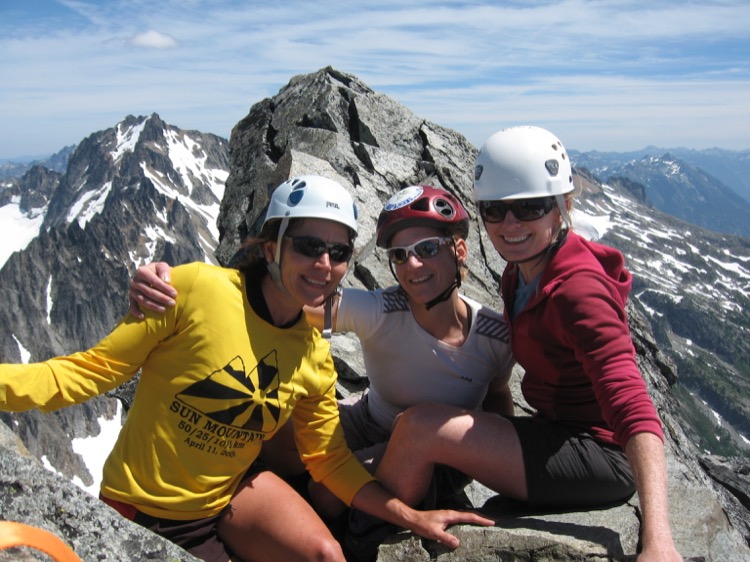 Deb McInally, Michelle Maislen and Sophia Walker on the summit of Sahale Peak in the North Cascades.

What is grit? The first thing that comes to mind might be a grizzled cowboy, a seasoned athlete, or someone in an extreme life circumstance, struggling to survive in the face of seemingly insurmountable odds. In considering grit, we often think of those big moments when life tests us – surviving the loss of a loved one, bouncing back after the failure of a business venture, or finishing strong in a tough race.

Wikipedia defines grit as “perseverance and passion for long-term goals.” But where does it come from? Are we born with a certain allotment of grit? If it’s a skill, how do we develop it?

I think real grit is born in the mundane. It is a courage and resolve that is forged in daily habits and consistency. It’s created slowly over time and grows each time we respond to challenges by rising to the occasion. Grit is the decision to take heart when things get tough.

Grit is a muscle developed in “character building” situations. It is less about motivation itself than how we respond when motivation wanes. The stoke is not always high. Gritty individuals stay consistent, without being deterred by setbacks, trusting that the they’ll be feeling it again soon enough.

Grit is not simple stubbornness. It the accumulated coping strategies that help us through emotional or physical low points. Grit is leaning in when you feel like checking out. It is the ability to find strength during times of vulnerability or doubt.

I’m fortunate enough to know dozens of extremely gritty people, from my best friends and family, to fellow members of the ultrarunning and outdoors community. Here in New Zealand, grit and mental toughness are simply a way of life, so embedded in the Kiwi psyche that asking one of them to define it would be like this joke from David Foster Wallace: One fish asks another fish, “How’s the water?” The other fish replies, “What the hell is water?”

Picking one gritty friend to use as an example isn’t easy, because so many of them have such big hearts and staggering levels of mental toughness. This time I’ll have to go with my friend Michelle – an ultrarunner, multisport athlete, self-made businesswoman, mountaineer, and all-around badass. She’s a person I’ve never seen break. She has no breaking point. She has as many weaknesses and issues as the rest of us, but that girl has no quit in her. She looks adversity, suffering, pain and the threat of failure square in the eyes and says “Boo!”

We call her “Mishka” because we think she may actually be a Russian spy. She is of course gorgeous, impeccably dressed, jarringly intelligent, and makes everything look easy. She has a love of fast German cars, a curiously extensive grasp of technology, and often pops out with unusual proficiency at skills such as how to skin an animal or fix a motorcycle. We often wondered if her long stretches of “alone time” were actually secret rendezvous with her contacts.

When things got tough, you called Michelle. Not because she’d fix things for you, but because she fosters the same level of mental toughness in the people around her. Without having to say much, she encourages people to rise to the occasion, to do things the hard way when you know it’s the right way. She does this gently and with kindness, recognizing the struggle when it’s there. Michelle helped me navigate through a number of low points in my life, but more importantly, she showed me how to grow my own grit, one decision at a time.

As much as I thought I’d just choose one example of a gritty individual, I have to mention my friend Deb as well—Michelle’s running/adventure partner and long-time friend. The two of them are tied for first in the Grittiest People I Know category.

Deb is different from Michelle in that she looks gritty – strong, muscular, intense, and direct. She does pull-ups until her hands bleed. She hucks off huge drops on her mountain bike. She competes in 200-mile mountain running races. She skis, climbs, and wins most things she does. She expects nothing less than the best in the everyone she meets and lifts them up to where they could be. When things go haywire, she always seems to know “the right thing to do” and acts on it when most of us are hiding under a rock somewhere. Deb’s grit is a way of life. She wakes up, gets shit done and keeps stoking the fire with new inspiration.

The two of them together could probably overthrow a country somewhere if they wanted to, but instead, they choose to enjoy the excitement of outdoor adventure and spend their down time nestled in their homes in the mountains just outside Seattle. Neither of them are hardened people. They’re secretly big softies, kind and supportive friends who love cuddling cute animals, pampering themselves and making their homes warm inviting sanctuaries.

Getting to know them changed my perception of what it meant to be tough or gritty. It’s ok to cry, freak out, and be the vulnerable insecure mess that being human entails. What matters is how we respond in those moments. We can be vulnerable and strong at the same time. Grit exists not despite that vulnerability, but because of it.

Deb McInally, Michelle Maislen and Sophia Walker on the summit of Sahale Peak in the North Cascades.