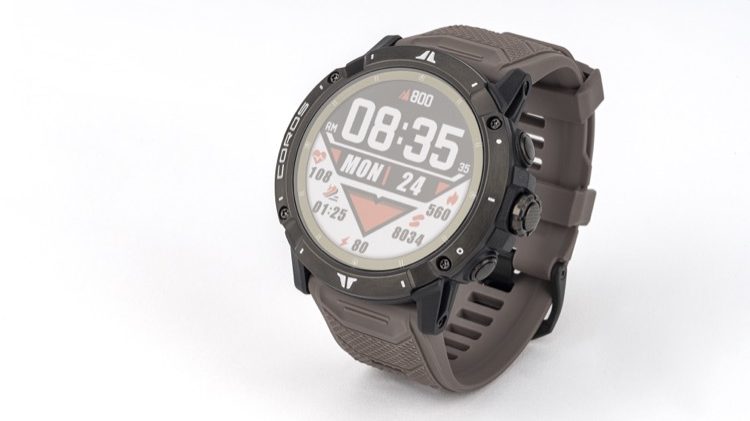 Throughout its relatively short tenure in the GPS watch category, COROS has established itself as a brand actively pushing the limits of feature sets. This is apparent in the new Vertix 2, which adds a large number of feature upgrades from the original model – including updated satellite capabilities, a larger display face, new sport modes, navigation maps, onboard music functionality, faster overall processing and a massive increase in battery life. All of this comes at a price point $100 higher than the original Vertix.

The layout and basic operation of the Vertix 2 is similar to the original Vertix. Functions work through a combination of two buttons above and below a central rotating bezel, along with touchscreen capability. The rotating dial is a polarizing issue among users; we’re not fond of it, but others find it useful and COROS seems determined to stick with it. The bands attach with a quick release system that allows you to swap them out with various styles and colors. From the primary watch face, you can scroll down to see customizable widget glances that are similar to those on Garmin devices; tapping on any one of these opens a separate screen with more in-depth information about that particular metric.

Sport mode and data screens within each mode are customizable in the COROS app, but not directly on the watch itself. COROS continues to be entirely app-based rather than having a desktop platform and to their credit, the depth of information in the app and ease of use have improved significantly since they first debuted. However, there are some instances when this setup becomes problematic, primarily in navigation features which we’ll discuss in a bit. An improvement in this area over the previous version is the physical size of the watch. With a screen size of 1.4 inches, the Vertix 2 is able to accommodate eight data fields per page during an activity. We found this helpful on race day when swapping between data fields was more of a distraction. The watch itself is also built just like its predecessor and is very durable while maintaining a lighter feel on the wrist, coming in at 89 grams with the silicone band option.

One key feature update is access to multiple satellite systems. The idea is that in certain conditions (such as narrow canyons or urban environments with tall buildings around), or in certain parts of the world, some satellite networks are more difficult to ping than others – so, if you can access multiple systems all at once, your chances of GPS accuracy improve. The Vertix 2 gives you three modes to choose from: Standard, All Systems On and All Systems On + Dual Frequency mode. Breaking those down, the Standard GPS is the default setting commonly found on most GPS wearables, utilizing GPS and GLONASS; GPS readings are taken once per second and the Vertix 2 claims 140 hours of battery life in this mode. All Systems On mode utilizes GPS, GLONASS, Galileo, Beidou and QZSS satellites at once and significantly increases the amount of satellite availability to the user but drains the battery life down to 90 hours – which is still pretty amazing. The final mode utilizes dual frequency GPS with all aforementioned satellite services; this is especially helpful in bigger cities or along larger obstacles that usually block precise satellite location but drains the battery even further to 50 hours of run time. During our testing we found that the All Systems On mode was more than effective in what we were using the Vertix 2 for on a daily basis. When we tested the dual frequency mode alongside a traditional device, or in comparison to doing the same run with the Vertix 2 in All Systems On mode, the tracking results were not substantially different.

Perhaps the most anticipated feature on the Vertix 2 is the inclusion of navigation maps, which were noticeably missing from the original. The Vertix 2 comes with topographical, landscape and hybrid map options. It is noted in the specs that using maps during an activity drains the battery at a higher rate, but during our testing we didn’t find this to be a major problem – yet another advantage of having a massive base battery life. One major drawback to creating maps is that there is no route making availability within the app, leaving the user only able to input pre-fabbed GPX files. For our testing, we pulled the majority of GPX files from Strava and race websites, but for more specific training/exploring routes an additional app like AllTrails is needed. COROS does make world maps available for free on their website which is a big plus, one only needs to download the region they are living/traveling to and download it to their device. By comparison, for Garmin and Suunto devices, map creation is relatively easy through their web platforms, so this is one aspect where COROS suffers by comparison operating only through a mobile app. 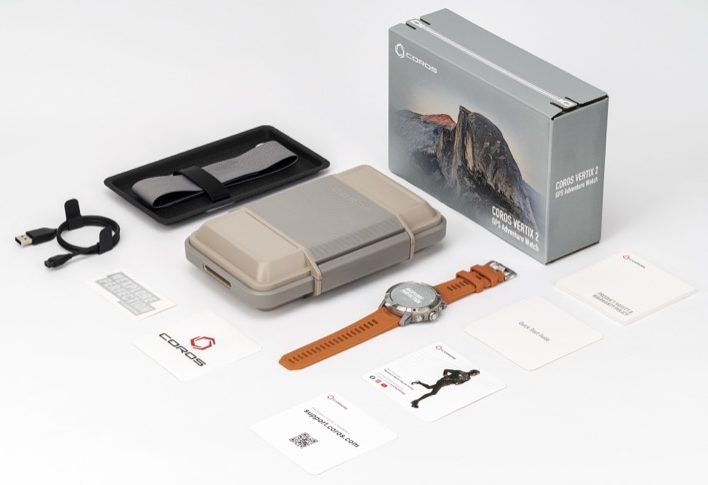 For our testing, we used topo and hybrid maps and it was good enough to keep us on the right trail and gave us a good sense of direction in the backcountry. The mapping is basic, not nearly as advanced as other GPS wearables and it should be noted that the mapping is breadcrumb based. There are no road names or fine details but for basic navigation it was sufficient. While this is an improvement over no maps at all, breadcrumb navigation does mean that there is no turn-by-turn directions or back-to-course routing. A small carrot does appear on the screen at the bezel edge which guides the wearer back to the course should they veer off, which is helpful as well as a fairly accurate off-course alert. We did use this feature for a race with a pre-loaded GPX file, and the main issue we had was the map orientation on the watch itself not being able to lock into place. This seems like a minor fix and with the speed at which COROS updates and troubleshoots we hope to see this as part of an update in the not so distant future. It should also be noted that COROS is one, if not the only company that is backdating software updates to be compatible with previous models. Maps and other smaller features should be available on the original Vertix soon.

Another major update to the Vertix line is the battery upgrade. Battery life seems to be the modern-day arms race of GPS watches; when we published our Garmin Enduro review in June, we noted that its battery life leapt over all competitors in this category, but now COROS has returned serve and nearly doubled what the Enduro offers. From the initial time we received the watch, we did all the updates required and then did an “out of the box” test. We charged it to 100% (which took only about an hour and a half) and then ran it down as low as we could. For this test we chose all the basic recommended settings including daily HR monitoring and All Systems On GPS navigation. The Vertix 2 performed very well, coming in with 24 days of continual use including a training volume of at least one hour of GPS use per day. It wasn’t until day 25 that the Vertix would not let us start an activity with the amount of power remaining, and our battery chart on the watch displayed these stats: 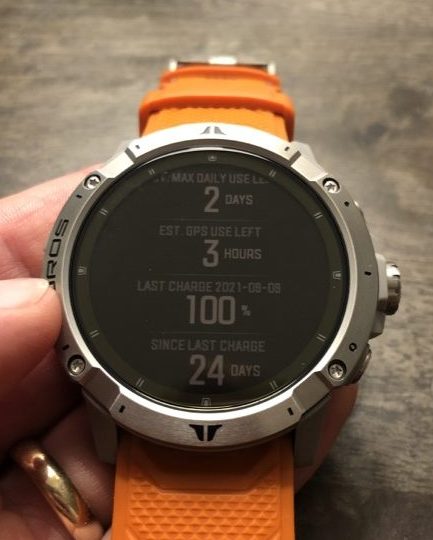 From this testing, it is clear that the Vertix 2 comes packed with massive battery power and has a lot of options for the user to stretch out the life of this watch between charges. We suspect that if daily HR monitoring was turned off our numbers would have matched up to what the spec claims are. Even if you don’t need over 100 continuous hours of GPS use, the benefit of having such a large battery life is that you can use features which traditionally drain the battery faster – like maps, music, continuous HR or SaO2 monitoring – without worrying about having enough battery life to finish ultra-length activities. 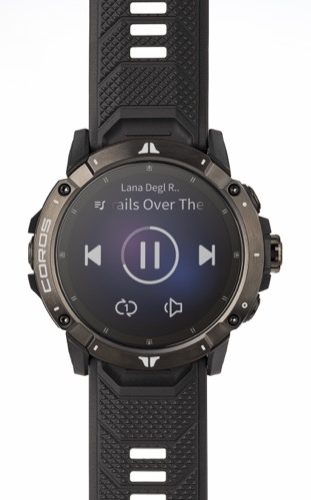 The final new feature that interested us was having music capability on the wrist. This is seemingly thrown in as an attempt to match feature sets with Garmin or Polar, but in practice, is not particularly convenient to use and adds limited value to the device line. Basically, you have the ability to transfer old-school MP3 files from a personal computer to the watch’s memory via a USB connection; you can’t access third party apps like Spotify, Amazon or Pandora, and you can’t do any playlist configuration over wifi. Once music is downloaded, you can connect to headphones through Bluetooth and control playback directly from the wrist, which works quite well. However, since most people rely on streaming services rather than storing MP3 files on their computer, the ability to actually use this feature may prove increasingly limited. COROS may have restrictions in licensing with some of the aforementioned apps, so it will be interesting to see how they develop this feature moving forward, or if they decide to simply not bother.

While the new Vertix 2 comes packed with upgrades and attractive new features, the price bump puts it squarely in the high-end device category, so it’s tricky to clearly recommend it over some of the more established models. Some features like navigation and music storage (and depending on your preference, user interface) don’t compare favorably, and health metrics are generally equivalent, but the battery life is far and away the best available at this time. COROS has a track record of backfilling and improving feature sets on an ongoing basis, but for the time being there is a lot of ground to make up in some key areas that true adventure athletes rely on. We’d love to see the improvement continue with these aspects, as the Vertix 2 has the potential to be a legitimate competitor to the more established brands.

The COROS Vertix 2 and accessories are available at mobile.coros.com.

Thank you for this review…….it was excellent. I just received an Email offering me a $100 credit (for trading in my current Coros model—-Pace 2) to put towards purchase of the Apex or Vertix models. This review answered just about all of the questions I had.

Thank you so much for sharing this comprehensive and very detailed review. Thinking about purchasing this when I get my December bonus. Road to fitness it is!

Thank you very much for offering such an in-depth and analytical analysis.
Thank you for taking the time to write this review.
It was fantastic.
It’s the path to health!