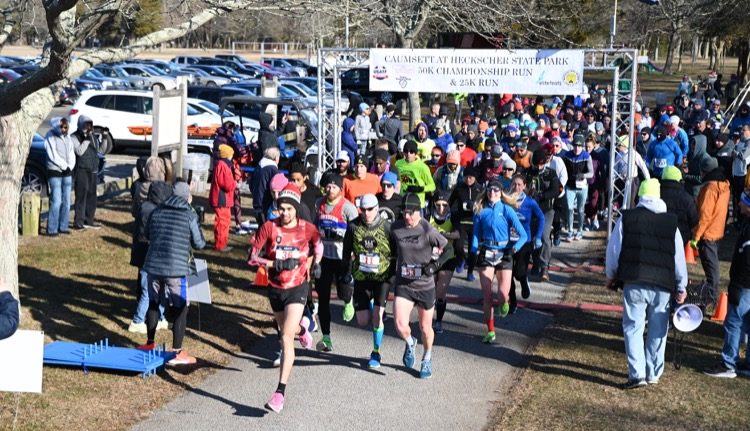 From an inside vantage point, Heckscher State Park looked absolutely beautiful. The sun was shining, there was no wind, and the temperatures were comfortable. But that was from inside. Out in the elements, the sun remained, but the wind was brutal blowing off of the Great South Bay. As evidenced by the frozen puddles, the temperature was well below freezing and combined with the wind chill, it was typical of an Arctic day. The course was a loop which meant that half of the time runners were heading into the wind and the other half, they were also heading into the wind (not a typo). As any runner knows, the wind is seldom at your back, even on a loop out-and-back course.

The certified 5k course on the paths of Heckscher State Park in East Islip, New York, was pancake flat. Minimal traffic provided an open course with beautiful views of Great South Bay and Fire Island. The race was moved from Caumsett State Park to Heckscher due to construction in Caumsett.

Despite the weather, there were 65 hardy runners entered into the USATF 50K championship race with many others in the open 50K race, as well as a 25K. Promptly at 8:30 a.m., the race started, as did an increase in the wind velocity. But ultrarunners are a strong and tenacious group, and nothing stood in their way. 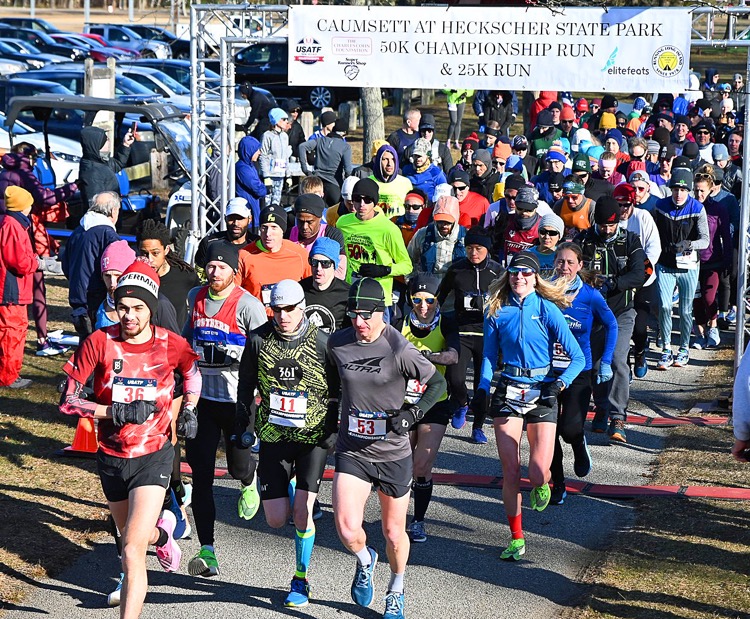 With the Olympic Marathon Trials being held on the day before Caumsett, there were several runners missing from the lineup. Additionally, this race would serve as a selection race for the 2020 US team that will be competing in Jordan on November 27, 2020. The top male and female receive automatic selections to the team as long as they run the qualifying times of 3 hours or better for the men, and 3:33 for the women.

Matthew Dewald, of Dakota Dunes, SD, took the immediate lead in the race with a 17:09 first lap, followed by youngster Kallin Khan, of Lisle, IL in 17:19 and Cole Crosby, of Princeton, NJ in 17:47. In a pack of four all at 18:11 were Michael Wardian of Arlington, VA, Sam Skeels of Adrian, MI, Boyd Carrington of West Islip, NY, and Stewart Jones, of Pittsburgh, PA.

The order for the top three men remained the same through 20k. Wardian was also in close pursuit, losing the pack behind him at 20k. Close behind Wardian in fifth place was Skeels. At 25k, Khan took over the lead and was 7 seconds up on Dewald, as Crosby began to struggle and Wardian was holding steady, clicking off 5k splits with Skeels right behind him. Positioning held until 40k at which point Wardian overtook a determined, but tired Crosby. Meanwhile, Khan’s lead over the field grew slightly with each 5k loop. The order at 40k remained until the end.

Kallin Khan crossed the finish line in 2:57:21 as the 2020 USATF Men’s 50K National Champion. Behind Khan just 1:44 later was Matthew Dewald who ran a great race, challenging Kahn for much of it. Rounding out the top five was the effervescent, gracious and cheerful Wardian, who ran consistent 5k loops and took a solid third place in 3:06:10 (first masters), followed by Cole Crosby in 3:10:05 and Sam Steel (second masters) in 3:11:11. 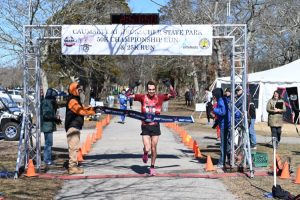 In Kahn’s words, “I knew I was in shape to run around 2:50 if the weather was perfect, but I figured with the wind I could run 2:55. So I settled into running 17:30 per 5k, regardless of what other runners were doing. Once I took the lead around halfway, I focused on maintaining my pace and once I got about a 2-minute lead, I stopped worrying about pace. Since it was a loop course, I could see how far ahead I was, so I just focused on maintaining a healthy lead to the finish.” When asked if there were any surprises, he mentioned, “The only surprise was that before the race I set up my fluid bottles for fueling during the race, and then went for my warmup. When I got back I saw the wind had blown my bottles off of the table, several of the bottles broke and emptied out on the ground, and I was left with less than half of the fluids I had planned on taking during the race. Ended up fine though!”

While Khan will be an automatic selection to the 2020 US 50K Team by virtue of winning the National Championship, and Dewald’s qualifying time will be listed for consideration.

In the women’s race, Camille Herron of Alamosa, CO, took the lead from the start and was never challenged. This was an impressive victory coming on the heels of her win at the Black Canyon 100K just two weeks prior. Four athletes behind Herron were at one time or another in the hunt for the coveted second place. The order remained the same up to 40k, with Herron leading, followed by Laura Kline of Syracuse, NY, Trisha Steidl of Seattle, WA, Laura Dorsky of New York, NY, and Helen Huang of Cold Spring Harbor, NY. At 40k there was an exchange in the second and third position with Steidl gaining on Kline and taking over second by barely a minute, extending her lead to just over 2 minutes at the finish line to take first masters in 3:41:29. Kline finished third woman in 3:43:35 and second masters. Fourth position went to Dorsky in 3:48:15 and fifth to Huang in 4:13:40. 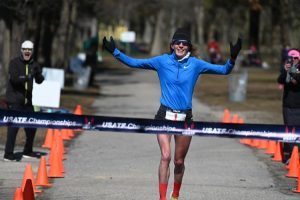 Steidl was running with a very heavy heart after hearing of the passing of longtime friend to all and especially to her, Bill Roe, whom she knew very well. Dedicating the race to Bill’s memory and with thoughts of him filling her time on the course, she definitely felt his spirit and gentle guidance as she dug deep to take second place in memory of Bill.

The race was made possible and the quality outstanding by all the amazing and dedicated volunteers. The Greater Long Island Running Club (GLIRC) is a large running club. Their volunteers not only made for a safe course, but did so willingly and with huge smiles on their faces encouraging all runners. These folks know the effort required to run an event and make sure each runner feels special. Thank you Carl Grossbard, Race Director, Sue Fitzpatrick, executive director of GLIRC and Mike Polansky, president of GLIRC and your tireless volunteers. You and your club have much to be proud of.

The 2021 USATF 50K National Championship will return to Caumsett (or Heckscher) State Park, and will be a qualifying race for the 2021 50K World Championship in Taiwan on October 31, 2021.