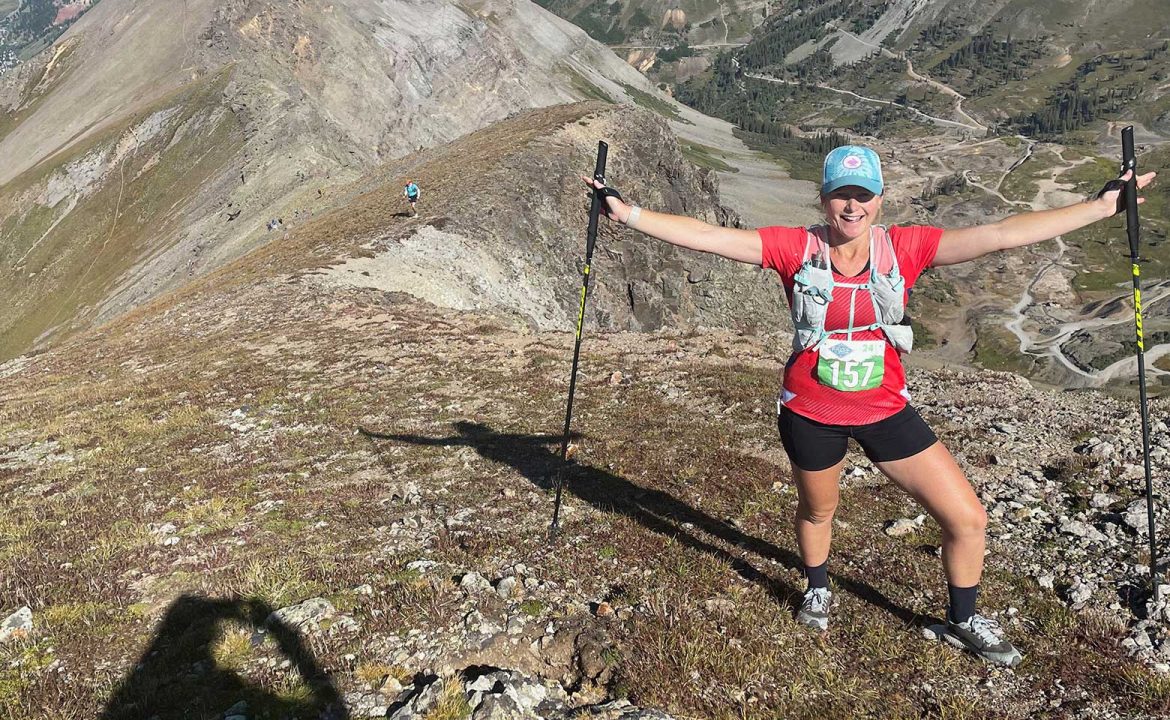 Anna Frost: From Podiums to Parenting

While running the 40-mile Telluride Mountain Run in late August—an extremely tough high-altitude ultra that circumnavigates the town and crosses four mountain passes—I felt a bit glum that I didn’t recognize any of the fresh-faced runners sharing the trail. Years ago, before the sport ballooned in popularity, I could count on knowing several people at any ultra.

Imagine my delight, therefore, when I spotted a blonde woman with legendary status as she approached me on a switchback above tree line.

“Anna, I’m glad to see you!” I called out. It was Anna Frost of New Zealand, 39, tentatively racing again after a challenging two-and-a-half years adjusting to motherhood.

She was in the event’s 24-mile division, which started a half hour after the 40-mile runners, and she had caught up to me. I fell into step behind her as we ascended toward a 13,500-foot peak. We chatted about New Zealand and parenting, and at one point she said of the switchbacks with a hint of fatigue, “They just keep going, don’t they?”

I’ve admired and followed Anna, aka “Frosty,” ever since she won the North Face Endurance Challenge 50 in 2010 and 2011. “She is as naturally beautiful, photogenic and friendly as her country,” I wrote in my blog in 2013. I cheered for her at the Hardrock 100 aid stations in 2015 and 2016, when she ran by on her way to winning, and again at the 2017 Hardrock when she placed fourth.

She also won The Bear 100 in 2014 and has excelled at numerous international events, from vertical Ks to ultras, including setting a course record at the highly competitive Transvulcania 77K in 2014 on La Palma Island.

I suspected that many younger runners around us were clueless about Anna’s achievements, and I wondered if she struggles (as do I) with getting older and being less competitive than in years past. She looked so content on the mountainside, as if just out for a lovely training run. In the final two miles, however, she reignited her kick to prevent being passed and finish in second.

Curious about how she’s doing, and what her relationship to ultrarunning is like in this phase of her life, I called her a few days later.

She took the call in her car, which doubles as an office. She and her husband Ron “Braz” Braselton are living in a trailer, currently parked around the Durango and Silverton areas, as they figure out whether and when to move to New Zealand. Their toddler Skyler makes it difficult to work inside their small living space.

The couple started a business in 2016, trailrunadventures.com, that offers guided trips for runners to some of the global destinations that are Anna’s favorite places to explore and run.

“Things are up in the air,” she says. “COVID has definitely put a pause on any long-term plans. For now, we’re sticking to short-term plans, enjoying where we are in the moment.”

As for training and racing, “Running for me has definitely been about finding the passion again and taking Skyler in the outdoors as much as I can,” she says. “Racing is not my focus. Running in the outdoors, being a good mother and a good role model is my priority and motivation.”

Entering the Telluride Mountain Run—her first race since a 24K in New Zealand’s wintertime conditions in June 2020—”motivated me to actually train and get some consistency back. On race day, I didn’t have a competitive mind. If they had said the race was canceled, I would’ve been, like, ‘That’s OK, I’ve had some great training.’ I’m definitely a different animal in that respect.”

For the past two-plus years as a new mother who nursed and never slept through the night, “I really struggled, not just with running but with life in general.” A C-section left her feeling “completely weak, mentally and physically.”

“I went into this major hole of depression,” she recalls. “The devil of social media shows these pictures of mothers having a baby and getting back to racing after three months, and it puts you in a bigger hole. I was like, ‘Why is this so hard for me? What am I doing wrong?’”

Even two years later, “I feel heavy, I feel tired. Sometimes I just want to go to the trailhead and walk up a mile and then sleep, rather than run.”

But she is moving forward—an important distinction from “coming back.” She says a bodywork specialist told her, “’You have to move forward with your new body, new life, new career, new relationships.’ Once she said that, I could grasp that I’m never getting that body back, and I need to say goodbye to that career” as a professional elite-level competitor. “I have to move forward.”

She adds, “I think we as a society need to say: Enjoy having your baby. You’ll be awesome when you go forward, but you don’t need to rush your body.”

Because she is satisfied and proud of what she accomplished over the past two decades as a runner, she doesn’t feel pressure to do more after she turns 40 this November. “I’m super content with my racing career. I had some amazing wins and good DNFs, big blowups and big injuries, and I’ve learned so much.” She’d rather focus on her work as a coach, and on rebuilding their Trail Run Adventures business once international travel becomes more predictable.

She sounds at peace—but also leaves the door open to racing like she used to—when she concludes, “I’ll sign up for some races as motivation to get out the door and train, and maybe I’ll get some of the lion back rather than being like a kitty cat.”

I really enjoyed reading this article. I love the concept of “moving forward” with our new bodies after having a child. It’s so nice to read about a true legend experiencing the feeling of wanting to take a nap after a mile on the trail. It makes me feel like I’m not alone in being constantly tired as a newer mom and wondering whether I’ll ever race well again. Thank you!

Nice article. I enjoyed reading it!

As a mom with a 2 year-old, this article completely resonates with me. I’m hopeful more articles are published around how moms / parents juggle parenting and running without the notion of “getting our bodies back.”