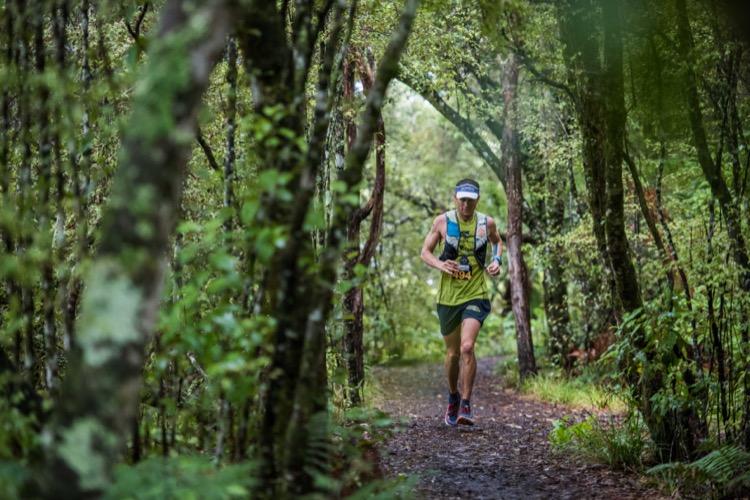 Nestled into the idyllic Bay of Plenty region on New Zealand’s North Island, there is a town that smells like no other. A famous tourist attraction for its geothermal activity, geysers and hot spas, Rotorua greets you with the distinct odor of rotten eggs. Nicknamed Sulphur City, it is also the home of New Zealand’s largest ultramarathon and second race on the Ultra-Trail World Tour calendar – the Tarawera.

On a point-to-point course, the 60, 85 and 100k distances take runners into some of the country’s most stunning scenery, through lush rainforests and along four tranquil lakes, past clear streams and gushing waterfalls. The field has become highly competitive in recent years, and attracted over 400 international runners from 38 countries in February 2016. Since Dylan Bowman’s spectacular win in 2015, the number of competitors from the USA doubled to 45.

This year, however, conditions were the most difficult in the race’s history. Parts of the course, which is usually considered fast, were turned into slippery slides by all-day rain, and more people than ever dropped down to the 60k distance. Elite runners also struggled. “It was a very tough day,” said Colorado’s Jason Schlarb. “There were places where I had to take caution. I think it slowed everybody down a bit.” Schlarb also had a collision with a log in the first 10k, bruising his left quad. “It’s not the most painful race I’ve ever had, but I’ve never had to deal with feeling poorly so early on and carrying through.”

At 103k, the course was also longer than usual. Schlarb still finished a strong sixth in 9:16:48, coming in first among the USA runners. Overall winner Jonas Buud, from Sweden, set a blistering speed on a difficult day, finishing in 8:00:53, while New Zealand’s Fiona Hayvice took out the women’s title at 10:34:26. “The times were really impressive, especially with the extra kilometers from last year’s course,” Schlarb said.

Fellow American runner Michael Wardian finished 15 minutes after Schlarb, in seventh place. “The top field was awesome. Jonas was the guy to beat and none of us did that. He was definitely pushing the pace early on,” Wardian said. Making it to the first aid station in second place, the 41-year-old Virginian hit a low later on and temporarily dropped out of the top 10, desperate for some calories. He finally found some CLIF Bloks on the trail – accidentally lost by New Zealand’s Vajin Armstrong, who finished fifth. “They were really good. I totally ate his leftovers. I’m not very particular to where the calories come from,” Wardian laughed.

Not making it onto the podium this year just gives him motivation to come back next year. “I love this course; I think it gives you a lot of different terrains. It forces you to challenge yourself, running fast on technical trail, getting over the roots and rocks,” Wardian observed. “Most of all, it’s the organization and volunteers and people that make it just insanely cool.”

Aid stations were stocked with fruit, sandwiches, pizza, salty snacks and energy foods. In accessible places, spectators braved the rain for hours to cheer on runners, while dozens of signs along the way featured song lyrics, poetry, uplifting mantras or just “Run, you dirty animals.” Ahead of the Star Wars-themed aid station runners were treated to Luke Skywalker and Darth Vader lookalikes dramatically battling it out with light sabers.

Despite having become a big and international race with 1250 competitors, the Tarawera hasn’t lost the warm and familiar feel of a small race. Organizer Paul Charteris and race director Tim Day waited out until well after midnight to give even the last finishers a big hug and their wood-carved medals.

There were very few female runners from the USA this year – so that has to change. New Zealand is a long way away, but the Tarawera offers more than a race. There are many free and purchasable cultural experiences in the program, from a traditional Maori welcome, scenic boat cruise and special Maori dinner, to a run through a geyser field. February is also within the best travel time for the country. One of the world’s most beautiful one-day hikes, the Tongariro Crossing, through active volcanic landscape and past The Lord of the Rings’ Mount Doom, is just a bus ride away.

Accommodation in Rotorua ranges from basic accommodations to luxury hotels and resorts, and the town has its own airport. It’s also easy to book a four-hour bus ride with InterCity from Auckland for around USD 25. Air New Zealand has direct flights to Auckland from Houston, Los Angeles, San Francisco and Vancouver. And for anyone who was worried – that distinct smell lingers only in the city, and not on the trails.