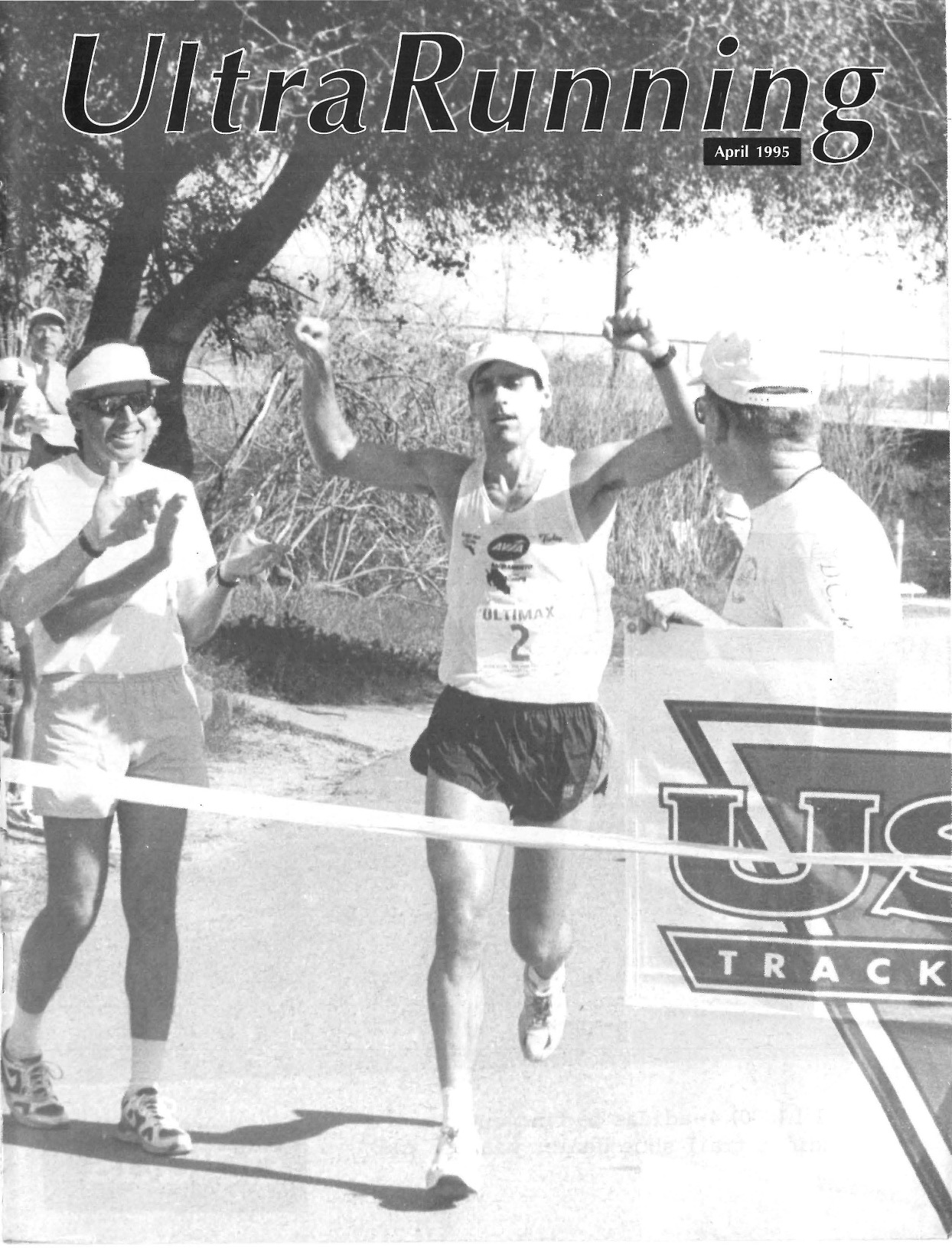 The Bigger They Are…

This article originally appeared in the April 1995 issue of UltraRunning Magazine.

From the house it looked just like snow. For 36 hours, billions of tiny bits of ice had poured from the sky. By the time it finished, everything in sight was covered by a six-inch sheet of ice. No matter that I had listened to the unmistakable sounds of falling ice for a day and half, it looked like snow, dammit.

And it was time to run. So I slipped on my running gear, bundled up snugly against the cold wind, opened the front door quickly, and hopped out. Landing hard on the deceptive white; rather than sinking into a blanket of snow, I shot across the porch as if it were a bobsled run. Arms whirling like propellers, I somehow stayed upright as I zipped across. Then my feel dropped off the edge and broke through the surface, stopping my Bight. Well, stopping my feet anyway. The rest of my body continued only far enough to leave me sprawling face down on the ice.

A smarter person would have gone back inside, once they got to their feet. But I’m not a smarter person, I’m a runner. Slipping, sliding, and wobbling I made my way across the yard to the road.

Traffic had continued through the early stages of the storm, and rough-edged frozen slush along the roadside provided some traction. The center of the road was packed hard and smooth as glass. Nothing was moving but me, so I eased out to the middle of the road as I started to jog. It was hard to get up any speed, slipping more than pushing off with my feet. But by the time I came to the first big downhill I was nearly up to a slow run.

I strode across the lip of the hill onto the downhill slope and ham. I was spread-eagled on my back watching the tree limbs circle in the sky while I turned in lazy 360s down the hill. While I was trying to figure out what had happened, I crunched slowly to a halt on the road shoulder. No smarter than when I started, I clambered to my feet and shook out the cobwebs.

Since I was continuing to slide slowly downhill I took a couple of mincing steps to gain balance and then strode out. My lead foot shot skyward and my back leg bent under me flipping me sideways onto my back where I caught myself with a painful crack on my elbows.

As I got up again I was pretty shaky. However, I was confident I had it figured out. If my feet got in front of my body weight, I would fall on my butt. So, this time, when my feet started to slip, I lunged ahead. Both feet went out the back and I crashed down on my knees before gracefully pitching face forward.

Already having covered about 200 yards in ten minutes I decided that I was at a good turnaround. Then the real fun started. By now I was onto the steep part of the hill and try as I might I could not stop going further down. After a couple more crashes, thankfully shorter falls facing uphill, I conceded the road and stumbled off into the ditch. There, by hanging onto weeds and trees, I managed to struggle back to the top and return to my house.

Many people, in thinking of running, never even consider falling. Yet falling might well be the most popular aspect of the running sports. Consider Jim Ryun; for nearly a decade he was the most dominant middle-distance runner who ever lived.

What is he remembered for? His face first sprawl at the Munich Olympics, of course. Or how about Mary Decker? After setting countless records she is still best remembered for a race that was nipped in the bud by having her foot stepped on. Even more recently Gail Devers collected a couple of golds in the Olympics, but garnered the majority of her press by finishing the 100-meter hurdles headfirst, with the last hurdle still tangled between her legs. When you think about it, the artful fall might be considered the “Slam Dunk” of running sports.

This is great news for ultrarunning. No one falls like tired ultrarunners, and there is nowhere better to fall than in a trail run. We just have to move the cameras. Instead of pictures of slow-moving wind-suckers grinding up a big hill (something you must experience to appreciate), we need them to capture someone coming rapidly downhill in a wild tangle of arms and legs and a cloud of dust.

Meanwhile, it is up to us runners to perfect the running fall. And with my natural gift of gracclessness, who better to instruct those less talented in the Art of Crashing.

There are four basic falls that an ultrarunner needs to master: face-first, flat-on-your ass, over-the-edge, and step-in-a-holc.

• Face-first is the most common and most easily achieved. After enough hours of running, with your feet now clearing the ground by only a millimeter or two, almost any rock, root, or other obstruction will serve to stop your feet. Your head, however, will continue travelling forward, making a perfect arc from above where your feet stopped to the ground. Tradition dictates that you throw out both hands to catch yourself and cry out with your favorite expletive.

There are those who recommend rolling out of a face-first fall, but the hands-out technique will guarantee embedding flecks of asphalt, gravel, or at least sticks and dirt in your palms, if not breaking a wrist. Style points won’t be awarded unless you emerge with tangible injuries. Runners seeking an extra degree of difficulty may add their own personalized touches, such as banging their head into a tree trunk, or cracking their knee on a rock. These will add a modicum of class to even the simplest headlong plunge. (The most noteworthy face-first fall I ever witnessed was achieved by snagging a toe on a root as the runner was approaching a switchback. The runner vanished over the end of the trail and ended up dangling upside sown in the branches of a small tree. It was, I must say, a work of art.)

• If face-first is the easiest, flat-on-your-ass is the most difficult maneuver for a runner to achieve. With your body travelling as fast as you can make it move, some outside assistance is usually needed in order to get those feet out front.

Ice, as we all know, was invented for this purpose. Mud, algae, and wet rocks or pavement can all do the job if we achieve sufficient inattention. Most ultrarunners are, fortunately, gifted at inattention. That’s how they get lost.

Once the feet arc up, the important things to remember are to exclaim “Oh!” followed by your favorite expletive, and throw your hands or elbows out behind you to bear the brunt of the fall.

It is best to shoot both feet out front, because the single foot technique often results in a painful twisting of the remaining leg. This can inflict traumatic stretching of the muscles, tendons, and ligaments in that leg. In addition, the two-foot method places you flat on your butt, right where your feet left the ground. A one-footer might end up tumbling off in almost any direction.

• Over-the-edgers are simple falls, although often quite dramatic and yielding very high scores. But not just anyone can go “over the edge.” It takes a determined runner to locate, and hit just right, the loose rock, crumbling overhang, or hidden crevasse that will send them tumbling into the unknown.

The proper cry as you disappear is an “aaah” sound. Expletives should be reserved for when you bounce off trees and rocks. After you complete the free-fall and roll-and-bouncc portions of the exercise, you are supposed to spread eagle and slide to a stop among an avalanche of dirt, rocks, leaves, and sticks. While an over-the-edge is difficult to achieve, it is a real crowd pleaser.

• The step-in-a-hole fall is one of the least used falls in running, perhaps because of the high injury risk involved, but more likely because it requires a certain knack for putting your feet in the wrong places.

Not just any hole will do. A shallow hole is just a variation on the old face-first approach. The proper hole must be deep enough to go at least mid-shin, and small enough for the foot to lodge in the bottom. Depending on what part of your leg hits the front of the hole, either the knee or hip joint will bear the full force of stopping your forward motion. Step-in-a-hole may lack the drama of an over-the-edge, and it may not have the hilarity of face-first or flat-on-your-ass. But it sure does hurt. What step-in-a-holc lacks in visual effects is more than compensated for by the genuine cries of pain.

All in all, falling is underrated and unappreciated by runners, especially those with a natural aptitude. If ultrarunning is going to become a big-time sport, wc’vc got to give the public what it wants. Looking at the sports on TV now, it is obvious that flying bodies and collisions could make us all famous.