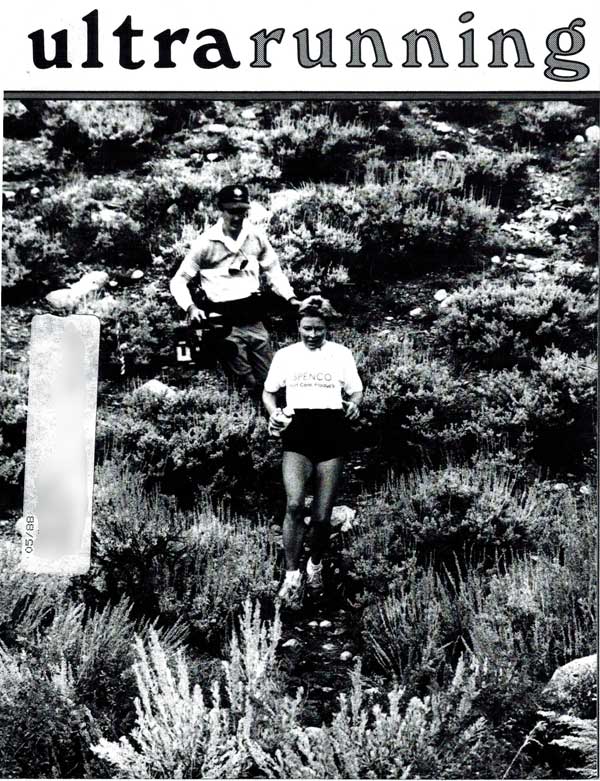 Running Across the Sky

This article originally appeared in the October 1987 issue of UltraRunning Magazine.

Colorado is an oasis of spectacular natural beauty in the middle of thousands of miles of high desert to the west and flat plains to the east. Right at the heart of this beauty is Leadville, with its high alpine terrain surrounded by lower slopes of huge aspen groves mixed with a variety of conifers.

Our contingent of the “Sierra Express” running club of the Auburn, California, area was looking forward not only to the 100mile race itself, but to the cooler weather Leadville offers, in contrast to the hot, dry climate of California during the summer.

There is a sequence of events my wife, Lisa, and I follow upon arrival in Leadville:

First: Notice the elevation. There is no oxygen up there! One tends to forget that Leadville is above 10,000 feet until you drive from Denver, unbuckle your seat belt, open the door, and stand up. Not only has your breathing rate accelerated, but your resting heat rate has crept up by 10920 beats per minute.

Second: Check the weather. Even though Denver has been hitting record highs in the mid—90s, Leadville, in the mountains to the west, was cool in the 70s with partly cloudy sldes and the usual thunderstorms in the late afternoon. If only we could run today, I thought…perhaps the good weather will hold for three more days despite the predictions of a storm for Saturday…after all, Leadville has extremely unpredictable patterns…

Third: Drive to race director Merilee O’Neal’s office and check out the buckles. lf you haven’t seen the Leadville 25 Hour silver and gold buckle or are not a Colorado cowboy, you are deﬁnitely in for a treat. Our Sierra Express contingent appropriately nicknamed it “La Plata Grande” last year. You can fry eggs with this baby, serve dinner on it, or perhaps even wear it and have people look down at your belt area and say, “My, that’s big!” Actually, my favorite pastime is setting off metal detectors at airports and then asking, “Oh, you mean this?” This buckle is big fun.

Skip Hamilton (left) and Steve Warshawer chatting in the medical tent after the race.

Fourth: Settling in. Next, we unpack, round up all our club buddies, get nervous, and compare our plans. For all of us, this is a great way to go back to Leadville. We’ll get a group to train together during the summer and all go back to Leadville as a big extended family.

We are all very excited. Pat Whyte is out for revenge this year. He ran last year, but was sick with some intestinal bug before ﬁnally throwing in the TP at about 70 miles. Sandy, his wife, although seven months pregnant, has come back to crew and hopefully see him finish. Eric Evers is taking his first vacation outside California to do Leadville and has driven here with his pacer, Stan Wegner, in a vintage pickup. Beth Matteson and her loyal but loquacious dog, Chrissy, have been back in Leadville for six weeks just to train for her first 100-miler. Chrissy has lost a lot of weight, but not her voice. Beth is ready to go and was very happy to see familiar faces again. Bill Finkbeiner, Beth’s boyfriend, is back in Leadville after ﬁnishing fourth at Western States. This year Bill is going for his third 25-hour buckle.

Fifth: We take a short run around Turquoise Lake to again confirm that there is no air in Leadville, and to find out that there is at least one sore tendon somewhere…a nice twist of the ankle is usually appropriate to serve as the minor pre-race injury going into the race.

Sixth: Drive into Aspen or Vail to see how “real“ people take a vacation. We usually choose Aspen and wander around shops to forget the race for one day. Lisa and I both overeat and by now notice that we have that dreaded onset of what doctors call HAIF (high altitude induced flatulence). We drive back to Leadville with the windows down and the cool mountain air blowing through our hair.

Time for the last-minute instructions from the two people responsible for making the race happen – Ken Chlouber, race originator and co-director, and Merilee O’Neal, race director.

Seventh: Pre—race check—in and briefing. The temperature has now dipped into the high 405 as a storm moves in, but everyone is at the weigh—in with only shorts, singlet, and shoes. Tourists in Leadville now know that ultrarunners can behave oddly at times. Eric has won the pulse contest in our group with a resting rate of 42.

At the pre—race meeting, Ken Chlouber gives out his annual “.lack—Ass of the Year” award ( a tronhv with the rear third of a mule) to a runner from the previous year who screws up. This year’s award went to a guy who lives in Denver and, even though he knows the dynamic climate of Leadville, ended up on Hope Pass with only shorts and a singlet. Ken suggested that they just bury him on the spot for stupidity, but the race management kindly helicoptered him out and he recovered from his case of hypotherrnia. The doctors warn us to prepare for sudden cold just as the doctors at Western States warn us about the heat. The NBC film crew were then introduced along with expert commentator Frank Shorter to give us words of admiration and inspiration. Surprisingly, the pasta dinner was extraordinary even though they had to make industrialsized portions to feed the masses.

Naturally, a heavy storm moved in the night before the race, with thunder, lightning, and the works. Most of us didn’t sleep well.

Eighth: The race. The 4 AM start was dry, but within two miles it started raining; the rain stayed with us off and on throughout the race. Polypropylene is a miracle fabric for keeping warm, but above the 11,000 foot level it was windy and cold and windbreakers or Hefty garbage bags worked well. The elevation became quite noticeable on the uphills and the mud was wild for sloshing down the other side of the major climbs. At the Halfmoon aid station, I saw Jim Howard who was suffering from severe stomach problems and about three miles later, Jim King is walking down the road with the nausea blues. Frances Howard was driving back into town to fulfill Howard’s request for a “very greasy hamburger” and King’s request for a “greasy grilled cheese sandwich.” Breakfasts of Champions. At 85 miles, my 20th place finish at WS this year catches up with me. Although there are only ﬁve ﬂat miles around Turquoise Lake, this death march seemed endless. Through an unofficial poll I conducted after the race, I have detemiined that there is a time warp that exists on this side of the lake late at night.

By 3:00 AM, everyone in our Sierra Express had finished in less than 23 hours except Beth, who we knew was still out on the course. After three hours of sleep, we got up and set out to find her. We knew that if she wasn’t at the boat ramp at 92 miles, she wouldn’t have time to make it in under 30 hours. About a mile from the boat ramp we found Beth with her entire crew, including her dog. Even though she looked like a sleepwalking, wet Gabriele Anderson, we chanted the universal ultrarunnin g lie, “Looking great, Beth! Not far to go!” We kept thinking about all the time, effort, and energy she had put in by coming back to Leadville to live and train for those six weeks speciﬁcally for this run. Beth still had to run a minimum of an 18 min/mile pace at elevation, uphill, into Leadville to finish within 30 hours. Finally, one mile from the ﬁnish, the eight of us werejoined by the NBC crew as they filmed Beth’s “run” to the finish in 29:5l. There wasn‘t a dry eye to be found.

Looking at the results we noticed that. in an inspirational show of character, the elite runners Jim King and Jim Howard managed to both finish after beating severe bouts of nausea, cramps, and vomiting.

For the Sierra Express it was certainly a great race and a great adventure despite the rain. What do “real” people lcnow about how to take a vacation anyway?

As an aside, I would like to add that at the Denver airport the United Airlines counterperson happened to notice our buckles. Due to the great local media coverage of the event, and our rather retarded gait, she knew what we had been through. She was impressed enough to bump us up to first class leg room and service for our retum trip home.

My deepest thanks, appreciation, and admiradon goes to the wonderful people at Leadville for the excellence they achieve on this lOO~mile run. Historically, Leadville has been known for its famous ladies like Baby Doe, and the unsinkable Molly Brown; it’s nice to know that the 1980s have added another to that list, race director Merilee O’Neal.