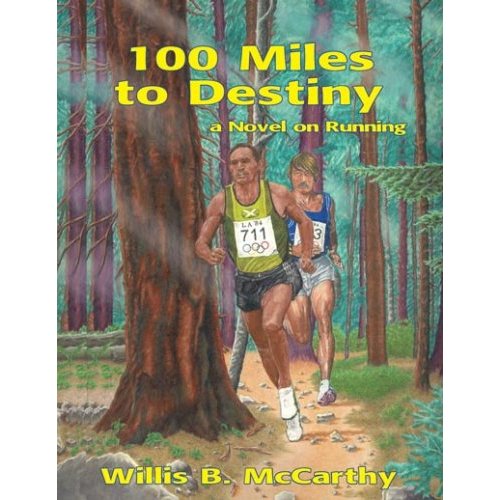 I imagine that many of us enjoyed watching the marathon and even some of the track events at the just-concluded Olympic Games in Beijing. After all, we are all runners, and most of us can relate to the preparation and training it takes to get to a big event, and it is great to see the competitive spirit of all of the athletes. As you were watching, did you find yourself wondering what it would be like if an ultramarathon were to be contested as an Olympic event?

In his novel, 100 Miles to Destiny, that is exactly what author and ultrarunner Willis B. McCarthy has proposed. The story is told as if it did in fact take place at the 1984 Olympic Games in Los Angeles. Of course, being held in California, it would only make sense to choose the course from Squaw Valley to Auburn; that’s right, the Western States 100 mile course. With chapter titles such as Duncan Canyon, Robinson Flat, Michigan Bluff, and Placer High School, the book is sure to bring back memories for anyone who has already run Western States. For those who haven’t run there, it is a good introduction to the course. And for those who have never run an ultramarathon at all, the book gives an insight into all that goes on in a 100-mile event – the preparation, race tactics, nutritional strategies, even aid-station protocol. If you have ever tried to describe to someone who hasn’t run an ultra just exactly what it all is about, this book might help to clarify some of what actually goes on out on the trail, as when the television reporter covering the event asks the race director what happens to a runner who arrives at 4:31 at a checkpoint with a 4:30 cutoff time, he answers (as some of us know all too well) “the cut-off times are strictly enforced.”

The book is a novel, however, not just a factual description of the Western States 100 run and as such, McCarthy develops an interesting story line based on the personalities and nationalities of the competitors. In a postscript to the book, McCarthy tells how he has spent much of his life travelling abroad, often using running as an opportunity to meet the people of the many different cultures he has visited. Based on these interactions, he builds the story around a diverse group of competitors. There is the American, a favorite to win (having of course won the Western States 100 run previously), as well as a Russian, a German, an Irishman and many others. McCarthy describes the background of each competitor, his family, what motivates him, and how he arrived at this Olympic event. Just as in a “real” 100-mile race, there are unpredictable events, runners who are forced to withdraw, and lead changes throughout the race. And in case anyone should get bored with just a plain description of a 100-miler, there is even an “x-rated” scene, where our local favorite catches his wife cheating on him, thus finding a motivation to immerse himself in his training.

With some predictability, the American and the Russian are battling for the lead at 75 miles, followed closely by the Mexican, Japanese, Israeli and Italian runners. I won’t give away who actually wins the race, for that you’ll have to read the book.