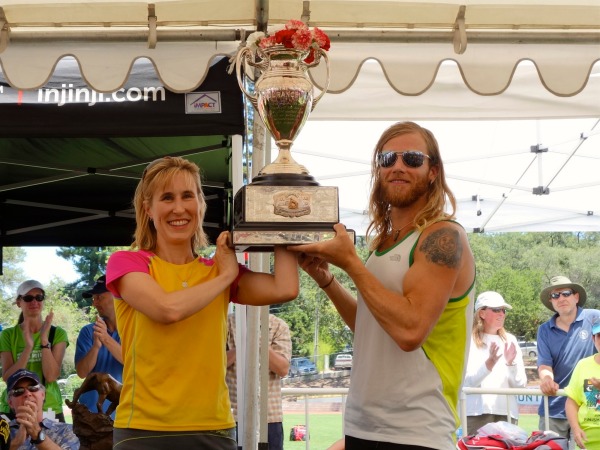 Western States Champion Pam Smith had a race for the ages on one of the hottest and most challenging days in the 40 year history of the oldest and most prestigious 100 mile race in the world. Not surprisingly she is a woman with unique character and her own approach to training, nutrition, and life… Learn more about her race and interesting story in the following interview with us.

Ultrarunning Magazine: In looking at your race you made it seem easy. After Duncan Canyon you left the group chasing leader Joelle Vaught and started reeling her in, passing her decisively and putting 4 minutes on her between Miller’s Defeat and Dusty Corners. Then you never looked back and expanded your gap to 17 minutes through the scorching canyons and into Michigan Bluff. After that it was more of the same, expanding your lead in virtually every section thereafter, culminating in a victory at Foresthill with former 3 time champion and perennial top 5 woman Nikki Kimball a distant 44 minutes back.
How did you do it?

Pam: Well, early on running in that pack was great but the pace just felt a little too conservative for me after Duncan Canyon. My strength is climbing, and the heat wasn’t really affecting at that point, so on the climb into Robinson I decided to push it a little more. I was feeling strong up and over Little Bald mountain but I wasn’t really trying to chase Joelle down; I was just running my own race. So I was kind of surprised that I had made up 6 minutes on Joelle and got into the Miller’s Defeat aid station just behind her. Just past the aid station I took the lead, but right after that, I had my first “ultra barf.” My stomach had been riding kind of heavy after chugging an Ensure at Robinson flat, but vomiting kind of took me by surprise. The thing is, my legs were feeling good and once my stomach was empty there was nothing holding me back and I was able to keep up a strong pace the rest of the way to Dusty Corners, leading Western States. The crowd was probably pretty surprised to see me in the lead, but my husband was really freaked out to see me in the lead at that point. He was so afraid that I had over-exerted myself and that I was going to blow up later.

Ultrarunning Magazine: How did you handle the heat?

Pam: I had a multi-pronged approach to battling the heat. Going into the race, I did a lot of sauna “training” (ie. reading People Magazine in the sauna). For the race, I decided to use all liquid nutrition, to keep things processing through my stomach as much as possible and to make sure I was taking in the maximum amount of liquids. I pre-froze all of my bottles and then wore them in a vest, so that my nutrition also acted as a cooling aid. I carried an extra bottle just for dousing and made sure to stay wet all day. Sometimes that meant splashing in just a couple of inches of water and mud. I also eschewed all of my fancy tech shirts for a cut up Goodwill cotton T-shirt. Cotton holds more water, doesn’t wick moisture, sticks more to the body, and has more air flow as compared to tech fabrics. Usually those are bad things, but not in 100 degree plus weather. I wore a big bandana full of ice across my chest and neck all day – I called it my green goiter. And I put ice in my hat, my bra, my pack, my pants – anywhere you could put ice – at every aid station. I definitely wouldn’t win any fashion awards, but it was pretty effective dealing with the heat.

Ultrarunning Magazine: After you took the lead at mile 38 in retrospect now we can see that the race was over, how did you take command like that and bury the elite pack of women behind you?

Pam: I wasn’t really trying to “take command” or “bury the elite pack”, but I was focused on running my best possible race. Mostly that meant playing to my strengths, which is uphills. I felt really good all through the canyons and I used the climbs to Devil’s Thumb and Michigan Bluff to my advantage. After Michigan Bluff, I got updates on the other runners at most aid stations so I could track that. Even though my effort was manageable, my lead was growing. Really, it was just a magical race and I was able to run strong and consistent all day.

Ultrarunning Magazine: What else do you think was at work out there?

Pam: Well, last year I had a disastrous Western States – from a racing point of view, it wasn’t my day but I still struggled on to Auburn and got there in 29 hours. It was disappointing, but I think it made me mentally tougher and I was really glad I finished. It also made me appreciate and respect the course more, and even hungrier to do better this year. But I will say, my respect for the runners who finish on Sunday mornings under a blazing sun is tremendous. I would definitely tell you that running a 100 in under 20 hours is easier than finishing in close to 30!

Ultrarunning Magazine: At what point did you think the win was in the bag?

Pam: Not until the final turn on the track! After the river it seemed pretty likely, but you never want to get too cocky in a 100 mile race. Anything can happen, and that’s part of what makes them so challenging and fun.

Ultrarunning Magazine: Nutrition is becoming such a big topic for ultra runners, and we hear about something new every month and there seem to be as many successful approaches as there are ultra runners now. What is your approach to nutrition?

Pam: This year I made some radical changes to my diet. After 17 years as a vegetarian, I started eating meat again, but no more than four ounces at any one meal. I tried Paleo, but it just didn’t work for me. Mostly, I just felt “bonky” in my workouts, but also I like carbs! I just couldn’t give them up completely. So I do something called “carb back loading.” It is more prevalent with weight lifters and not really practiced amongst runners. Basically, it is like eating Paleo for breakfast and dinner, but then eating lots of carbs at the back end of the day (hence the name) to make sure your muscles are well fueled and able to perform for the next morning’s run.

Ultrarunning Magazine: What actual foods are we talking about?

Pam: Eggs, lots of eggs – we have 9 chickens so we have a steady flow of fresh organic eggs. My single favorite food is avocados, I can’t get enough of them. I also use oils – lots of olive oil and coconut oil. I’m still leery of eating a lot of saturated fats, so I don’t do the heavy cream, excessive bacon, or lots of animal fats that you sometimes see in the Paleo diets. My carbs at dinner time tend to be white rice, potatoes, or polenta – easily digestible real food. And I avoid wheat to the extent I can. My weakness is probably sugar – I like my desserts after dinner.

Pam: We have a fire pit in our back yard and my kids love to make s’mores. I try to limit myself to just a bit of the chocolate, but that doesn’t always happen. We also have one of those self service frozen yogurt stores near our house, which can be a little too tempting at times.

Ultrarunning Magazine: What do you do when you aren’t training and racing ultras?

Pam: I have two kids, Megan and Liam, that keep me pretty busy. I have a full time job as a pathologist in Salem and I love to garden. I grow almost all of our veggies in the summer time.

Pam: I am planning to take it pretty easy this summer in terms of racing and just enjoy some down time with my family while the kids are out of school. I do have several pacing gigs to keep me motivated and to give me an opportunity to have some great runs without the pressure of racing. At the end of the summer, I’ll be focusing on the 100km World Championships which are in South Africa at the end of October.

Ultrarunning Magazine: What advice would you give others – both frontrunners and back of the packers – with 100 milers on their race calendar this year?

Pam: Embrace the experience, learn from it and enjoy it, whatever it is on that given day. Doing your best to finish with whatever you’ve got is what this is all about.