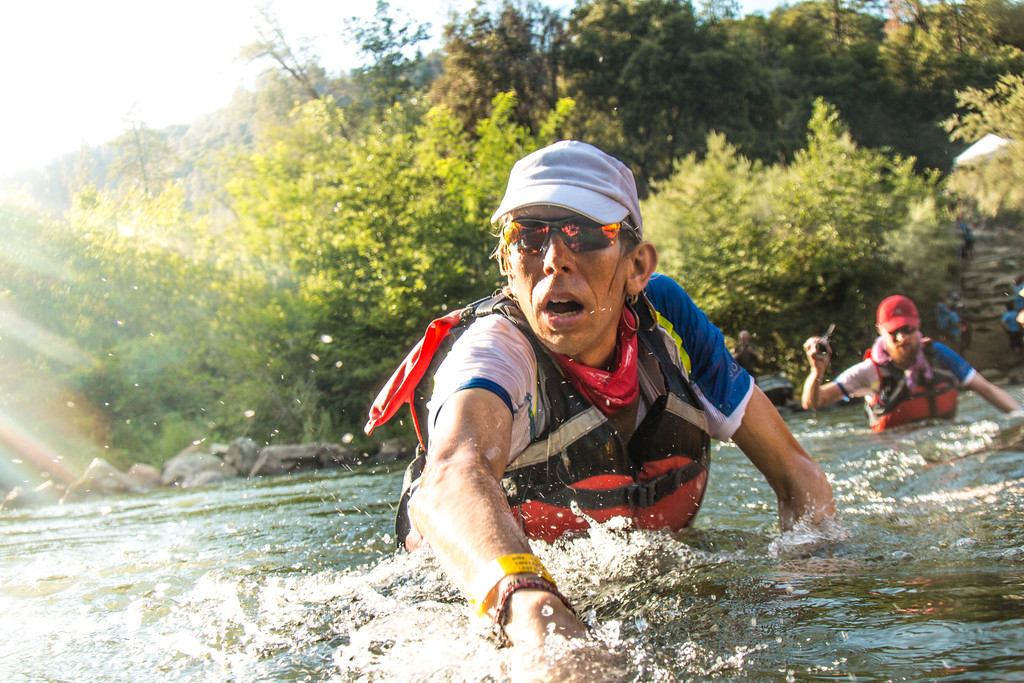 What’s So Different About Western States

More than anything, what separates Western States from most other 100-milers is the pre-race buzz. Hype. There’s lots of it. The Squaw Valley village is full of runners, pacers, crew, spectators, volunteers, media, sponsors, and various other hangers on. The energy level – and entrant’s anxiety levels – increases as race week goes on. By Friday, it’s so electric you can feel it.

Some runners feed off the buzz, it gets them pumped up. Other runners find it all a bit too stressful. For them, it’s hard enough to contemplate running 100 miles – especially if you’ve waited several years to get in – without the extra anxiety created by all the commotion and well-wishers. By now, you know which of these camps you are in. If the former, you’re in your element, relish it. If the latter, try to chill out as much as possible. I am definitely in the latter group, I tell myself to just “Zen out” – a thousand years from now, none of this will have mattered.

You’re probably not going to sleep well the night before the race, but hey, that’s nothing new. It doesn’t help that you have to get up at 3 a.m.

If you think the energy level was high on Friday, the hour before the start early Saturday morning beats it by an order of magnitude. Finally, almost mercifully, it’s 5 a.m. and the gun goes off. You’re underway!

The first four miles is all climbing up to Emigrant Gap. At the top the trail narrows to single track. You’ll end up in a conga line, with no obvious places to pass for the next few miles. UTMB veterans will feel right at home, but if you are used to running smaller events, you’ll find it frustrating. Relax, there’s still 96 miles to go. 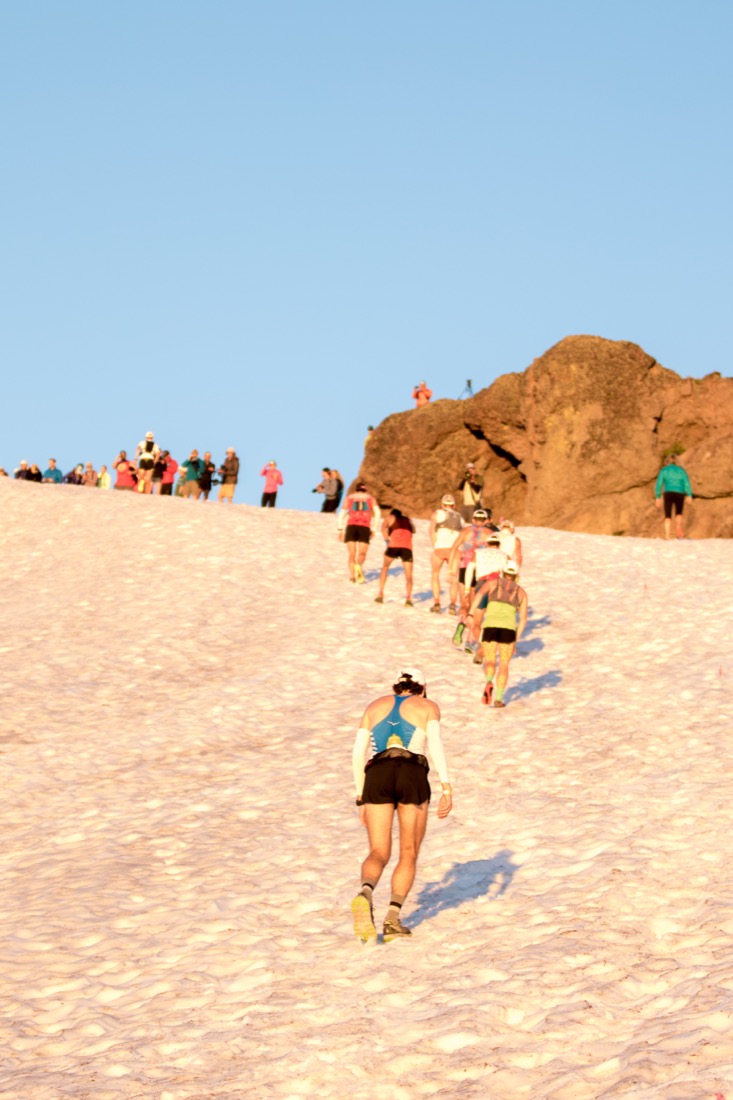 The first 30 miles are a lot like other mountain runs. Rough trails, great alpine scenery, cool air. (Some years there can be several miles of snow to traverse, but not this year.) After the first three hours or so, the conga line stretches out and you have plenty of space to run. Six or seven hours in, after being in the solitude of wilderness, you come into the Robinson Flat aid station. It’s mayhem. More than a thousand people are there; if you have crew here, it might be hard to find them. It’s deafening, confusing, a jar to the senses.

Soon after leaving Robinson Flat, you will begin what is likely the longest downhill you have ever run. Through Miller’s Defeat, Dusty Corners, and Last Chance aid stations all the way to the Swinging Bridge at the bottom of Deadwood Canyon, it’s pretty much all downhill for the next 15 miles, losing about 4000 feet in elevation.

Somewhere during that downhill, maybe even before you get to the downhill, it will get hot. Heat is the thing that makes Western States difficult. The heat is variable from year to year but can be over 100ºF some years, though something like 90ºF is more normal. It’s the combination of the heat and the fact that most runners are traveling on the hardest part of the course during the afternoon hours that can be debilitating. Immediately following the long descent is the very steep climb from the Swinging Bridge to Devil’s Thumb, a total of 1600 feet in 1.5 miles. After a precipitous drop into El Dorado Canyon, a few miles later there is another 1600-foot climb, this time in 3 miles, up to Michigan Bluff. Most of the field will do both of these in the heat of the afternoon.

If you survive the canyons, the final 38 miles of the course is surprisingly gentle. This is highly unusual too: having a lot of pretty easy terrain after the first 100km has beaten you to a pulp. Preserving your energy level, not to mention your quads, so that you can really run at the end is an art form. A few have mastered it, but most are reduced to a stiff-legged survival shuffle just about the time the course gets relatively runnable.

At mile 78, you cross the Middle Fork of the American River at Rucky Chucky. You wade through waist deep water with the aid of a belay and several volunteers in wetsuits to assist you. The entire area is lit with klieg lights like a scene out of Apocalypse Now.

After crossing the river and a 700-foot climb up to Green Gate aid station, there are many miles of gentle terrain on trails that follow a contour on the ridges, what my friend Tony Rossmann cleverly described as “horizontal canyons”.

Eventually, finally, you enter the city of Auburn, with a mile-and-a-half on city streets before entering LeFebvre Stadium at Placer High School. The final 300 meters are on the high school track – a victory lap to be sure! – where you will have the exquisite pleasure of finishing and the perhaps dubious pleasure of hearing my voice announcing your arrival.

John, thanks for setting the scene for what will be another memorable Western States event. Keep the hype high, it’s fuel to run free, run far!

This article is a fine example of how WS officially starts well before the race gun fires.

And of course, ends with a familiar voice, “and now entering the track…..”

Great piece TJ! It made me feel as if I were running the route again — and made me want to return. I’m so grateful I got to go the distance in 2016. WS100 lives up to the hype. Kudos to you and all board members who steward this iconic event–which is really an institution–and manage the stresses and demands on it. Have another magical morning in the announcer’s booth, and then I hope to see you in July here in CO!

I started volunteering at Western States in 1994. I have volunteered at a number of races and run many others, but there is nothing like the WS 100. The runners, the course, the history, that guy with the deep voice at the finish line in the middle of the night, the golden hour on Sunday morning. I would not miss it.

Neither John’s piece nor the comments help ease the pain for all of us perennial lottery wannabees. Here’s to better chances — and hopefully not my “last chance” — for 2019. #seeyouinsquawsomeday

This is Pat Smythe-Conill. I’m the first female to finish (and win!) the WSER! I’ve loved being “found,” and having the chance to re-experience this ultra, again. So much has changed since June 24, 1978; my age, for sure, but also the course, itself, which has gone through so many morphs over these past 40 years. Hard to believe that it’s been that long! in 1978, there was no waiting list to be able to run the course; there were only 68 of us at the starting line that year, and rarely did you see anyone on the course once the race began. it was the adventure of my life, and I salute all who have run it, since.
i especially want to voice my admiration for the WSER Board and all the volunteers who have worked so tirelessly to keep it going, to make it happen year after year, and who put out their utmost efforts to make it safe for all runners and certainly, to make it a once-in-a-lifetime experience.