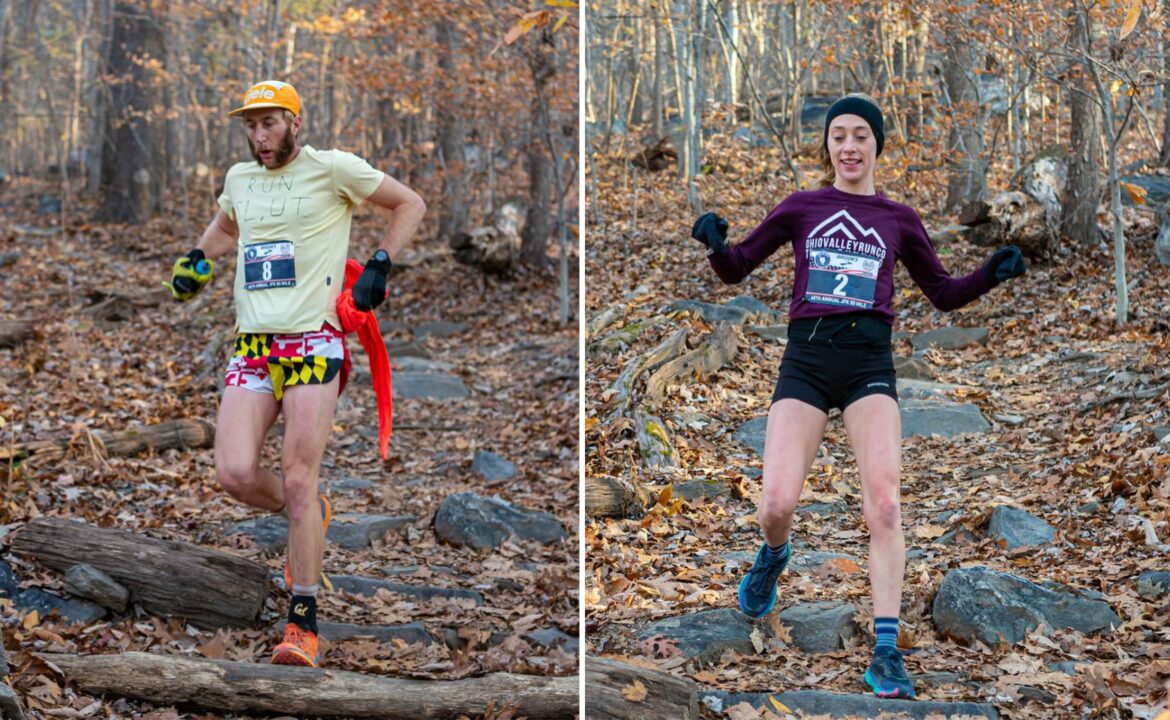 2022 JFK winners, Garrett Corcoran and Sarah Biehl, on the Appalachian Trail at the bottom of Weverton Cliffs around 15.4 miles into the race. Photos: Paul Encarnación

Operating sustainably has been central to OrthoLite’s DNA since its founding 25 years ago, beginning with footwear insoles containing recycled rubber. As the world’s leading supplier of open-cell foam technologies for more than 450 leading footwear brands worldwide, across all categories – outdoor, athletic, running, comfort, golf, lifestyle, and fashion – OrthoLite solutions are utilized in more than 500+ million pairs of shoes every year. Learn more at OrthoLite.com.

As the world of ultrarunning continues to expand exponentially around the world, the technology and choices of footwear for athletes follows a fairly parallel road. Simply put, there are a plethora of options depending on the length of event you’re training for, the surfaces it’s primarily run on, the technicality of the terrain and more.

Arguably, there’s no more dynamic of an event to test shoe choices than at North America’s oldest ultramarathon, the 60-year-old JFK 50 Mile, held just outside the nation’s capital in western Maryland each November.

The historic JFK course is a unique beast. The course starts and ends on pavement, has a roughly 12-mile section of technical Appalachian Trail (AT) and a 26-mile portion of fine crushed gravel, which can all be made even more complicated by unpredictable fall weather.

Physiology and biomechanics researcher at the University of Michigan, ultrarunner, UltraRunning Magazine contributor, Team USA physiologist and former top-five finisher at JFK, Dr. Geoff Burns, has a ton of experience when it comes to ever-evolving shoe technology.

When he first ran the race two years ago, Burns was faced with the decision of what has become known as the shoe switch after exiting the AT around mile 15 of the race. “I worked backwards from the C&O Canal and road sections, prioritizing that footwear on those bits. With the modern advancements in road running shoes, the gains to be had in the correct shoe for the C&O and road sections are so substantial,” Burns said in a recent interview.

Knowing that a shoe with a carbon fiber plate would be more efficient in the final 35 miles of the race, the question became whether or not to just wear that shoe during the trail section during the first third of the race.

“This actually became a really difficult decision, not because of the question of balancing out the time it would take to change the shoe, but because I didn’t know if those super shoes would have a similar benefit on the trail or if their characteristics would actually be detrimental,” Burns elaborated. “I could play out a lot of different scenarios where they could be advantageous over trail shoes on some trails, but detrimental on others. That foam is pretty incredible, not just for its energy return, but also for its compliance, which can buffer some of the uneven substrate on the trail a bit.”

However, because that foam is so resilient and the stack is so high, there was a risk of being incredibly unstable. “The plate could similarly go both ways; either dissipating point perturbations (like a rock plate in trail shoes) and providing some degree of stability, or forcing the foot on a given trajectory and not allowing the mobility and variance in footstrike that some trail surfaces demand,” Burns explained. The traction on most of the top performance road shoes with plates are not ideal for trails laden with rocks that could potentially be slippery from precipitation and other adverse conditions.

Still, Burns went about the prudent process of testing out some shoe choices on trails reminiscent of the AT trail near his home in Ann Arbor, Michigan. “I found that I was really liking the super shoes on the trails,” Burns admitted after some initial testing in the fall of 2020. “Their traction didn’t seem to be an issue, the stability wasn’t a problem, and the compliance in the foam felt great on the trail. So, I figured that the shoes would, at worst, be about even with a trail shoe on the AT, the benefits on some sections balancing some possible costs on others and at best, maybe slightly superior to a trail shoe.”

Going into race day on Saturday, November 21, 2020, Burns was content with his decision; to start and finish in the same pair of super road shoes at the 58th annual JFK 50.

“I was completely wrong,” Burns admitted. “They were so awful on the AT. The stability was a huge issue, as the AT had long sections with extremely large rocks covering most of the trails, and the inability to modulate the foot in a nuanced way due to the high-stack-plated architecture was incredibly detrimental. Not only was it slower going, but it was extremely taxing on my legs.”

Additionally, the lack of traction on the rocks was horrible. Burns said, “I think I cost myself not only many minutes on that section, but also compromised my ability to run fast on the C&O and road, as it really fatigued my legs with all of the extra work my legs were having to do to stay upright and controlled.”

At mile 15, Burns felt when he got off the trail at the Weverton Cliffs, like he had already run an ultra but still had 35 miles to go. “My legs were wrecked. Humorously, I even ripped a big chunk of that foam on a rock. I don’t think it affected the shoe’s performance for the rest of the race, but that illustrates the incongruity of the shoe-surface interaction.”

Coincidentally, at this year’s JFK for the first time since the advent of super shoes, the men’s winner Garrett Corcoran did not change shoes. He wore a new type of hybrid shoe that has surfaced in the ultrarunning market which boasts modest trail lugs for grip and, to address the issue Burns faced when wearing road shoes on the AT, a plate to provide better propulsion on the gravel and road sections that make up the majority of the course.

Adversely, the remainder of the top 10 on the men’s side did make the shoe swap. The women’s winner who finished 11th overall, Sarah Biehl, established a new course record by 6 minutes, and also swapped shoes. It’s safe to say the previous course record holder from 2012, ultrarunning legend Ellie Greenwood (whether she switched shoes or not), didn’t have the advantage of today’s plate technology.

And while the aforementioned examples show shoe choice can make a difference in the outcome, it’s clear that it still boils down to the user and their experience as a runner, comfort and familiarity on different types of terrain and ultimately, what they’re looking to achieve on race day.