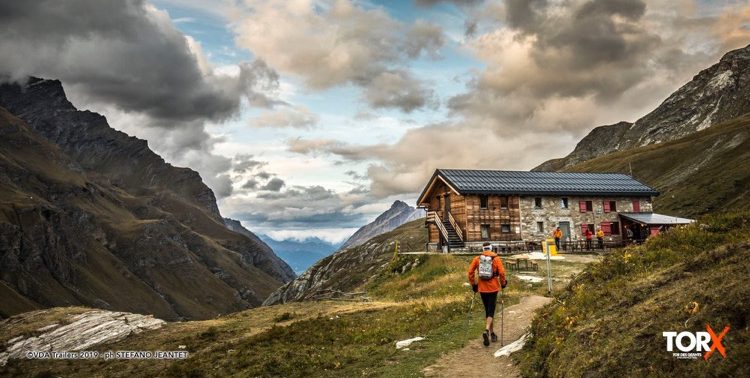 One week. I think I just ran for one week. Face down in a pile of gelato, my body seemingly confirmed what my mind was having some difficulty understanding. My quads were swollen from the damage of constant steep descending, and my legs had difficulty just standing there. Perhaps they had become accustomed to constant motion over the last 160 hours, or maybe they realized there was no more work to be done. At this point, the aches and pains were casual observations imbedded in the experience without consequence or meaning. But my hunger wanted no part of this existential crap and snapped me back from these thoughts, challenging me to shovel in more post-race gelato. My daughter stared at me dumbfounded, although it had nothing to do with the race, just the impossibly fast disappearance of the gallon of gelato that she had hoped to share. Good thing round two was on the way. 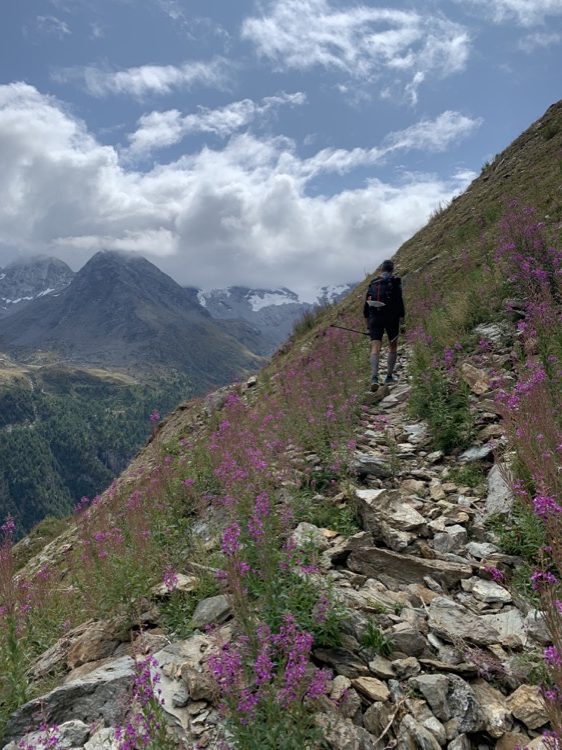 For the 10th anniversary of Tor des Géants, the Italian race organization created an even longer event, the inaugural Tor des Glaciers. By the numbers, it was 450k completed in a single push with approximately 105,000 feet of climbing—around 120k longer with 30,000 more feet of climb and descent than the traditional Tor des Géants. All participants had to have completed Géants in 120 hours and most, including myself, had at least a few prior finishes. Racers had 190 hours to complete this new course, which at least on paper seemed generous, especially with a pre-qualified field. Silly, silly hubris, and in hindsight only 40% of the field would finish. Sometimes my own speed was actually comical with my friends and family at home wondering if I was sleeping or moving, and sometimes I’m pretty sure I was doing both at the same time. Yes, Tor des Glaciers, named not for the views but for my glacial “running” speed as I traversed the high mountain passes and the scrambling, rambling descents. The two key differences in Glaciers, aside from the added length, were navigation and terrain. The course was completely unmarked, no flags, no signs and often, no real trail. I’m not even sure you could call this trail running as neither trails nor running were a consistent part of the experience. The terrain was challenging and at times, terrifying. I heard one racer aptly describe it as a 450k Skyrace. There were knife-edge ridges, Fourth and Fifth Class scrambles complete with pseudo via ferrata sets of fixed lines, chains and ladders. All of which kept runners fully occupied and moving slowly forward for over a week as we passed iconic landmarks like Mont Blanc, Grand Paradiso, the Matterhorn and Monte Rosa.

We ran out of the Italian town of Courmayeur as the last light left Mount Blanc on a Friday evening, christened as Argonauts by the race organization and cheered on by the warmth of the Aosta community that fiercely loves the mountains and the Tor. Over the first climb many of us stayed together in a large group as we eased into the task at hand, but as the night wore on, the field slowly separated. And then it started snowing. And then the wind started to roar. And then I realized I was going the wrong way. After a short detour, I got back on track and moved through the night, grateful that I didn’t keep trudging towards France since I didn’t bring my passport and I don’t speak any French. Just before dawn came our first real technical climb, Col Planaval, and as I clung to the fixed ropes while inching along a small ledge, I took some comfort that I could not see how much exposure was below me. I could create my own reality, and thus I decided that the ground was only five feet down. On the subsequent descent I finally got to use the light crampons that I’d lugged around for the last three years as part of the mandatory Tor gear, as we encountered a wonderfully consolidated snowfield. The sun rose, and I settled into a strange rhythm of forward motion, eating and occasional restless sleep. 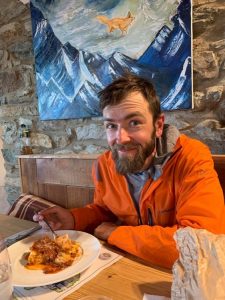 Every 15-25 km, there was a mountain hut or Rifugio that served as aid station. I ate a lot and I ate everything. Lasagna, pasta, polenta, bread, meat and cheese, an occasional pie, and even homemade gelato at Rifugio Bezzi. At some point I discovered butter—butter on everything, delicious butter that I imagined being made by the happiest cows in the world I would often pass high in the mountain meadows. Sometimes I thanked the cows as I passed. At one point several nights into sleep deprivation, one responded. But the cow spoke French so I didn’t understand what she said. Why do cows speak French in Italy? Strange. The hut keepers were warm and friendly, quick with a coffee or smile. One even drew me a map with directions for one of the more difficult passes or Cols, complete with useful landmarks like “that funny-shaped rock,” “the small triangle of snow” and “not over the cliff.” Over the last three years, I’ve learned Italian simply to be able to have conversations with these wonderful mountain folks (and so I don’t end up eating snails again).

I spent most of the time alone, rarely crossing paths with another racer and usually only as we came in and out of the huts. Sometimes we’d share a bowl of pasta or a few words here and there. For the last half of the race I seemed to be around the same three people—one Japanese, one Swiss, and one Polish—and I’m sure that our stuttering conversations in mixed languages was quite comical. Except for the Swiss guy because he spoke seemingly endless different languages flawlessly. As we crept closer to the end, these few terse words were replaced by big, smelly hugs and knowing looks.

I had crew for the race, exceptional crew for whom I am immensely grateful. Wife and my life crew, Janel. While there were only three life bases (larger towns along the way with more extensive aid, medical, etc.) Janel came to several of the mountain huts as well, hauling a pizza or cheeseburger or some other delicacy to fuel my blazing engine. But more important than the food (and I suppose even more than cleaning my feet for me), she assured me that we were brave enough for this journey. On the fifth night, she met me at the foot of the Matterhorn at Rifugio Abruzzi and we shared a meal, which I hold fast as one of my favorite memories. My eight-year-old daughter also met me at the three life bases and I relished her hugs and kisses, although perhaps she did not enjoy them quite as much as she kept reminding me to brush my teeth. She did tell me that she is going to run the race with me when she is old enough, so I suppose I’ll keep in shape for the next 10 years.

The final piece of my crew was my mother-in-law whose cheers were loud and strong. She even climbed up a few thousand feet to one of the mountain huts.

I would intermittently sleep at the huts as well, perhaps 10-12 hours over the 7 total nights, as well as the occasional momentary dirt nap. Once I woke up in the grass in broad daylight, poles still in my hand. It was a strange restless sleep in which I was never really sure that I was fully out. Dreams were more like conversations in a distant room, and I think this was part of the overwhelming sense of presence and immediacy of this experience. Distance and time lost their traditional meanings of measurement and analysis, and conceptually became just another sphere of the experience occasionally floating closer or farther from the moment. In fact, most things settled into a similar construct of this strange world. Searing pain in my knee or quads (honestly most of my body parts at one time or another) had no real meaning, it was just pain, neither good nor bad. These pains too would float away or return in some indiscernible pattern. Fatigue, fear and joy also became hard to define. It was somewhat of a slow burn reverie, humbling and occasionally dark in nature, and I had no choice but to accept it. I felt the energy and existence of that which was around me. 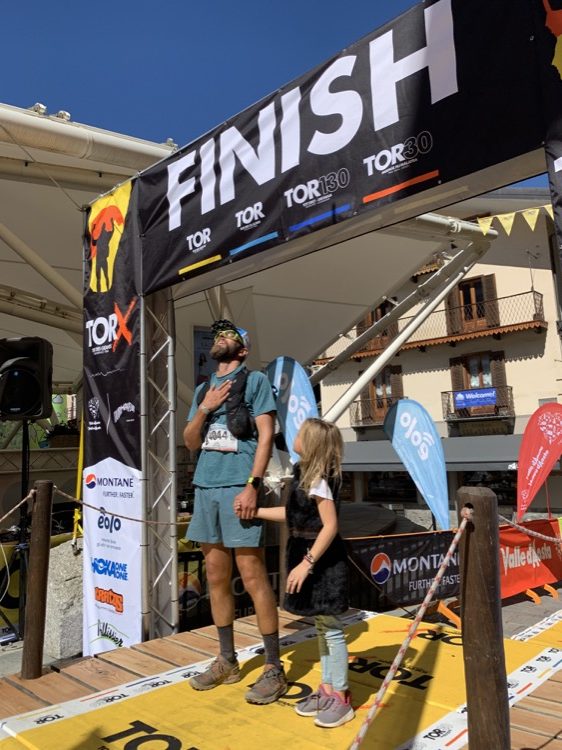 As a good friend put it, “The Tor is unique to each individual, perhaps more akin to taking LSD than running a trail race.” You don’t run this race for the physical challenge. I don’t think you even run it for the mental challenge. You run it to strip away your comfort and pretense, and expose yourself to yourself. It’s not always pretty what you find, but you will undoubtedly find something. Something deep, something primal and something that is you.

On the final 3,000-foot descent into Courmayeur, I looked, perhaps, like I belonged on the late night dance floor of a wedding rather than on the mountain trails, as my quads reduced my downhills to a strange, drunken jig and my eyes kept leaking. But after 161 hours and 39 minutes, I savored the last few steps and was done. I finished in seventh place overall, a proud part of the first edition of Tor Des Glaciers. As I hobbled around the streets of town in the days after the race, trying to find the shortest route between the gelato shop and the pizza place, I was filled with an immense sense of gratitude (and an occasional drink of Genepi). Gratitude for my family, this opportunity, friends I’ve made through Tor, mountains, long nights, snow and rain, the endless sky, polenta, waking dreams and hallucinations, and the community created around the race. I had a deep fatigue and a somewhat broken body, and while my tank was empty, my heart was full.

Wow…my respect for you and all who toed the line for Tor des Glaciers is enermous. Moreso since I did my first Tor Des Geants and just barely finished…I can only hope to accomplish such… Bravo!

What a great article John! And moreover my sincere compliments for your race. Awesome!!!
By the way…I was there as well, I ran the ‘classic’ TOR in 146 hours and well honestly I think that the Glaciers is too much for me…
Reading your words I was literally reviewing my race: same feelings, emotions, pain, allucination, etc etc…
Did you cry as well? I cried as a baby few minutes after I crossed the finish line and also at the end of the closure ceremony of sunday.
Only difference is that I did not speak to the cows. Or did I? Boh…who knows? LOL :-)))

With my best regards
Gianluca

Congratulations on a really nice written piece and a very special achievement.

Thanks John for sharing this part of your epic adventure. I’m pretty sure that besides those cows speaking French you have more memories to share. As an espectador, I was tracking all the racers during the event. Thank you for an amazing performance!!