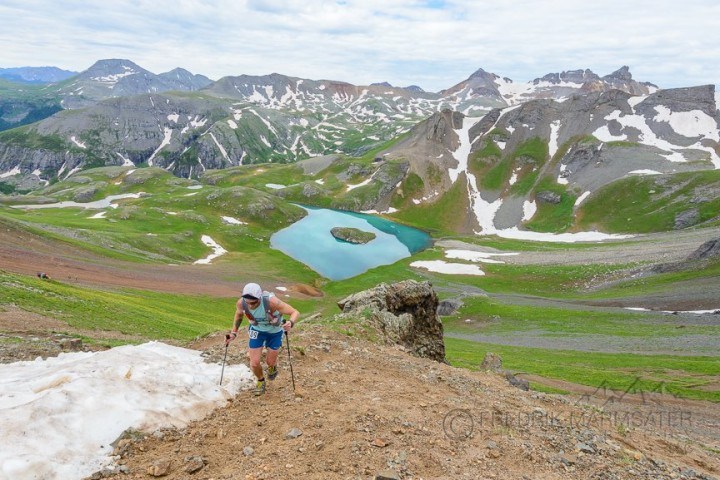 With summer fading into a distant memory, you may already be reminiscing about sitting around the campfire under the stars. No matter what your age, those memories of being outside next to the crackling fire never seem to fade. Now imagine you’ve just finished a full day of running camp with Jeff Browning aka “Bronco Billy” and Karl “Speedgoat” Meltzer. Eight campers got to do just that this past August, spending five days running in the San Juan Mountains on parts of the Hardrock course and picking the brains of two of ultra running’s most decorated 100-mile veterans. With Bronco Billy and Speedgoat leading daily runs up iconic trails to places like Handies Peak (a 14,058-foot summit in the San Juans), these campers were in good hands.

Based out of the Colorado Running Ranch, a world class high altitude training center located just 15 minutes from Durango, runners were treated to some of the most breathtaking views in the San Juans, with runs along the Colorado Trail, Ice Lake and Island Loop. Mileage each day ranged from 10 – 21 miles, with all runners supported by a sweeper, roving coaches and a lead group for those with a faster pace. In the evenings, down time included mountain safety discussions with lessons on everything from what to pack in a mountain kit (and why so much gear is required), to storm and lightning preparation.

Home-cooked meals were served each day, with the menu centered around Optimized Fat Metabolism (OFM) ingredients. Bronco Billy also shared his knowledge at one of the evening campfire chats to talk nutrition and “demystify” the OFM diet for his campers. Nutrition is one of Bronco Billy’s areas of expertise and because about half of the group was already following the OFM diet, this topic was a popular one. With the camp’s focus on mountain running, both Jeff and Karl got to re-live some of their most memorable ultra experiences with their campers  including getting kicked by a moose, being stuck on American Basin for an hour in a lightning storm during Hardrock, and so many more.

Attendees of the Bronco Billy / Speedgoat Camp were welcomed with swag bags that included shoes, gear and nutrition goodies, along with a guest appearance by Jason Schlarb – 2016 Hardrock winner, who lives just down the road. Not to mention getting an opportunity to demo Black Diamond trekking poles, a Bronco strength training sesh at the trailhead, and bonding over daily mountain adventures.

Runners will find that Bronco Billy and Speedgoat each have a wealth of information that comes from both their experience and leadership in the sport, which they are excited to share with campers who want to learn more about ultra running. There’s no doubt that campers attending this adventure-packed camp in the San Juans made some of their own memories, and conquered fears they never thought possible.  Learn more at coloradorunningranch.com.

The camp sounds like fun, and FYI – its Island Lake in the background of the photo. Ice Lake is around the shoulder behind Island Lake.