The Rough Trail 50K is aptly named. With 6,500 feet of vertical gain and loss over 31 miles through the rugged and technical terrain of the Red River Gorge in Kentucky, it is understandable why race director Michael Whisman of Next Opportunity Events (NOE) cautions against making the Rough Trail 50K your first ultra marathon. In fact, Michael is swiftly gaining a reputation in Kentucky as a race director – with a funny sense of humor.

Notorious for his many water crossings, highly technical routes and the inevitable steep ascent right before the end of a race (just in case your soul had not yet been crushed), many runners join in on NOE races because they are a test of endurance and will, and have the added perk of going through some of the most beautiful parts of Kentucky. However, some unfamiliar runners learn Whisman’s antics the hard way.

“I ran the Breaks Ultra he put on recently,” explained my fellow aid station volunteer, Joe. “He gives you a wooden axe as a medal at the end. I told him he might want to reconsider giving people axes at the end of his races if he insisted on making them so brutal, otherwise he might wind up losing his head.” We both laughed and I thought about the last race I ran with NOE, The Reaper (now discontinued), a beautiful, no BS 30k around Cave Run Lake with its fair share of climbing and water crossings. 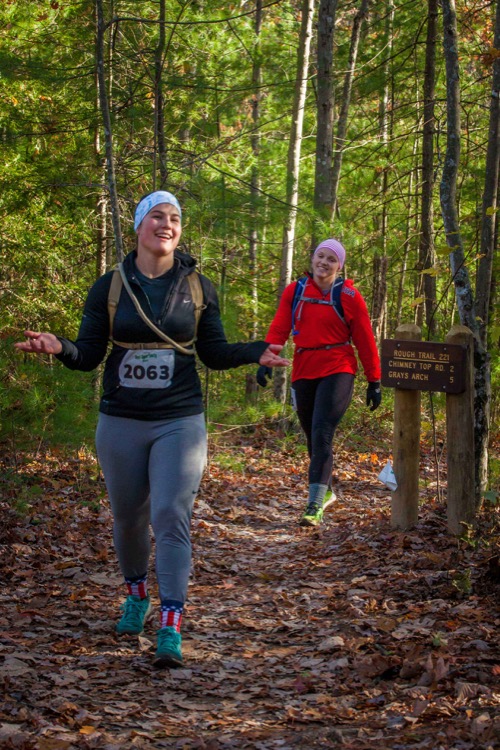 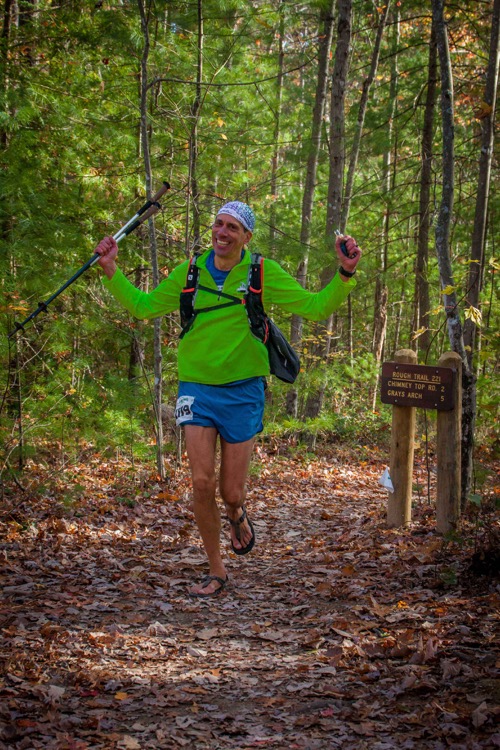 This is how Whisman names his races: The Rough Trail, The Reaper and The War Hammer—his 100-miler through the Daniel Boone National Forest. His wooden, handmade medals are often similar to something a Norse God might wield—hammers, axes, swords—anything goes at a NOE race. The day of the Rough Trail, named after the route it follows through the Red River Gorge, would prove no different when it came to testing runners.

Often a participant of trail races and occasionally a volunteer, I have come to find that there are four types of trail runners: the competitors, the exuberant, the befuddled and the homicidal.

The competitors, as the name would suggest, are the focused superheroes at the front looking to nab a top three spot or a personal PR. The first runners, Justin Agler and Sidney Noble, who were first and second place finishers respectively, both shot through the aid station so fast we had to scramble just to get their names and bib numbers documented. Similarly, the first-place female, Alondra Moody, moved through the station quickly, but unlike the top male runners, she was sporting a huge smile. She looked strong, but also, like she was having a blast. 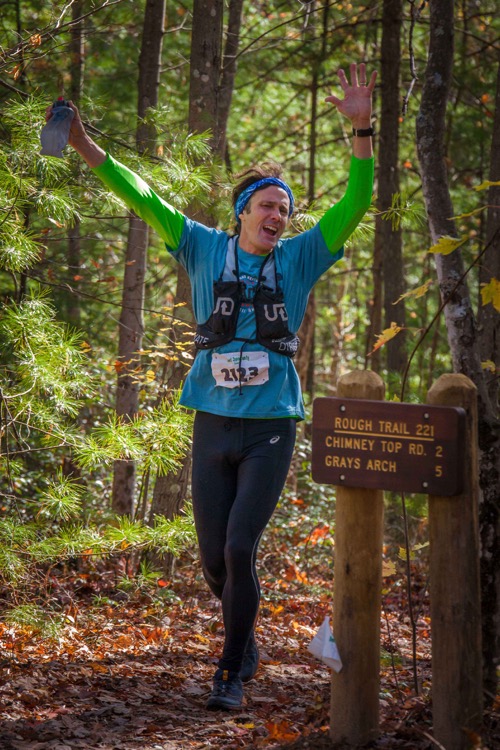 I like to think most runners fall into the exuberant category, but there were some standouts in this race. As I looked down the barrel of my telephoto lens on the trail where runners appeared, I saw movement followed by a cry of, “I’m coming! Don’t worry!”

“I’m following it, darlin’!” the runner called back with that oh-so-southern aphorism. We cheered him on as he made his way up the trail, took a bit of water and changed socks before bounding back down.

The befuddled and the homicidal runners have a tendency to run in packs. These are the guys that maybe didn’t know what they were getting into—first-time ultra marathoners, road runners looking for a change of scenery or those from the surrounding areas who made the mistake of thinking that Kentucky trail races were surely a flat course.

In and out they came, and we checked names off our list while noting DNFs. I was green with envy the whole time as I saw runners sweat their way up and down the mountain. One thing is for sure. Next year, there is no way I am not running the Rough Trail 50K!