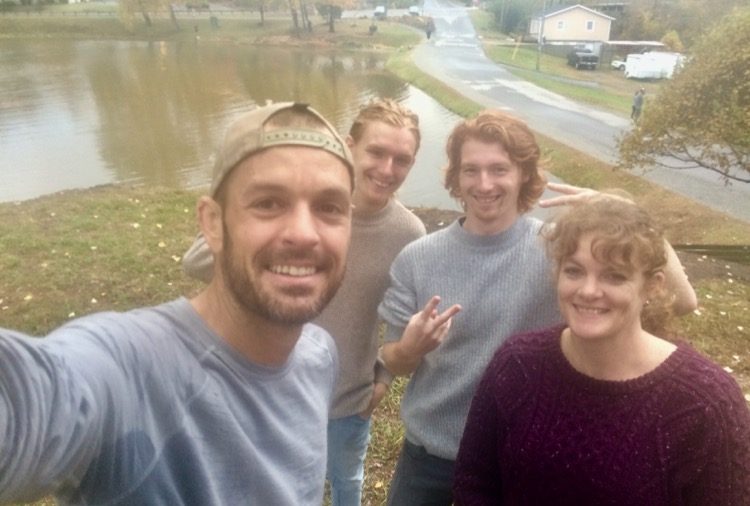 Drew gets a quick shot with his cousin and her sons. Photo courtesy Drew Dinan.

Good Things Happen When We Go Outside

A few weeks ago, I found myself traveling from Oregon to a small town outside of Asheville, North Carolina. I was on a golf trip with old high school buddies and unfortunately, didn’t have enough time to explore the nearby trails of the Blue Ridge Mountains. They were all lit up with fall foliage like something out of a Bob Ross painting, and just begging me to skip out on hitting little white balls. But this trip was about reconnecting with friends, not about running, so I reluctantly tossed on a polo shirt and headed to the tee box instead of the single track.

Despite the early morning golf rounds and late-night card games, the likes of which I hadn’t played in decades and for good reason (remember the game Asshole?), I made it a point to run a few miles every morning—albeit on pavement rather than happy trails.

On the second morning I went for a run just a few blocks from our vacation rental with the intention of running laps around a small lake I had found in a Strava segment search. Near the end of the first loop, I noticed a red-haired woman out of the corner of my eye who looked oddly familiar. That looks like my cousin, I thought to myself before my brain reminded me I was going on two hours of hop-induced sleep and was likely just hallucinating.

Questioning my instincts, I ran around the lake once more to get a better look at the imposter. Sure enough, as I passed her the second time, I concluded this was in fact my cousin and realized that the two young men with her must be her two sons whom I had never even met before.

When I approached the group, still in disbelief, my cousin who I had not seen in over 15 years, broke the ice. “I thought that was you,” she said.

We talked for a few minutes, I invited her boys to come out to Oregon to do some bouldering, and then I headed back to the cabin to take a quick shower before hitting the links. As I was running back, I couldn’t believe the good fortune I had just experienced by bumping into relatives at such a random place. My cousins lived over six hours away and they happened to stop for a walk at the same lake and at the same time that I decided to go for a run. What were the odds?

After telling my friends of this chance encounter, I chalked it up as a one of life’s great coincidences, and went back to shanking drives and missing two-foot putts.

The next morning, I decided to take a quick run around the same lake before driving to Charlotte to catch my flight home. Just up the hill from the lake, on the same exact route I had run the previous morning, I noticed a woman pushing a baby stroller.

Sure enough, for the second day in a row, I ran into one of my cousins. And to top it off, I got to meet her baby for the first time. (If you’re wondering, these cousins have never even met each other. They aren’t even on the same side of the family.) 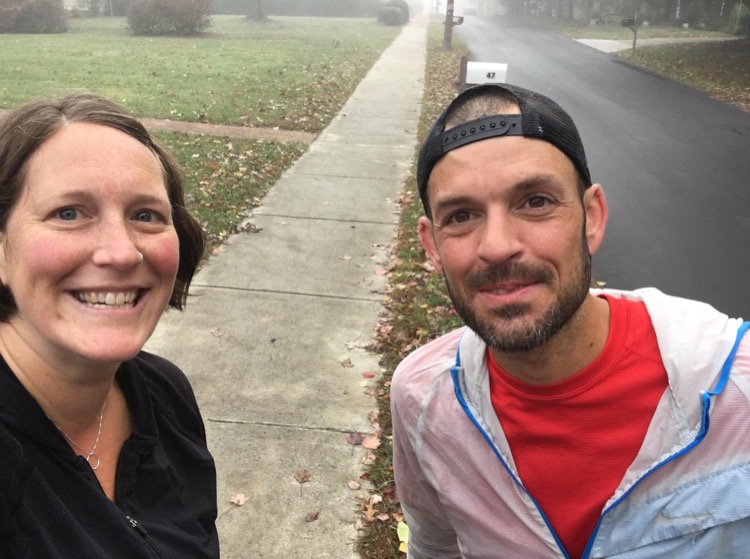 The author with his cousin Kim. Photo courtesy Drew Dinan.

At the airport, I posted on Facebook about my improbable encounters. Among the “likes” and “no ways,” I noticed a comment from a friend.

He wrote: “Good things happen when we go outside.”

I thought about this statement as I flew home.

Good things happen when we go outside. I reflected on how many amazing things have happened in my life since becoming a runner and spending countless hours outside.

Good things happen when we go outside.

I would never have seen my cousins if I had slept in on those mornings in North Carolina instead of going for a run. And who knows, I may have gone the rest of my life without getting the chance to meet both of my cousins’ children since we all live on opposite sides of the country.

There were several other Facebook comments suggesting that I buy a lottery ticket. Luck must be on my side, they wrote.

“Nah,” I just wanted to write back. “Good things happen when we go outside.”