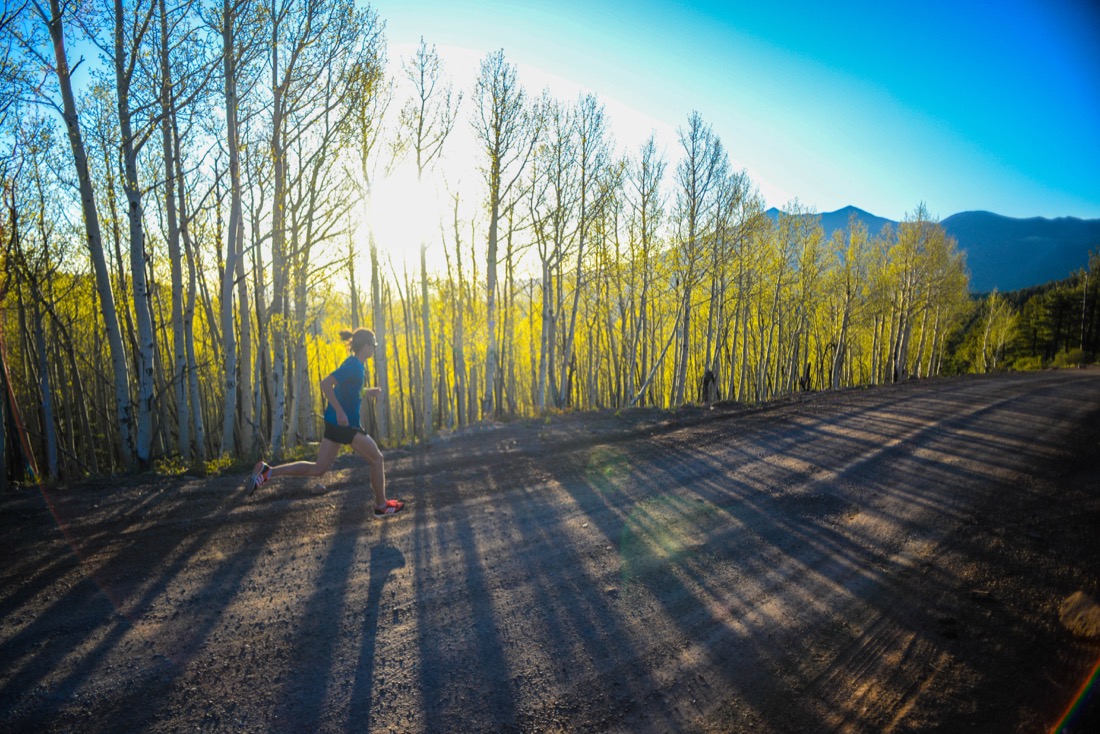 Jim Walmsley does it all in training—big miles, big vert, and plenty of speed. Photo: Nico Barraza

Everyone in the ultra community knew about Jurek. Many knew about Bonnet. What no one knew at the time was that back in Phoenix, Bonnet’s high school freshman teammate, Jim Walmsley, would himself be poised to win this prestigious contest eleven years later. Recalling Bonnet’s unusual high school ultrarunning career, and in particular Western States, from his perspective as a 14-year-old, Walmsley says, “I knew he did these weird races, and I had zero interest in it. Who would ever want to run 100 miles?”

Walmsley was all about the track back then, and he would remain singly focused on that aspect of running for the next eight years. This period saw him win a high school state cross country championship and run 4:17 for the mile. At the Air Force Academy, he would win four Mountain West Conference Titles and run impressive personal best times of 4:04 for the mile and 13:52 for the 5,000m.

In hindsight, there were glimpses of ultrarunning potential: an 8:41 All-American steeplechase performance, for instance (and this in the first year that Walmsley tried the event). The steeple is a grueling track event that has produced a number of successful mountain and ultrarunners. Walmsley also proved resilient, running 80 or more miles per week at 7,200 feet of elevation in Colorado Springs, all while going through the demanding Academy.

He has the talent and raw speed of Max King and Rob Krar, but has turned to the sport at a much earlier age (he is currently 26 years old). Walmsley is likely the fastest man in ultrarunning right now. However, if you were only following race results, his first few years weren’t exceedingly impressive. He showed glimpses of greatness—beating David Roche and Justin Houck at the 2013 Don’t Fence Me In 30k, for instance—but victories were counterbalanced by blowups.

When the whole picture is taken into account, Walmsley’s story starts to make more sense. In 2014, when he started to dabble in trail and ultra races, he was also working 24-hour shifts underground in an Air Force base in Great Falls, MT. His training was sporadic and mixed with plenty of days off. After a poor showing at the Speedgoat 50K that year (“I completely got whooped by everybody”), Walmsley had a wakeup call. He thought, “I need to take some time off [racing] because I’m not fit, and I can’t just force races—at the bigger races, guys are pretty fit and pretty good.”

Re-enter Bonnet. On his own journey away from the ultrarunning world and back again, Walmsley’s old teammate had found a place on the AdiUltra Team, headed by Ian Torrence. Bonnet was running well again and following the sport. He had seen that Walmsley ran a couple 50k races, and recruited him to join some AdiUltra runners for the JFK 50 Mile team competition. With only a month to the race, Walmsley has little time to prepare for his first 50-mile foray.

Torrence headed up the team for JFK and had been frustrated the previous year when his team had too many DNFs to log a team score. Thus, Walmsley was instructed to stay in the group, running with Bonnet through the Appalachian Trail section of the course. Mid-way through the race, on the towpath along the Potomac, Walmsley got antsy and moved to the lead for good. However, he struggled with the distance some, saying, “For my first 50 [mile] that was a really long time to be myself, mentally.”  Nevertheless, he notched a win in 5:56:31.

In March 2015, Walmsley’s Air Force post in Montana ended, and he moved back to Arizona, spending three months in Phoenix before making his way to Flagstaff. He was finally able to put in more quality training, leading to solid finishes at the Moab Red Hot 55K (3rd place, despite a strained ankle from a trail fall) and Lake Sonoma 50 Mile (5th place, despite a bike wreck that caused him to miss the two weeks of training prior to the race).

Put in context, between the 24-hour work shifts and some bad luck with a few falls, Walmsley’s first year of ultras is actually incredibly impressive. It would make one wonder what he’s capable of once things started going right. Fortunately for Walmsley as well as ultrarunning fans, we’re now starting to see.

He had one more difficult race at the 2015 100km World Championships—which he blames on a lack of focus and poor fueling—but since then, he has been untouchable. Not only by his competitors, but also by runners past. Earlier this year, he shattered course records at the Bandera 100K (his Western States qualifier) and Lake Sonoma 50 Mile—well clear of the competition and well under the stout records of Jorge Maravilla and Alex Varner, respectively.

From a mental perspective, Walmsley notes two areas where he has greatly improved this year. “First,” he says, “I embrace and handle running by myself really well now. Second, late in a race, when everyone feels like garbage, including me, I still keep moving really well through it.” He calls this having his “ultra legs” under him.

As for training, Walmsley has finally been able to string together consistent high mileage weeks. He also credits his move to Flagstaff, which sits at an elevation of 6,900 feet. Looking to Western States, Walmsley says, “I want to train to win it, so I’m going to push the envelope. I’m going to put in some really big weeks, both mileage and climbing.”

In May, just over a month out from Western States, Walmsley hit his training peak, logging two consecutive 140-mile weeks, one with 22,000 feet of elevation gain and the other with 14,000 feet. Not only are the numbers staggeringly high, but Walmsley runs a lot of these miles rather quickly, cruising 20-mile or even longer runs with road running professionals, often around 6:00 per mile pace, at altitude.

Acknowledging that this volume and intensity of training is risky, Walmsley nevertheless feels he can run well tired and sense when he’s doing too much. He also credits Bonnet with reining him in. Walmsley says, “[Bonnet is] like my common sense side, telling me, ‘don’t do that, that’s stupid,’” helping Walmsley resist the temptation to hop into the Zane Grey 50 Mile when his race schedule was already packed, for example. Bonnet will also be pacing Walmsley at Western States, ideally for the last 38 miles of the race, bringing course experience and the common sense that is usually deemed necessary for the 100-mile distance.

Like Rob Krar, the winner of Western States the last two years, Walmsley is ideally suited for a hot race. He even says he’s hoping for it. Walmsley is rail thin—thus producing less heat than bigger runners—and trains in the heat of Arizona. He also puts in big days in the Grand Canyon, which is nearly unparalleled for its long descents, a key skill for Western States success.

It sounds like Walmsley has taken strategic cues from Krar as well, who has shown a remarkable ability to balance early-race patience with strong, late-race moves. Walmsley says, “The biggest thing is to run smart—not getting impatient, not going too early—but timing any move just right.”

Half joking about his time goal for the race, Walmsley mentions that his GPS watch battery only lasts 15 hours, so he’ll need to run faster than that. “But at the end of the day,” he says, “it’s 100 percent about competing—it doesn’t matter if it’s 14 hours or 18 hours, if you win Western States, that’s definitely the prize.”

While Krar isn’t returning to this year’s Western States, Walmsley won’t be hurting for competition. From Sage Canaday and David Laney, to top Europeans like François D’Haene and Didrik Hermansen, the race will likely be the most competitive in the U.S. this year. It’s hard to win your 100-mile debut against top-flight veterans, but Walmsley has set himself up to do just that. Some may think he’s flown too close to the sun, but then, he loves the heat.

Excellent writing and storytelling about Walmsley and his road to ultrarunning. Surprised you didn’t touch on his Samson-like hair — 2015 to 2016 he went from high-and-tight to Scott Jurek-lock status!