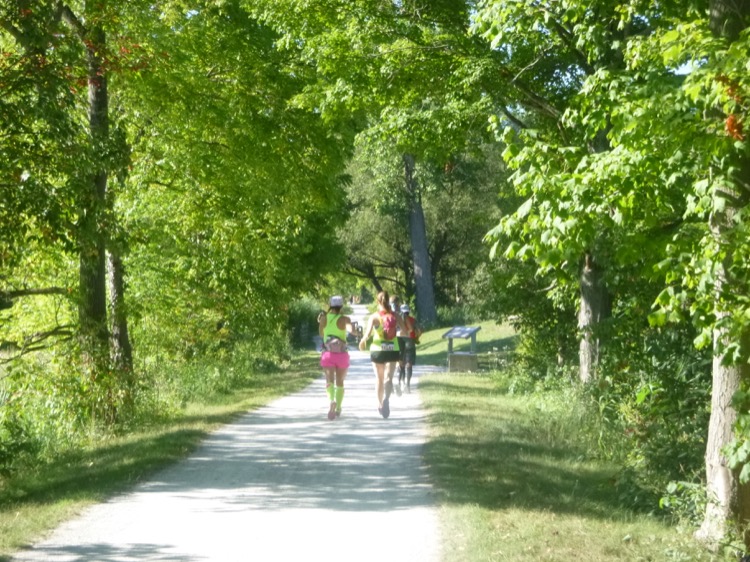 The race’s name, “Burning River,” is of course ironic, harkening back to the numerous times the Cuyahoga River, once one of America’s most polluted waterways, actually caught on fire. A 1968 university study described the river thus, “The surface is covered with [a] brown oily film…large quantities of black heavy oil floating in slicks, sometimes several inches thick, are observed frequently. Debris and trash are commonly caught up in these slicks forming an unsightly floating mess. Animal life does not exist.”

But redemption was at hand. A 1969 Cuyahoga River fire and the subsequent coverage by Time magazine contributed significantly to the environmental movement in the US, leading to water pollution control legislation, the Clean Water Act, and the founding of the Environmental Protection Agency.

Today with the pollution largely gone and the point-to-point course winding through the showpiece Cleveland Metroparks, Cuyahoga Valley National Park and Summit Metroparks, the Burning River Endurance Runs wears the once ignominious name with pride.

And what a course! It visits parkland forests, the Ledges rock formations, historical and possibly-haunted Boston Mills, the Ohio and Erie Canal, scenic towpaths, Buckeye Trail, Brandywine Falls, gargantuan overpasses and underpasses, a covered bridge, and of course long stretches of the Cuyahoga River. It begins at Squire’s Castle, a fanciful faux-medieval shell of a building dating from the 1890s near Cleveland and ends gloriously on a long sweep of Front Street in downtown Cuyahoga Falls. Many of the course’s trails date back to the Native American tribes that lived in the area. The name Cuyahoga comes from the Mohawk and variously means “at the river” or “crooked river.” The construction of the Ohio & Erie Canal opened up Ohio to settlement.

The complicated logistics for a point-to-point course are handled to perfection at Burning River. Hats off to race directors Joe Jurczyk and Jim Christ and their army of volunteers. There were a hundred miles of little yellow flags, “BR100” tape arrows on roadways, signs, ribbons, glow tabs, and directional stacks that defied my attempts to get off course even after all my thinking skills had left me. Drop bags were popped into your hands at aid stations where there was always plenty to eat and a dozen volunteers to help out. It was like arriving in a bustling town but deep in a forest or way out in a field.

Even the outer trappings of race weekend were exceptional. The host hotel, the Sheraton Suites in Cuyahoga Falls, was fantastic and steps from the finish. The bus to the start was right outside the door. Packet pick up was well organized and the pre-race meal was well above average featuring mushroom stuffed ravioli that any ravioli fan would kill for.

In addition to the large 100 mile field of 250 that had to be accommodated, there were two 50 mile options (start to Boston Mills, or Boston Mills to the finish), and a crowded relay option for the 100 mile. The fifty milers certainly livened things up for the plodding hundred milers, and the relay runners streaming by all day saying, “Way to go, Hundred Miler,” made the run even more special.

The weather accommodated this year for the most part, sending some clouds and breezes our way and delivering bearable temps in the high 80s. But this is not a course to underestimate. There are lots of open areas where the sun comes into play and plenty of steep little hills to overcome.

The time limit is 30 hours which proved too demanding for half the field. I found out the hard way that if you’re a little overweight, a little undertrained, and you’re heat training has been nil, you can get to 71 miles feeling worse than what the cat dragged in, right up against the cutoff, and ready to throw in the towel. But if you’re prepared for this event, it’s going to be one of the most awesome and rewarding hundreds you’ve ever done.

Nice article. Is it possible to also include the back 50 results?

Yes, we will get these posted shortly. Thanks!