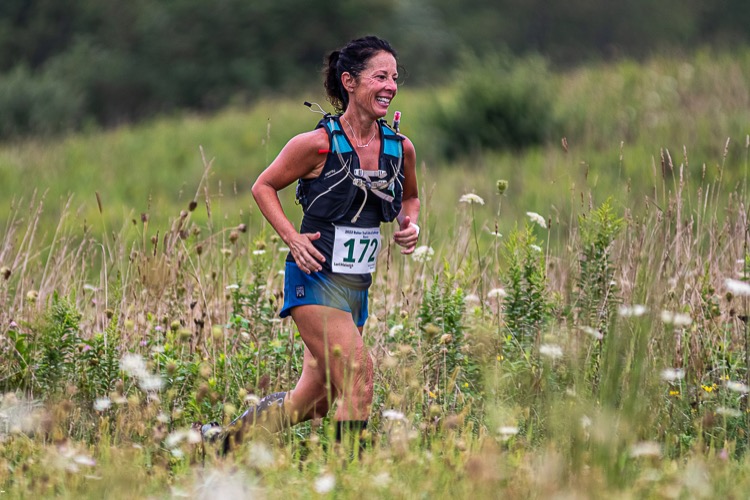 Lori Malazich, new to the 50-mile distance, cruises through the equestrian field at mile 13 of the 2022 Baker Trail UltraChallenge. Photo: Mike McNeil

Courage is Contagious: Women and Ultrarunning

In August 27, 2022, in rural northwestern Pennsylvania, women toed the line for the 18th annual Baker Trail UltraChallenge in unprecedented numbers. For the first the time in 18 years, the 50-mile race surpassed the stagnant ratio of 80% men to 20% women, and instead, saw 35% female entrants.

As a board member of the nonprofit that hosts the race and an ultrarunner myself, I examined our registration database and observed an obvious disparity.

Bucking a trend that has held for nearly two decades doesn’t happen overnight, but with perseverance and the right strategies, meaningful change can occur in a matter of months.

We started with a series of raffles where complimentary entries were earmarked for 15 women. The raffles not only raised general awareness, but perhaps more importantly, they planted seeds in the minds of many females. A wide range of women who would not have considered racing this distance found themselves pondering the notion of a 50-miler. “I did the raffle to push me to register because I was afraid, not necessarily because it was free,” said one woman. And courage is contagious.

With the help of social media, we were able to shine a light on the raffle winners, creating visibility and awareness. The catch phrase, “If she can see it, she can be it,” trademarked by the Geena Davis Institute on Gender in Media, speaks to the importance of role models in all aspects of life. Gillian Anderson’s role in The X-Files inspired thousands of girls and women to pursue careers in science and medicine, a phenomena now referred to as “The Scully Effect.” Female participation in the sport of archery doubled after the movie The Hunger Games.

“Seeing other people, including women, doing ultras showed me that I could, too,” said Julia Mericle, one of this year’s Baker Ultra contestants. From another runner, “Representation matters. Once I saw an everyday athlete like me competing, not elite at all, I thought about racing at that distance.”

Another important initiative included hosting and promoting training runs, which were free and open to anyone. Covering all 50 miles of the course, spanning three separate runs, women and men alike were given the opportunity to gain the required confidence. In some cases, these runs tipped the scale and led to a registration. Lori Malazich serves as a prime example. Initially, when asked about her 50-miler hesitations, Malazich quickly ticked off her concerns, “It’s too hot, I’ll get lost, too much vert, I won’t make the cutoff. How do I even train for a distance like that?” After the third and final training run (and lots of coaxing), Malazich registered. And despite an unseasonably hot day and relentless climbs (officially 7,000 feet of vertical gain), she beat the cutoff by nearly two hours, with dozens of men and women finishing behind her.

Shannon McKenzie was another raffle winner new to the 50-mile distance. With no prior ultrarunning experience, (a marathon in 1999 was her longest race coming into the Baker Ultra), McKenzie was the top female runner and placed third overall in a time of 9 hours and 23 minutes. Without the incentive of the raffle, McKenzie said she would have been less likely to consider the race.

But even with free entries and positive role models, some barriers are hard to break, with roots that go deep. The biggest roadblock, by far, was women contending with age-old gender norms that saddle them with the bulk of domestic labor and childcare, severely restricting training time. Even in 2022, the dilemma is normalized and often goes unnoticed.

A recent online poll conducted on a female-only ultrarunning group yielded a litany of testimony on the topic of domestic barriers to training. One respondent commented on the difficulty of engaging in longer runs due to a husband who insisted on her help “watching the kids.” More generally, another observed the long-standing imbalance between men and women. “Most men seem to do what they want when they want, and their wives hold down the fort at home.” Another theme was women needing to feel 100% “qualified” before tackling any major endeavor. One female ultrarunner who happens to work in the STEM field pointed out, “A lot of the men I work with aren’t smarter or better prepared. Plenty show up because they think they belong and assume they’ll figure out the details along the way. The parallels between ultrarunning and STEM gender distribution are striking.”

The vast majority of women who won an entry to this year’s Baker Trail UltraChallenge indicated they will come back in 2023. Increased female participation can serve as inspiration to others and work to assuage general self-doubt. Our takeaway this year: role models matter. Visibility leads to the realization that we can do hard things. And as first-time ultrarunner Lori Malazich would say, “Success begins with the decision to try.”