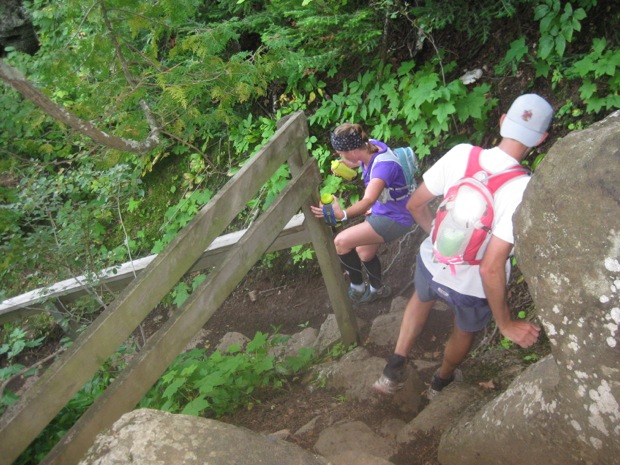 By the Shores of Gitche Gumee

I could see the plank was tilted. I could see the slip marks in the black mud on the end of the board. I could see the footprints next to the plank where other runners had stepped to avoid the danger. I was telling myself, “Don’t put your foot on the board.” But I put my foot there anyway and instantly found myself splayed out in the mud, having karate chopped the board savagely with my left arm and hand as I went down.

Lesson learned. And the fierce pain in my hand reminded me of that particular teachable moment for hours afterward. There you have a big part of the story of the Superior 100 Mile Trail race. Correctly billed as “Rugged, Relentless, Remote,” the race requires focus on almost every step you take or suffer the consequences.

The Superior Hiking Trail, which passes through the Sawtooth Mountain Range along the shores of Lake Superior in northern Minnesota, provides a spectacular, postcard-worthy venue. It’s a world right out of Longfellow’s epic poem about Hiawatha and Minnehaha. There are waterfalls, rushing rivers, majestic lake views, fairy tale mushrooms, carpets of moss, wild flowers, and of course gorgeous coniferous and birch forests. But there is also about 100 miles of continuously bad footing. Granted there are myriad foot bridges, stair steps, planked walkways, buried logs, and zig-zagging wooden structures to keep you up out of the bogs formed by water seeping down through the trees toward the lake—sections of the trail would be impassable without them—but avoiding bogs is only part of the fun.

There are also mazes of roots and jutting rocks everywhere. Sometimes there is nothing but roots. Sometimes there is nothing but rock, loose in piles, or in big slabs, or forming giant staircases, or in your shoes. There are long pits of black, oozing mud, impossible to avoid. You could plunge right through them but you often hit a deep spot and got a shoe full of mud for your trouble. After I finished, I took my shoes off and dumped them straight in the trash right along with my now pure black “white” socks. Really, there could not have been more than five miles of unhindered, easy, trip free running in the whole 103 mile course, fully justifying the races reputation as one of the toughest and most challenging 100 mile trail races in the world.

Tough as it is, though, the point-to-point trip from Gooseberry Falls State Park to the finish next to the pool at the Caribou Highlands Lodge in Lutsen, Minnesota, is grandly rewarding. The race is an old classic, dating back to 1991 when you could count almost all the 100s in the country on your fingers. Race organizers cultivate the “low key, old school 100 miler” vibe of the event. Race orientation is all family and very welcoming. The volunteers at the aid stations are fantastic, knowledgeable, helpful, and positive. There was good soup to sustain you through the night and thank God for the hotdogs that I snarfed at one aid station and the breakfast items later on.

The course is marked like a dream, especially the few out-and-back spurs into a couple of the aid stations. The bus ride from the Lodge to the unusually late start of 8 a.m. was luxurious. The weather was mostly cool and very moderate overnight. Breezes kept the temperature in check during the day. Finishers got a huge chunk of wood hung around their necks at the end, along with an impressive buckle and a wild hoodie with name tag and a finisher’s star to sew on later.

You have 38 hours to finish the race, so as a consequence of the late start on Friday morning, the Saturday night cutoff is well in the dark. For me, that meant a hard and dark slog all alone during the final four miles over Mystery Mountain and down into a dark muddy maze that I was convinced would never end. When I finally emerged onto a wide blacktop road and made my way down to the swimming pool at the lodge, I knew I’d been in a fight.

The only glitch I noticed in the whole affair was on the race bibs. Along with my full name it had all my info from the race application printed at the bottom, which read in part, “Male 61 Grand Master Large Wife…” followed by my wife’s name. Before returning home, I chose to ditch the bib along with my shoes and socks.