On the surface, Eve Rebennack looked rock solid as she cruised along the rolling hills of the Leona Divide 100K in Lake Hughes, CA. She was holding down third place but struggling mentally. “I didn’t go into it feeling excited or confident. I couldn’t seem to find a running rhythm.” As her mind swirled, she caught a glimpse of an iconic sign on the course, listing previous winners, most notably, Scott Jurek. “I was reminded of his quote, ‘Sometimes you just do things,’ and decided I just had to keep doing this thing. This helped me dig out of the negative space in my head and stay in the mile I was in.” The mind is a powerful tool for an ultrarunner — maybe the most important one.

Eve was an active kid who grew up in rural Indiana. She started her running career early, running both cross-country and track throughout high school. “Both teams were very small, but I made friends with a lot of other runners at meets which gave me the same sense of community that racing does now.” Her running coach was instrumental in her growth. “He taught me to love heat running, to run easy when needed, and to race smart. He kept running fun and light for me, which is something I’m incredibly grateful for as an adult. Running has always been an outlet to deal with stress and let go of negative emotions, and I credit him for my long-term love affair with this sport.”

At the 40-mile mark of Leona Divide, she passed the second-place woman. “Sometimes you just do things,” rang in Eve’s mind. The lead woman was now in her sights, and she continued pushing until she found herself running stride for stride with her. “I pushed hard coming out of the aid station, telling myself that every step I could push uphill would give me a better chance of hanging onto the lead for the remaining five miles.” Eve admits to being a conservative runner, so this was completely out of her comfort zone. She crossed the finish line as the top woman and couldn’t believe her mental transformation. “I held onto the lead, which marks the strongest positive mental shift and self-belief I’ve ever had as a runner.”

Eve has channeled her love of running into a new chapter and in early 2019, she started her own business, Rising Mountains Coaching (RMC). She’s now a full-time running coach, where she brings together her passion for running with her teaching background. “I started coaching fairly organically. I was an educator by trade but took time off to raise my kids. As they got older, I started running ultras. I helped friends with training advice and occasionally wrote training plans.”

Team RMC is now approximately 50 runners strong. “Coaching has humbled me, challenged me and helped me grow as a human and a runner. I’ve been able to see many of my runners grow and accomplish big goals, which is incredible to witness. What I like most is the supportive team environment that’s grown with the development of RMC.” 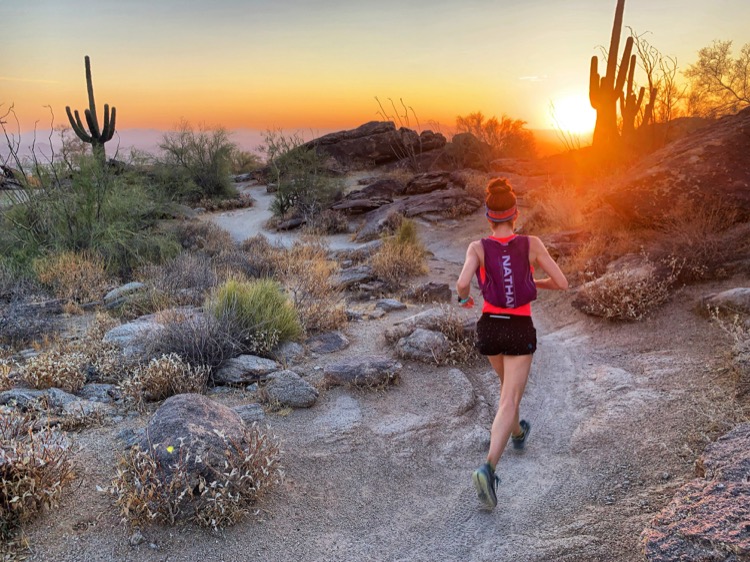 Eve smiles as she reminisces about her favorite coaching memory thus far, “Watching one of my runners finish in the Golden Hour at Javelina Jundred — it was her first 100-miler, and she went into it knowing she’d be up against the wire to finish on time. Watching her finish, hugging her immediately after, and seeing her pure joy while staring in disbelief at the buckle she’d just earned was humbling and amazing. I’m so grateful for this aspect of my running life and all of the incredible journeys I get to witness.”

Eve looks forward to her running future, hoping to one day run the iconic Western States 100, and is also intrigued by international desert stage races. She also stays busy raising her two children, and is toying with the idea of getting into rock climbing. With most races canceled this year, she hasn’t let that stop her love of adventure. Along with her partner, Stephen, they’ve gone on epic running trips close to home. “Running has taught me that I am tough, brave and strong. I can endure, even when things aren’t ideal, and can do it with humor most of the time.”