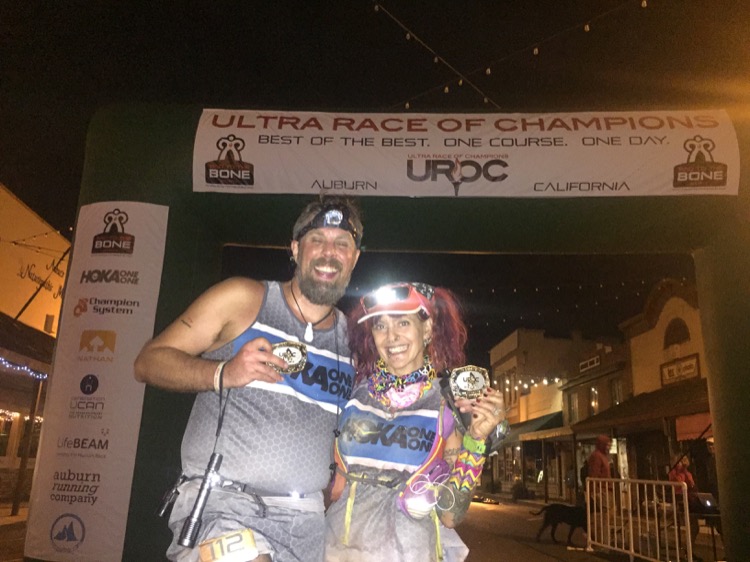 The idea for the Ultra Race of Champions 100K was conceived by its race director, James Russell Gill III. Gill, a Hoka One One sponsored athlete and long time ultrarunner and race director, saw a need for a day when the best athletes in the sport could come together and measure themselves on one course, and where everyone who wanted to be part of the event could. In addition to the 100k race, the event also includes a 50k and 25k to allow runners of all abilities to participate in the day.

The $21,000 cash purse is a way for UROC to give back to the sport and support the athletes who, through their talent, hard work and commitment, are trying to make a living as full-time long distance runners.

After two years in Summit County, the Ultra Race of Champions (UROC) moved to Auburn, California on September 26th, 2015. The race director and Elite Advisory Board (comprised of Dave Mackey, Ian Sharman, Michael Wardian, Anna Frost and Devon Yanko) selected Auburn because of its deep and long history with endurance events and its one-of-a-kind trail system along the banks of the American River.

Moving the race to Auburn required much logistical work with all the entities involved, including the City of Auburn and the State Recreation Area where the spectacular trail system is located. Race partners like NorCal Ultras and Auburn Running Company were instrumental to introducing the event to the area, recruiting the volunteers and staff necessary to make the event happen and making the elite athletes and runners feel welcome in Auburn.

The course is spectacular, challenging and fair to runners of all abilities. It includes some runnable and flatter sections on non-technical trails, followed by very challenging climbs, fast descents and technical descents, about three miles on gravel and three miles of pavement, all in the company of the American River.

Race morning began with clear skies and temperature in the 60s, but by 10 a.m., temperatures had risen to the 80s. By late morning and early afternoon, they were in the 90s.

The men’s race started with a lead group including Mario Mendoza, Justin Houck, Ford Smith, Luke Garten and Tyler Van Dyke. This group ran within a few minutes of each other until about the 40k point. By the Ponderosa Falls 55k mark, Mendoza and Houck had distanced themselves from the rest of the pack and were running side by side. They continued to run together until the 1,000-foot climb of mile-long Training Hill. After Training Hill, Houck had gained a 4-minute lead. By this point, both runners were feeling the effects of the heat and seemed to just be hanging on. Houck pushed after leaving the final aid station heading up to the Auburn Overlook and won with an impressive time of 8:53:22. Holding on to second place was speedster Mendoza, followed by Ford Smith, Tyler Van Dyke and Luke Garten.

On the women’s side, the race seemed to all be about who could be the most patient. The lead group included Kaci Lickteig, Kerrie Wlad and Magdalena Boulet. Each of these women seemed to be running conservatively early, knowing that the heat would play a major factor later in the race. Trailing not too far behind was Larisa Dannis, who ran by far the smartest race. By 30k, Boulet and Wlad had created a gap on the downhill to the river crossing. Like in the men’s race, Boulet slowly started to pull ahead of Wlad toward the Ponderosa Falls aid station.

After the turnaround, the heat started to affect all the lead women, with both Wlad and Lickteig falling off the lead pace. By Training Hill, Boulet’s lead had grown to about 10 minutes with Lickteig in second. As the women entered the Cool Loop, Larisa Dannis, after running conservatively all day, began her move up to second place. The UROC women’s podium included Magda Boulet, Larisa Dannis, Kaci Lickteig, Kerrie Wlad and Beverly Anderson-Abbs.

Staying true to the inclusive nature of ultrarunning, the race remains open to all runners. This year, UROC added two ambassadors who we feel exemplify the best of what the sport is about: Ken Michal and Catra Corbett. Both Ken and Catra have an unbridled passion for our sport and we are honored to have them as a part of the Ultra Race of Champions family.

A special thanks to all of the UROC sponsors and partners: Hoka One One, Champion System, Nathan, UCAN, LifeBeam, Fuel 100, NorCal Ultras and Auburn Running Company.