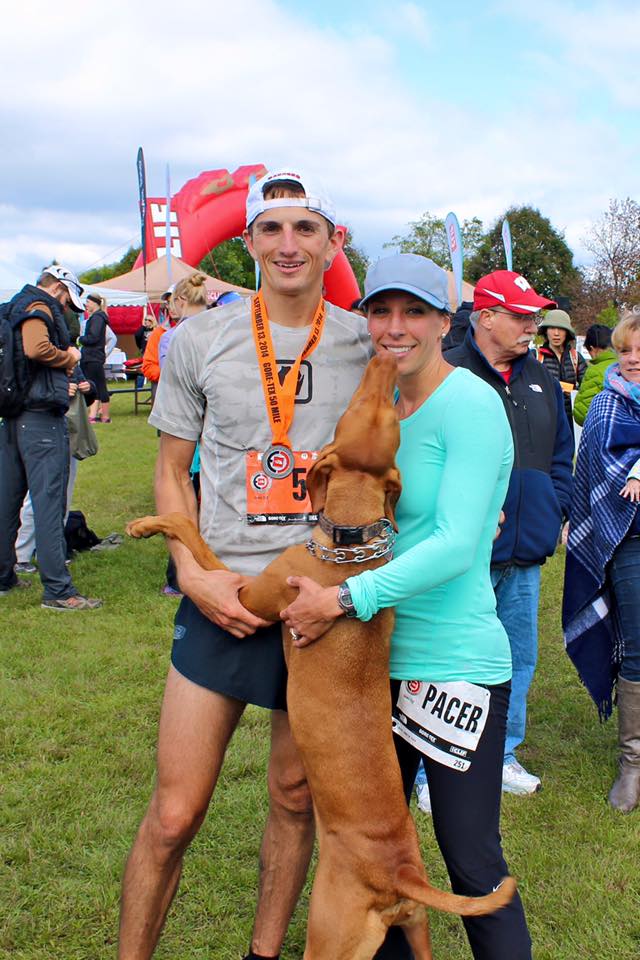 Tyler Sigl with his wife Jessica and dog Dexter post-race.

Tyler Sigl has been a dominant force in Midwest running for nearly a decade. The Wisconsin native won multiple DIII National Championships running for Wisconsin–Platteville, including the prestigious Cross Country title in 2007. Post-collegiately, he ran a 2:17:28 marathon and competed at the 2012 Olympic Marathon Team Trials before quietly entering the ultrarunning world. Sigl’s first two ultramarathon races were at The North Face Endurance Challenge – Wisconsin 50 Mile (TNF ECS – WI) in 2013 and 2014—both dominant wins in 5:38:49 and 5:27:55 respectively. Sigl is fresh off his third consecutive win at the southern Wisconsin race, and he has big goals for the rest of 2015 and beyond.

Quick & Dirty: You just won TNF ECS – WI 50 Mile for the third year in a row. While not as fast as your previous finishes there you still clocked a sub-6-hour victory and bested second-place, west coast ultra-stud Dylan Bowman by over 30 minutes. [Author’s note: Bowman reportedly took a wrong turn and added some mileage.] What are your thoughts on this year’s race; I understand you had some stomach issues this go around?

Tyler Sigl with his wife Jessica and dog Dexter post-race.

Tyler Sigl: With having the U.S. 50 Mile Road Championships three weeks after the TNF ECS – WI, I wanted to take the race a bit conservatively with the goal to win. I started off running nice and relaxed, running with Dylan until the second aid station. Here, Dylan stopped to refuel and I kept on trucking. During the early stages of the race I had a case of “liquid belly” (stomach sounded like it had liquid sloshing around in it).  As the race progressed I got more and more stomach cramps. Around mile 35 I “called dinosaurs” (aka puked my guts out). I walked for a mile or so and started running again. Not too much later the 50K runners started passing me; I latched onto one for a while until I called some more dinosaurs. I met up with another 50K runner at the 45-mile aid station who was struggling as well; we ran together for a while before he dropped off. With the finish line nearing I was able to finish the race off with a couple of decent miles.

All in all it wasn’t the most pleasant race that I’ve run, however I think the stomach issues helped me keep the race conservative, and I still got the victory. It was exciting to pull off my third straight victory at the race, hopefully next year I can make it four. As always the race was well organized with great staff and volunteers.

Q&D: You are still relatively new to ultramarathons, just two years into the transition from a road, track, and cross country background. What lessons have you learned along the way, and where do you think you can improve?

TS: I’ve learned a lot and there is a lot that I have yet to learn when it comes to running ultras. One of the most important lessons that I’ve learned is the importance of fueling. Without proper fueling or trying new fueling can easily destroy a race. Factoring into my fueling technique is the race pace and weather. Hotter days I need more liquid. On harder courses where my pace is 7:00/mile or slower I can take foods like PB&J; anything quicker I can only handle gels and blocks. It’s important to practice fueling in workouts and low-key races so you can get it dialed in and not have any issues on race day.

A past lesson that I’ve learned that ultrarunning continues to reinforce time and time again is that running is 90 percent mental. If you stay mentally strong you can push your body to great feats.

Sigl cruises on a flat, sandy section of trail en route to his victory at the TNF ECS – WI 50 Mile

Q&D: What do you find most appealing about racing ultramarathons?

TS: The most appealing part of ultramarathons is the community. From fellow racers to volunteers, fans and organizers, everyone is super friendly and supportive. There is a sense of family at every race.

TS: I’ve got a busy fall of ultras this year (busy compared to my past anyway). Up next is the U.S. 50 Mile Road Championships at the Fall 50 [in Door County, WI]. My goal is to defend my title, set the course record and, as always, to enjoy the race. After the Fall 50, I’m going out to San Francisco for the TNF ECS – California 50-mile championship race. I’m going to follow that up with some down time and surgery to repair a lingering hernia that I have.

Q&D: What other big ultra goals or focus races are in your future? Any interest in the 100-mile distance?

TS: I’m still trying to compile a race schedule for next year. I’m waiting for all of the U.S. Championship races to be announced in early December. I will admit that I have been searching for a good 100 miler to race next year. One of my goals is to crank out a super fast 50-mile, hopefully sub-5 hours, but I’d be happy with a top-10 all-time North American time [which would require a 5:12:49 or faster]. If anyone is interested in joining me, I’d love the company, and we could figure out which race would work best to try it at!

Tyler Sigl is supported by the Wisconsin Runner Racing Team and USANA Health Sciences. He blogs about his ultrarunning at ultrasigl.blogspot.com.