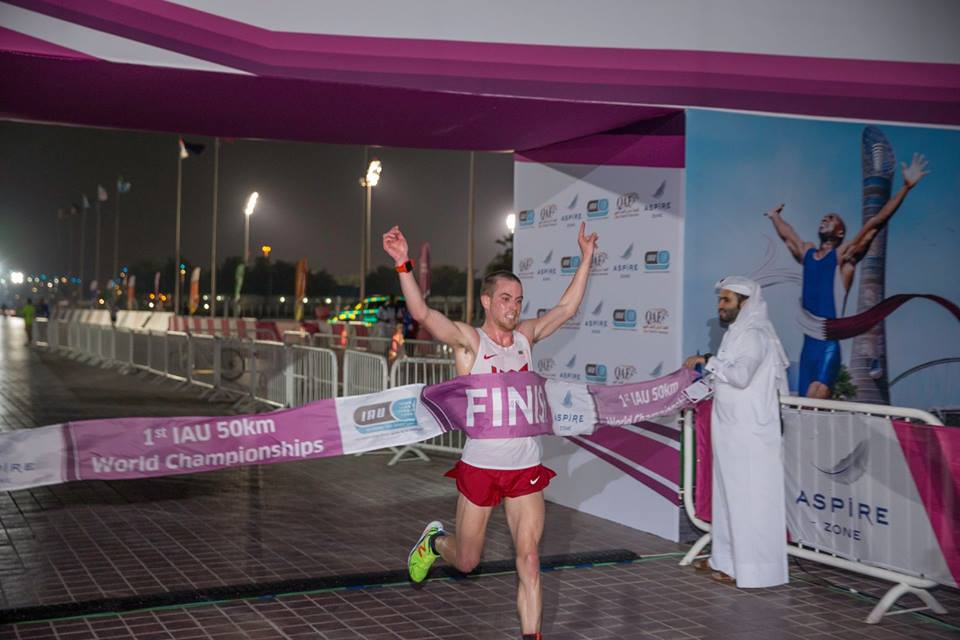 Magliozzi breaks the tape at the 50K World Championships

Over the weekend, Tony Migliozzi, a 26 year old from North Canton, OH, absolutely nailed his debut ultramarathon at the IAU 50K World Championships in Doha, Qatar. Migliozzi won individual gold with a 2:52:08 finishing time, while the Team USA men won team silver. His victory was matched by Camille Herron, also of the US, who ran a 3:20:58 to earn her second world championship of the year. (Read UltraRunning’s recent profile on Herron here.)

While the race was Migliozzi’s 50k debut, he has been running long distances for some time. He competed for Malone University, where he contributed to NAIA National Champion cross country teams his freshman and sophomore years. His junior year, Migliozzi was runner up in the marathon (an event in which college students compete in the NAIA). He holds a 2:17:27 personal best for the marathon and will compete at the Olympic Marathon Team Trials in February 2016.

Magliozzi breaks the tape at the 50K World Championships

Quick & Dirty: Let’s start with the race itself. You ran a 2:52:08 in your 50k debut (5:32/mile) in fairly adverse conditions. Further, you managed to take down the Kenyan team (which had the 2nd, 3rd, and 4th place finishers) and a number of Olympians, leading Team USA to a silver medal to match your individual gold. How did the race play out, and what was most challenging for you?

Tony Migliozzi: Yes, it was my debut at the 50k distance, so it was new territory for me. The race initially went out in a relatively comfortable pace through 15k. Nothing is truly comfortable though when the air is thick, the weather is hot, the surface is unforgiving, and the turns are relentless. The Kenyans picked up the pace at 15k and my teammate Tyler [Andrews] and I matched their speed for that initial move. The pace went again to another gear the next 5k, and I maintained with another Kenyan, at this point letting [the leaders] go. The Kenyan I was running with made many attempts to wear me out via tactics, but I didn’t succumb to any of his surging and swerving. Eventually the Kenyan I was running with lost steam, and by the eighth lap, which was my fastest lap (35k – 40k) I had caught and passed the two top runners. I went past them with all my energy hoping to deter their spirits. The Kenyan stuck with me for a few minutes, but the changing of pace I believe zapped his legs quickly and I was able to finish uncontested for the win. The most challenging part for me was just staying focused after I was gapped, knowing I could reel them in during the important stages of the race.

Q&D: Tell me a bit more about the course and how it affected the race. What about the weather?

TM: The course was not ideal. It was a 5k loop, [run] ten times. It had a slightly longer than half mile hill on the backstretch. It was primarily cobblestone and slick tile. There were also four 180-degree turns on the course that were dangerous and difficult to navigate each loop. There were also water stations before some of the slick tile, which made it slippery [due to spilled water on the tile]. You had to be extra careful! The weather was the least of my concerns even though that was an extremely difficult aspect as well. It was about 80 degrees Fahrenheit at the start with some heavy winds. I always preferred the windy sections though because it felt like it was cooling you off.

Q&D: What were your goals and expectations headed into the race, this being your first ultramarathon?

TM: Initially I was just stoked to have made the US Team. Once the whole team arrived in Doha, we finally sat down and talked strategy at our team leader’s house, Susan Dun. Our goal was to win as a team, and for me, running for something other than myself has always been huge motivation. So I got really amped to lay it all on the line for the USA, but I didn’t know if that would be good for 10th, or 1st, but I wasn’t going to hold anything back. I never took the distance into consideration though; I just wanted to be competitive.

Q&D: You’ve run 2:17 for the marathon twice this year, qualifying you for the Olympic Marathon Team Trials in LA in February. How did those marathons go for you? Did you take to the marathon distance pretty naturally?

TM: A lot of my big marathon cycles have turned into phenomenal races for me. My most recent marathon in Chicago, where I ran my second best time of 2:17:44 was a great run for me. The weather was not ideal, windy and warm, and I finished 15th overall. I think 15th in Chicago is usually good for 2:15:XX in previous years. The marathon has always been my end game. Well, before I realized there are ultras now! Anyways, I have been a high mileage guy since high school [at St. Thomas Aquinas HS In Louisville, OH], where I was trained by a really smart coach, Matt Reneker. I got really lucky to have a coach like him while I was in high school; he coaches collegiate and elite athletes, so he knew how to handle me correctly. I had gotten up to 90 miles a week though in high school. The progression had always been more and more, but never too much at one time. In college I was under the guidance of a two-time Olympic distance coach, Jack Hazen. Through the years I’ve just been really blessed with great coaching. I couldn’t be more thankful. I have always been better with longer races; the longer the race the more confidence I usually have.

Magliozzi tops the podium, flanked by the second and third place Kenyan athletes

Q&D: What is your goal for the Olympic Trials? Did the 50K World Championships affect your training plans much; or conversely, did the impending Trials give you any hesitancy in running the 50K Championships?

TM: My goal for the Trials currently is to be top 20. I’ll have to wait and see how well the recovery and prep goes, but I think that is a realistic goal for me. The 50K actually fit in perfectly with my training! I love a 16-week buildup for a marathon and that’s what the 50K provided. I was able to get in a huge base recently and I think that’s going to pay dividends down the road here for the trials. I would have never turned down the opportunity to run for my country over representing myself at the trials. The USA has provided so much for me, if my chance to give back comes up, I’m going to take it.

Q&D: You’re a pretty young guy (born in 1989), not too far removed from college. Has the 50K Championships piqued your interest for other ultras, or do you envision sticking to the marathon distance for a while?

TM: I’m currently 26 years old, but have been running marathons for years now. I love the 50k distance now too, and I think it suits me perfectly. I am small dude, with a quick cadence: 195 – 200 steps a minute on easy days and 210 – 216 on faster days. [For comparison, a commonly-cited cadence that many top runners have is roughly 180 steps a minute.] I still plan on focusing on both [distances] though. I don’t think there [would be] a huge difference in training for a lot of the ultra races compared to how I go about training for a marathon. The more miles the merrier!

Q&D: Now that you’re back stateside, what was your favorite part of the whole World Championships experience in Doha?

TM: No doubt my favorite part of the trip was meeting my US teammates and US support team. I’m going to have everlasting memories of all the fun things we did and how we all put ourselves on the line come race night. Making meaningful friendships like that for me is priceless.

Tony Migliozzi is supported by BRL Sports Nutrition, Second Sole running store, and New Balance. You can follow his running via his blog or Twitter @tmigliozzi.