By Chris and Emily Edwards

The Trail Verbier St. Bernard is a series of trail races in the mountains surrounding Verbier, Switzerland. The X-Alpine race at 110 kilometers is the longest race with the Grand Traversée being the next longest in the series at about 65 kilometers and just under 14,000 net gain. There are also two shorter races that cover some of the same course as the two longer races. Team relays are also a part of the weekend. The races took place from Friday, July 7 through Sunday morning, July 9.

My wife, Emily, and I decided on the Grand Traversée which started in La Fouly, Switzerland. A well-organized bus system was set up to take runners from Verbier to the start line in La Fouly where the race began at 10 a.m. on Saturday. A crowd of 750 took the start line accompanied by the usual Euro favorite 80s music while helicopters overhead filmed the start. The first two miles of the race is on a lightly paved road with a gentle climb which allows for separation of the runners before hitting the first single track.

Mile three is where the race begins in earnest with a typical Switzerland single-track trail up the Col de Fenêtre. (Typical here means straight up!) This is also the point in the race where the scenery gets unbelievably beautiful. The climb lasts until about mile 6.5 with several thousand feet of gain until cresting the Col and beginning the first technical descent. The second part of the climb leads up to the Grand St. Bernard pass where you find the first aid station at about mile 8 along with a hostel that has been in existence since 1,000 AD! The first aid station has Coke and water and some typical Euro race foods like crackers, bread and cheese and a European electrolyte drink. 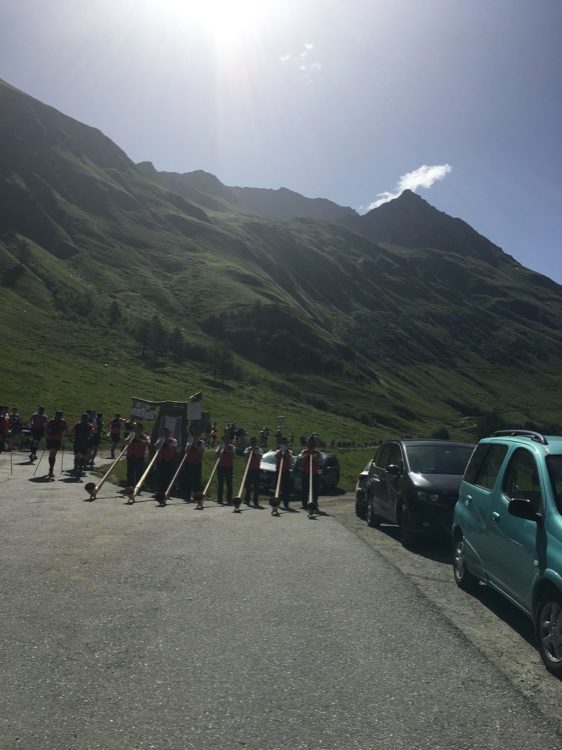 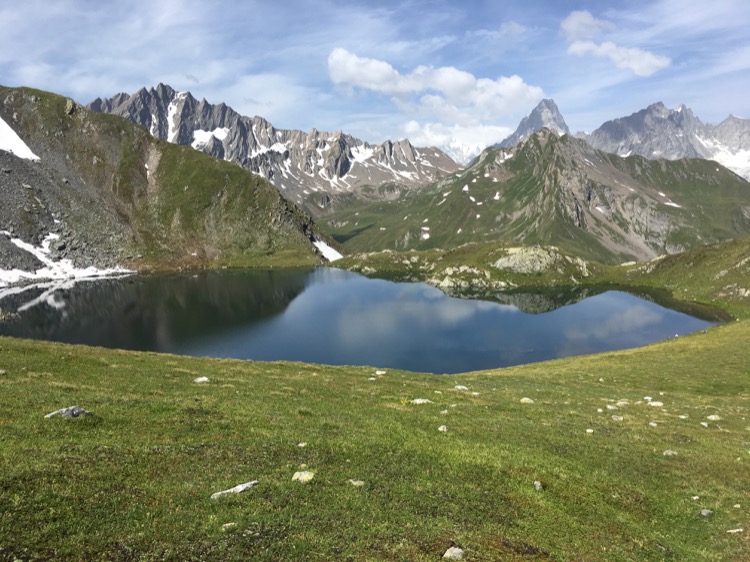 Another significant but shorter climb awaits runners immediately after the aid station. Once across the top of this climb, runners begin the first part of a long descent in to Bourg St. Pierre which is where the second aid station is located about mile 16.5. Beware the first part of this descent, as it is very technical with lots of boulders to hop over or around, all the while not falling off any cliffs. Of course most of the Europeans ran down this section like it was a flat road.

The aid station in Bourg St. Pierre is in a school gym and is very large with lots of food and drink to choose from. Many runners took their time at this aid station to regroup before the next big climb up to Combe de Mille.

The Combe de Mille climb covers miles 17-24 and is thankfully not quite as steep as the other climbs. Don’t be fooled though as there are still several thousand feet of gain! This climb offers spectacular views of the Mt. Blanc Massif with lots of spires and jagged peaks. Another light aid station awaits runners at the top of the Combe and allows for refueling and replenishing supplies for the next section of the race. 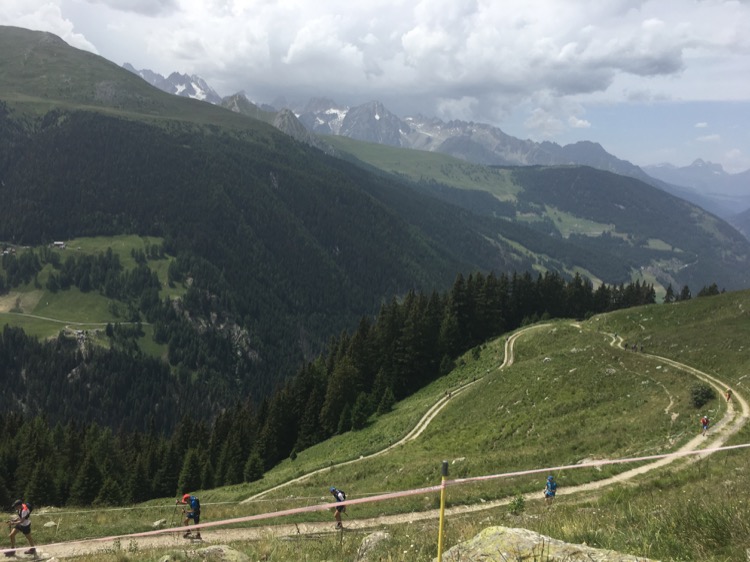 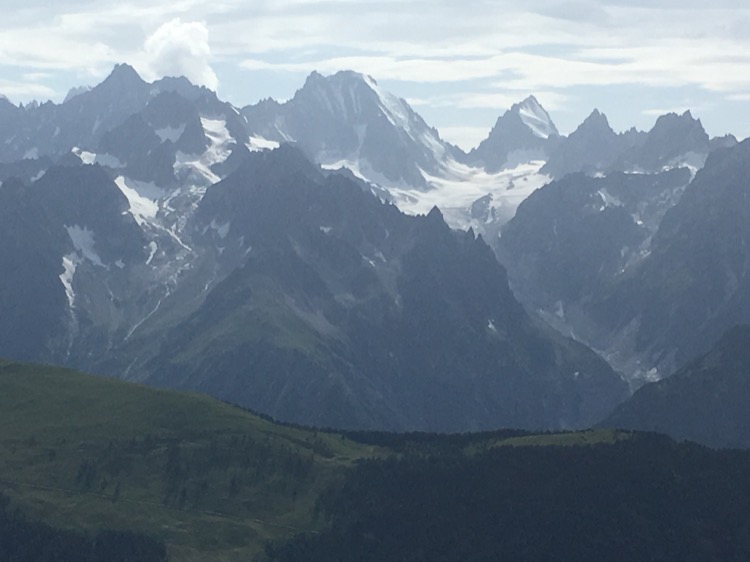 A technical descent awaits runners for the first 3-5 miles of the descent before coming to a nice dirt road where a person who has any quad strength left may want to open up the throttle a bit. However, that would be a mistake as the biggest climb awaits! The next big aid station is at Lourtier about mile 32.5. This is once again a large aid station with plenty of refueling options including some strange looking meats! 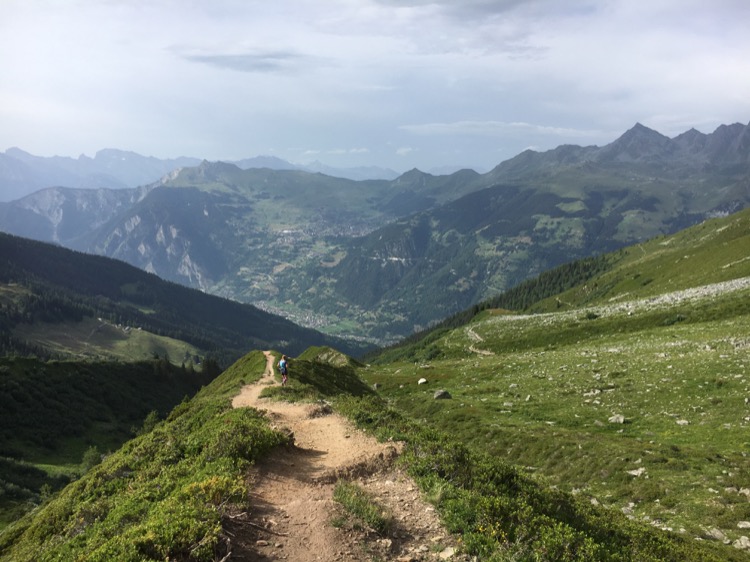 The next part of the race is the climb from Lourtier to the aid station at La Chaux. Not even the pros run this climb, as it is 4,000 feet of gain in a little over three miles! The patient runner will notice many casualties sprawled out on the ground along the edge of the trail in this climb. In this section, it is common for a runner to be able to reach directly in front of themselves and touch the feet of the runner in front of them.

The aid station at La Chaux (mile 36) is next to a ski lift and has the usual fare of drinks and some snacks. Darkness will have fallen upon most runners by this point both figuratively and literally. Headlamps are a part of the required gear list and will be needed for the last descent in to Verbier. 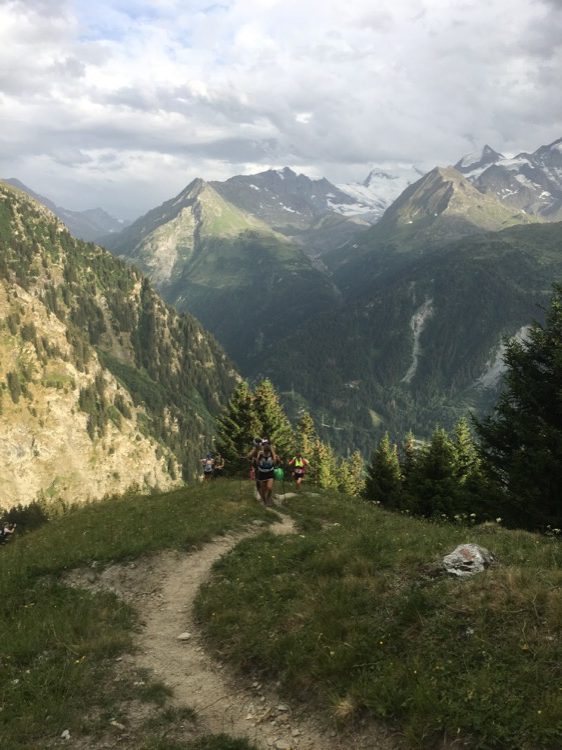 The last bit of the last climb from Lourtier to La Chaux. Photo: Chris and Emily Edwards

The last descent is fairly easy at first on a nice single-track trail. That changes once the trail enters the forest where darkness is absolute and the trail becomes technical once again. A good bright headlamp is critical for this part of the race as physical and mental fatigue have settled in for most runners.

That fatigue will fade somewhat as runners make their way in to town and feel the excitement of the cheering crowds lining the streets of Verbier. A wonderful announcer speaking French, German and English will call out each runner’s name as they cross the finish making every runner feel like they won the race.

For any ultrarunner seeking a well organized and very tough race in beautiful scenery, the Grand Traversée would be an excellent choice. I would rate it as 5/5 on the UltraRunning Magazine elevation profile/surface scale due to steep climbs and technical descents.

Get Your Butt Kicked at Route 66 Six-Hour