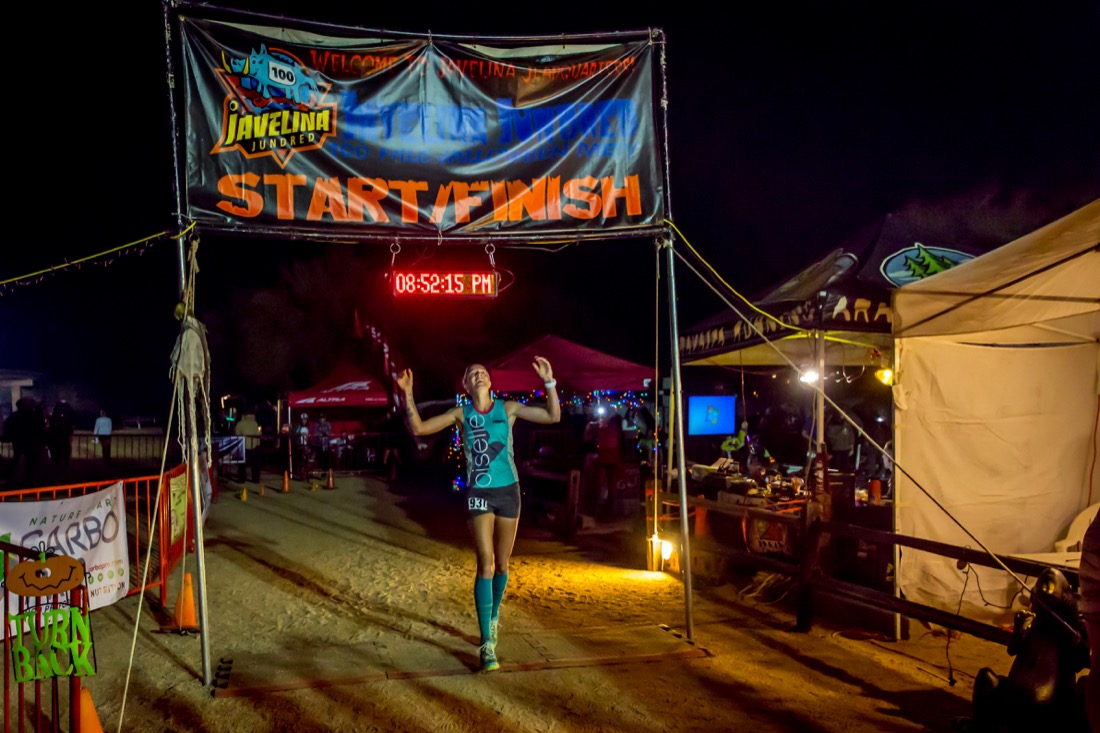 In late 2015, Devon Yanko (née Crosby-Helms) returned to the top of the ultrarunning ranks in style at the Javelina Jundred. She finished the 100-mile race through the desert in a blazing 14:52:06, first woman and second place overall. This was also the third-fastest trail 100 mile ever run by an American woman.

For Yanko—who was returning to high-level racing after several years devoted to starting a business, M.H. Bread & Butter, with husband Nathan Yanko—Javelina was a revelation. However, she insists, “It was not the performance of a lifetime, but instead a breakthrough for me. I understood that I can get to mile 60 [in a 100-mile race] and kill it the last 40 miles—I ran the last 40 [miles] faster than even Paul Giblin did and he almost broke the men’s course record.” (Giblin finished in 13:49:17, less than two minutes behind Hal Koerner’s course record.)

Confidence boosted, Yanko casually decided to enter the lottery for the Western States 100 Mile, knowing that as a first-year lottery entrant her chances for selection were low. She didn’t seriously plan on racing Western States, instead initially building her season plan around the Comrades Marathon and the Leadville 100 Mile. She says she was thinking, “I’ll be totally fine if I don’t get in, but [then not getting in through the lottery] just gnawed at me. I went from ‘I’ll do this eventually,’ to ‘I want to do this now.’”

With international races pending on her schedule in March and April, Yanko knew there was realistically only one shot to punch her ticket—the Sean O’Brien 100K in early February. Yanko thought, “I’m all in—I’m going to Sean O’Brien with one aim, to get that Golden Ticket, and I’m going to make it happen.” Despite very little specific training for the race, she bested a tough Amelia Boone with an effort that also placed her third overall.

Struggling mentally in the race’s middle miles, Yanko says she channeled her Javelina performance. She recalled how well she ran the last 40 miles of that race after having a rough middle 30 miles in the heat of the day. Since she was able to turn things around so dramatically there, Yanko reasoned, “I just kept the faith. At mile 40 [of Sean O’Brien,] I realized, my body is fine; and having that realization, I just crushed it the last 22 miles.”

When Yanko describes things not going to plan, she often use the phrase “when things went sideways”—for instance when falling and hitting her head on a rock in Scotland’s Highland Fling, which forced a DNF, or when her March racing plans were taken out by a car accident. It may not be intentional, but the characterization of these things as lateral moves, as opposed to steps backward, is indicative of Yanko’s overall approach. Over the course of a decade-long ultrarunning career—punctuated by world championships appearances, a U.S. Olympic Marathon Trials run (2:38:55!), and countless ultramarathon podium finishes—Yanko has become adaptable. She takes the unexpected as a simple re-route onto a new path, rarely deterred.

It’s taken some time, but in coach Ian Torrence she’s found the right person to guide her career through these “sideways” moves. Yanko has had a coach of some sort since 2007, and she’s been working with Torrence since early 2013 (with a brief switch to Jason Koop in 2015 before returning to Torrence). She says, “Ian understands the balance for me, which is that sometimes I want to bugger off and go do what I want.” Yanko describes herself as process driven, and not Type A; she sometimes needs to be held back when she’s in great shape. Most important about Torrence, Yanko says, is that “he really gets me; the last couple months in particular, we’ve been really in step.”

As Yanko looks forward to Western States, Torrence’s experience and ability to temper her more aggressive tendencies are just the right fit. “My fitness this year is in a really good place,” she says, but “I know I really have to run my race [at Western States]. With 100 miles, everybody’s going to get there in a different way. I don’t want to rest on my laurels [early in the race], but at the same time I don’t need to [stick with everyone] either. There will come a point when [they] come back to me.”

With her speed and downhill ability—and a newfound confidence at the 100-mile distance—Yanko knows that Western States is her kind of course. She says, “The last 40 miles [of Western States have] a lot of good downhill and a lot of really runnable [terrain], and that’s why my curiosity about going back—after my experience at Javelina—is so strong.” (Yanko started Western States in 2010, but dropped out at the Michigan Bluff aid station with kidney problems.) She believes, “If I can get to mile 60 [at Western States] running my race and not being dumb —my motto is ‘don’t be dumb’—I could do really well in those last 40 miles.”

“The other thing I learned at Javelina that has [become] one of my mantras is: work the problem,” Yanko says. “In ultras, whatever [goes wrong] usually can be solved. You just have to take the mentality, ‘Hmm, here is a problem; this is a puzzle, let me figure it out,’ as opposed to, ‘Oh no, I’m throwing up, my life is over,” Yanko laughs. Reiterating, she concludes, “It’s knowing that most issues that come up don’t end your day. [You need to] have the patience to, for instance, back off the pace, or take in more calories, or sit down for a few minutes (I sat down at Javelina for like 10 minutes!)…focusing on what I can control, that’s the big thing for me.” That, and of course, don’t be dumb.