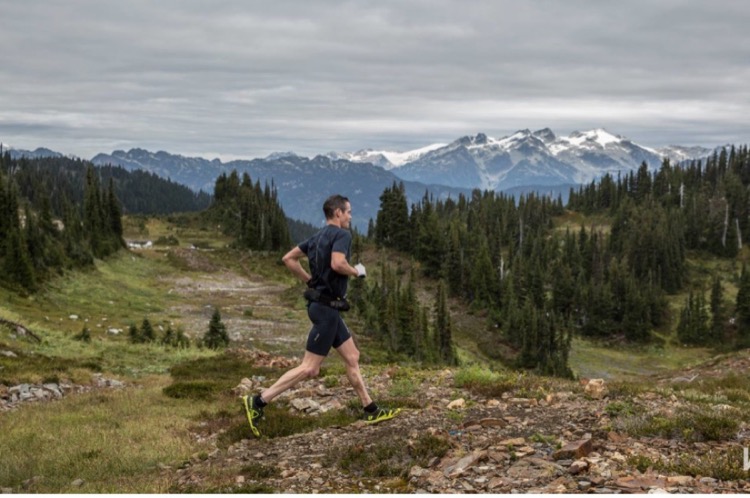 Most ultra runners love the alpine. There is a primal quality to the exposed rocks, struggling plants and tenacious lichen. Maybe it is the muted colours of the alpine, maybe the closer contact to the elements, maybe the challenge of ascending into the landscape. No matter, the whole package is seductive in a northern, remote way that feels dry and cold, yet utterly refreshing. 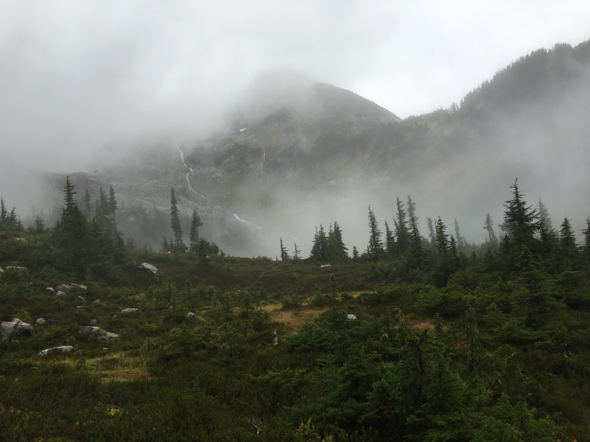 Whistler Alpine Meadows from a training run in 2016.

Whistler Alpine Meadows 55km (also available in a 26km or 12km package with a 100km for 2018) provides all of those sensual, almost spiritual experiences in the eponymous alpine above Whistler, BC. 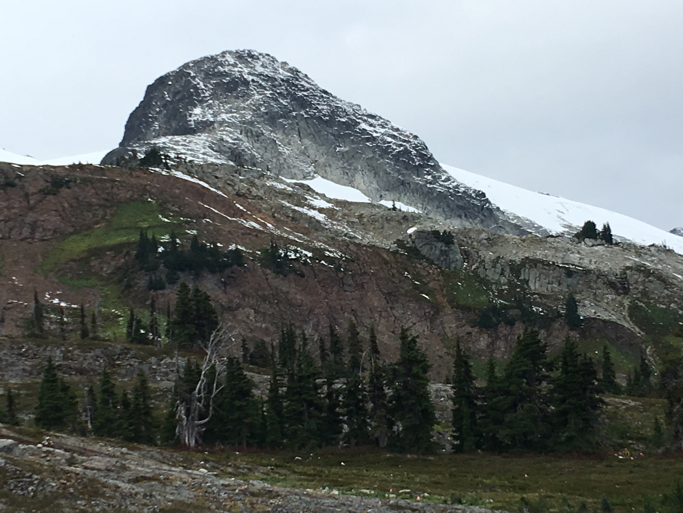 First glimpses of the alpine and glaciers.

If you love to climb and descend, WAM is a feast. Training for the course entails lots of steep climbs, many of which might be hiking only. I would argue that even the elites are hiking some of the really steep terrain, though RD Gary Robbins might have evidence to the contrary. With 11,000 ft (3,400 m) of gain, there is opportunity to run, scramble and hike. 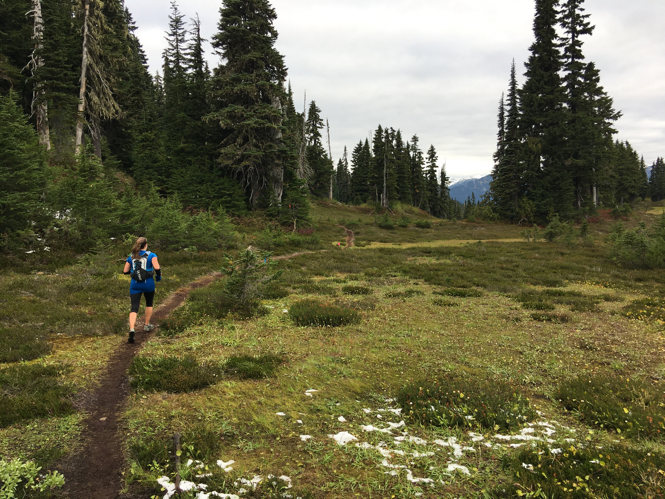 Easy running in the eponymous Meadows.

For all the hype about the vertical gain in this race (it would easily qualify as a Skyrunning event and has as much gain as the 50k at Broken Arrow), there are only two big climbs. The first one starts after 4km on paved bike trails in Whistler. Suddenly the grade goes from 0 to 15%+. That is a shock to the system at 6 a.m. And it just keeps going up on rocky, sometimes rooty trails for 12km.

Aid stations 2 and 5 are nestled beside a glacier on a lake. Actually, they should be referred to as the tentative aid stations because the supplies are heli-dropped in – weather depending. Too steep for llamas? Not sure, but that aid station is a sight for tired eyes, especially on the return journey through the high alpine.

Nobody enters a race with 323 feet of vertical gain per mile (Western States has 180 feet of gain/mile; UTMB has 297) expecting a fast pace. But runners are really hustling on the steeps at the beginning. At the beginning is the operative phrase because the difficult thing about this race is closing on the final 25km. 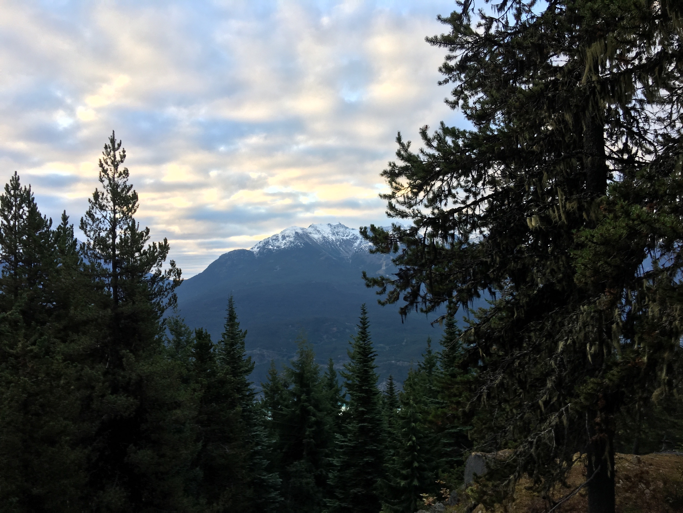 View from halfway up the first climb. Note how far down Whistler Village is below. 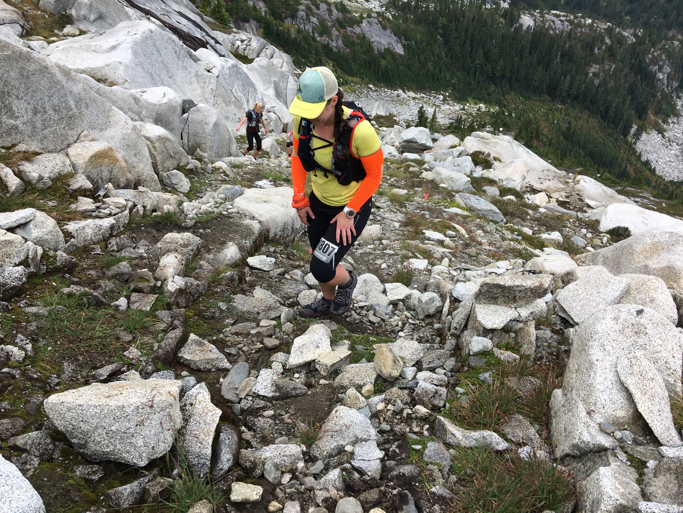 What’s not to love?

Mike Murphy, a local Squamish runner and co-owner of Capra – a trail running shop – negative-split the race and won. Which is a real feat, given that the 5km climb out of the half-way aid station is very steep.

Jared Campbell also ran the race and placed 14th, which is a good indication of the difficulty of this course. In fairness, he had had a pretty intense summer of running, including Nolan’s 14 with RD Gary Robbins. The women’s 55km race was won by Jeanette Hazlett, who was 11th overall.

The 25km race was won by Ellie Greenwood (women’s) and Tom Nelson (men’s). 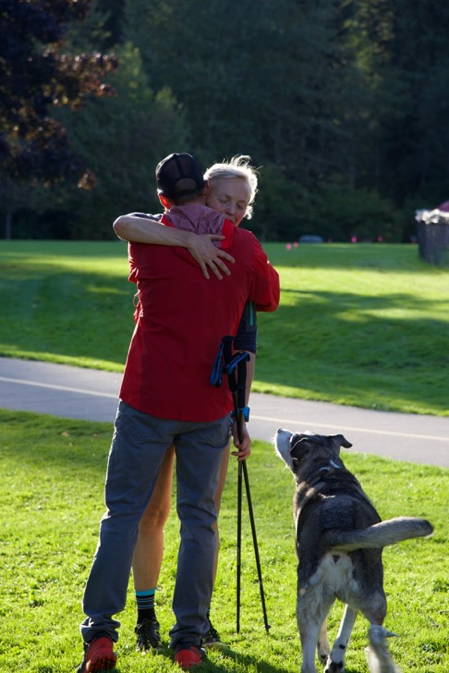 Finally, don’t necessarily eschew the early start (which gives you 12.5 hours instead of 12 hours until cutoff). A friend of ours put it like this: I ran my first ultra in 6.5 hours and my second (WAM 55km) in 11 hours. Say no more.