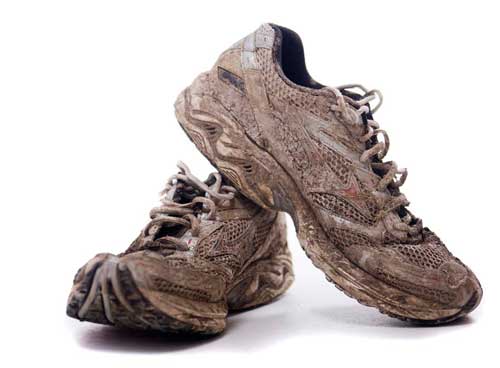 When to Dump Your Shoes

Buying just the right running shoes can be tricky. Figuring out when to get rid of them can be difficult as well. Sometimes a running slump and loss of motivation can be cured by getting out of tired and f lat shoes.

In years past, the uppers of running shoes would fray and tatter, and the bottom tread would show obvious wear at about the same time the critical midsole cushioning would begin to seriously fail. Shoes would look done for at about the same time they really were done for. But nowadays, with the much-improved materials that go into good running shoes, the uppers almost never wear out, and the tread is more durable as well. Shoes that still look passable may be ready for the trash heap.

The runner is left with two options: either track the shoe’s mileage or look for some of the more subtle signs that it’s past its prime. Industry representatives generally put the lifespan of a shoe between 400 and 600 miles. The mileage you personally can expect to get, however, will vary depending on factors such as your weight, the surface you run on, your foot strike tendencies, whether you switch off pairs from one run to another and of course the resilience of the materials and design.

To keep track of your mileage precisely, you can record what footwear you use in your running log. Alternatively, you can just note the date when a shoe went into service and then estimate the miles run based on your weekly average mileage. I like to write the date I started wearing the shoe right on the side of the sole, which has the advantage of distinguishing one pair from another if they happen to get jumbled together in the closet.

New shoes can look amazingly like old ones after just a couple of muddy trail runs.

Knowing about how far shoes have gone can be paired with the more subtle signs of wear to help you make that final decision to discard them. Many runners go with the “achy knee” test; that is, they wear a shoe until they start detecting minor aches and pains in their knees, ankles or feet. Presumably the pain is the result of the shoes having lost their protective cushioning property due to permanently compressed, brokendown midsoles. Shot midsoles might also be signaled by a complete loss of the initial cushy feel. If you have a new pair of the same model, put on the new ones and see if the contrast in the cushioning is dramatic.

Despite the better materials used in today’s shoes, appearances can help you decide to deep-six your old running buddies. Wrinkles and creases in the midsole, especially under the heel or ball of the foot area can signal significant wear. Obvious wear on the bottom of the sole or a lean to the shoe when viewed from the back are often signs that the midsole is excessively worn as well. Deteriorating uppers can also signal that shoes are past their prime.

When all is said and done, though, we’re all individuals as far as wear is concerned. Thru hiker Brian Robinson, who hiked the Appalachian Trail, the Continental Divide Trail and the Pacific Crest Trail all in one season, reported one pair of shoes lasting a stunning 1,800 miles, but on the other end of the scale, shoe reps have seen shoes with only a couple hundred miles on them come in totally trashed.

With that kind of variation and the many factors that affect the rate a shoe breaks down, no one formula fits all. But all runners can benefit from paying attention to the condition of their shoes. The goal is to enjoy a lifetime of running. The first step is always having proper shoes.