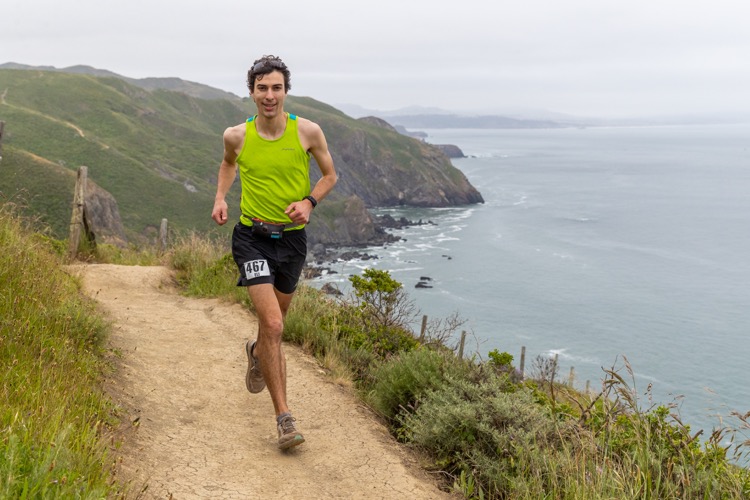 Eli White smiles on his way to a second-place finish at the 2019 Miwok 100k. Photo: Glenn Tachiyama

What’s Up in Ultra This Weekend – May 7

We’ve hit a bit of a mini-milestone this first week of May with the 30th consecutive What’s Up in Ultra. It coincides nicely with our UltraRunning Calendar which includes 42 different races across the US this weekend.

Kicking things off with a distance that is a bit of an anomaly in the sport of ultrarunning, but with a race that has persisted for over four decades, is the 44th Annual Strolling Jim™ 40-miler in Wartrace, Tennessee, on Saturday, May 7 at 7 a.m.  The 2021 #5 UltraRunner of the Year Harvey Lewis III from Cincinnati, Ohio, is on the start list, as well as Dink Taylor of Huntsville, Alabama, who’s competed in an astounding 35 editions of the race. David Jones from Murfreesboro, Tennessee, is also expected at the start and has completed 33 Strolling Jim races. On the women’s side, look for Jenna Henry of Webb City, Missouri, to make a strong debut, third-place finisher from the 2021 race, Kat Coffey of Petersburg, Tennessee, to go for the win and Cathy Downes of Evansville, Indiana, who has two top-ten finishes included in her previous five finishes at Strolling Jim to also lead the charge. The race director is our very own UR contributor Gary “Lazarus Lake” Cantrell of the infamous Barkley Marathons, which I covered in the May/June issue that just came out this week.

We stroll swiftly across the country to the edge of the content and the 25th Miwok 100k in Stinson Beach, California, on Saturday. Featuring the pristine trails of Mount Tamalpais, the Marin Headlands, views of the Pacific Ocean and the San Francisco Bay Area, and boasting nearly 12,000 feet of elevation gain, this is one serious 62-miler.

The front of the field should be competitive this year, too. Your 2022 FOURmidable 50k winner Madison Hart from Boulder, Colorado, UR columnist Sarah Lavender Smith of Telluride, Colorado, Krissy Moehl from Bellingham, Washington, and Bree Lambert-Sanders of San Jose, California, will undoubtedly mix it up at the front of the field. For the gentleman, Dylan Bowman from Portland, Oregon, the 2019 Lake Sonoma champion Sébastien Spehler of Masevaux, France, and the 2021 Lake Sonoma 100k runner-up Kristian Howell of Santa Barbara, California, will lead the charge. Another regular UR columnist and podcast guest, Dean Karnazes, is also slated to start at 5 a.m.

Additional events on our UltraRunning Calendar include the McDonald Forest 50k in Corvallis, Oregon, the Collegiate Peaks Trail Run 50-miler in Buena Vista, Colorado, the Quad Rock 50-miler in Fort Collins, Colorado, the Big A 50k in York, Maine, and the Mind the Ducks 12-hour in Webster, New York, all on Saturday, May 7 as well.

Where are you racing this weekend? Be sure to drop a note in the comments so everyone can follow along with what’s up in ultra in your local community.

This weekend is the 25th Anniversary of the Dawn To Dusk To Dawn Track Ultras in Sharon Hill, PA. Events being run are 50K, 12Hr, and 24Hr

That’s a great milestone, Bill. Are you running one of the events? https://calendar.ultrarunning.com/event/dawn-to-dusk-to-dawn-track-ultras

I am “running” in the McDonald Forest 50k on Saturday… lots and lots of climbing in rainy weather. it will be tough, but more so as this is my first ultra race since HURT 2020 and just days before the pandemic.
the Mac 50k is a great mostly trail run on beautiful terrain just outside of Corvallis OR.

Have fun out there Peter, I’ve always wanted to make it out to Corvallis for this…hopefully next year!

Allison Mercer is running Strolling Jim! My bet’s on that speedy rockstar.

Same Allison that has a slew of FKTs? She wasn’t on my radar, thanks for the heads up! https://fastestknowntime.com/athlete/allison-mercer

Thanks Maddog! It’s me and I ran the 3rd fastest time, finishing second to Camille Herron, not bad company 🙂

Nice work out there Allison!

Tom Rogozinski blast from the past, 6th at Cocodona (3rd 1992 Trans America Footrace).

What a race, Tom ran so smart.

Like riding a bike, you never forget how to cross a desert (Mojave or Sonoran) on foot, I guess!