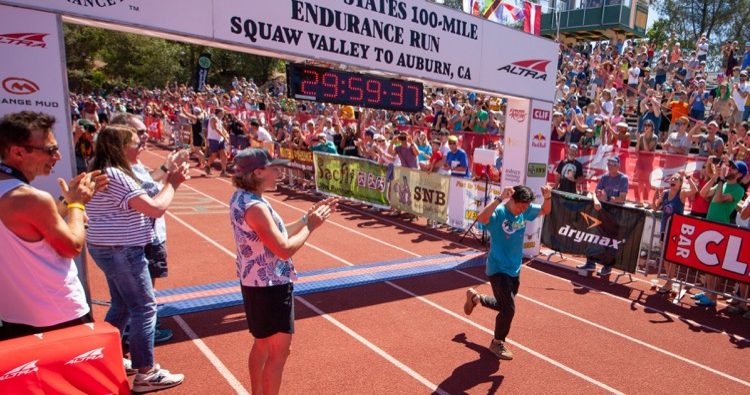 The final finisher of this year's Western States 100, Lane Shimonishi, crosses the finish with just 22 seconds to spare until the final cutoff. Photo: Jesse Ellis

When my son, Kyle, proudly grasped his diploma and pumped his fist in triumph during his high school graduation this past June, I cheered loudly while infused with feelings of relief, happiness and love. As odd as it might be to think of ultrarunning during that emotional milestone as a parent, the “golden hour” of the Western States finish line flashed through my mind.

During that final hour when the last runners reach the finish just under the event’s 30-hour limit, spectators go wild with support for the back-of-the-packers, recognizing that a longer time on the course involves more struggle and effort, and thus their finish feels more impressive.

It’s not the first time I’ve connected parenting to ultrarunning. Lessons learned and traits developed as an ultrarunner have helped me work through real life daunting projects and, as a parent, enabled me to support my son with patience and empathy.

High school didn’t come easily for Kyle, who felt merely average in a cohort of academically accelerated peers, but he persevered with gritty determination and now is heading to college with confidence. On nights when he’d talk to his dad and me in a voice quavering with frustration and stress, saying he wanted to transfer to an easier school, I found myself talking to him as if I were a pacer coaxing a runner through the final 20 miles of a 100-miler. I’d repeat many of the things I’d say on the trail to keep the runner from dropping out – the same things I tell myself when I feel overwhelmed and am close to giving up on a monumental task.

“Break it down.” I’d advise my son to focus only on the week ahead, not the months to come. Do the best you can day by day, one assignment at a time. In ultras, we remind ourselves to take it aid station by aid station. If you’re suffering at mile 20 of a 50-miler, focus only on the 6 miles to the next aid station, not the full 30 that remain.

“Maybe you just need to eat something and rest a little.” In real life and in ultras, sometimes we need to hit the pause button and engage in self-care to work through a bonk. I’d tell my son that the next day would feel more manageable if he got a good night’s sleep and ate some breakfast, just as I’ll tell myself I run better in the later miles if I take extra time at an aid station to eat and rest.

“Run your own race, go your own pace.” So often I’d urge my son to stop comparing himself to his peers. I truly didn’t care how he ranked in his class; I only cared that he strived to do his personal best. As a coach, I remind my clients that they can’t control who shows up on race day, and they risk a blowup if they push too hard to keep up with others too early in the race.

“Use your crew.” I’d urge my son to ask his friends and teachers for help because he shouldn’t struggle solo, and the support of others can help him get unstuck. In ultras, we value self-reliance, but camaraderie can be the most empowering and fulfilling aspect of the event. Crew members and aid station volunteers stand ready to help you through a rough patch, but you have to admit and express your need for assistance first.

“Leverage your strengths.” My son hit his stride during his senior year, both in academics and extracurricular activities, in large part by building self-confidence through leadership opportunities and public speaking. His weaknesses in reading and writing mattered less because he did so well leading groups and communicating orally. I tell my clients to stop beating themselves up about how they “suck” at some aspect of their trail running, and instead, celebrate and leverage what they’re good at, be it uphill power-hiking, downhill technical terrain or a fast kick to pass others near the finish.

“Keep going, you’ll get there.” It’s so easy to lose faith that forward progress, no matter how slow and torturous, still amounts to progress and eventually, will get the job done. I’d tell Kyle that any bit of work on his college apps would move his application process forward. And on days when writing my book felt utterly impossible, I’d tell myself that a few paragraphs each day would eventually complete the manuscript. In ultras, we put one foot in front of the other, and it’s useful to remember that the monumental challenge really boils down to this simple fact.