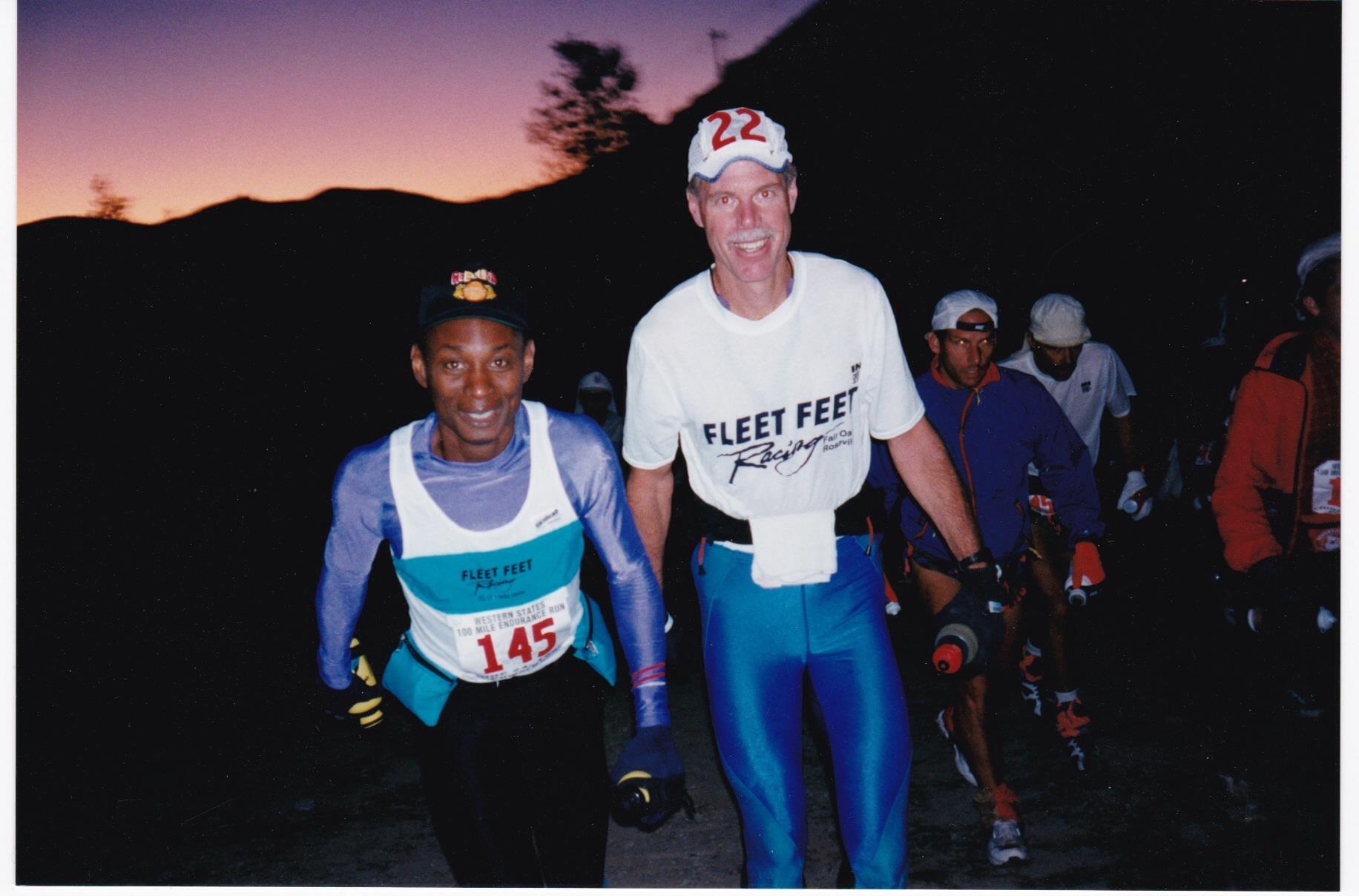 Errol and Tropical John at the start of the 1994 Western States.

The Old Guard And The New

By now it’s old news to many about that fateful day in August of 1974 when Gordy Ainsleigh’s horse wound up lame and he decided to take to the trails on foot against the mounted riders of the Tevis Cup 100 in California’s Sierras. He completed the 100-mile trail course with nary any fuel or fancy hydration in 23 hours and 42 minutes, giving rise to the sport that we now know as trail ultrarunning and the Western States 100. At the time Gordy was running the Sierras I was taking to road running and marathoning with a vengeance. Six years later I would embark on my first trail race, never to really return to road running.

There was no real science of trail running back then. The sport was in its infancy, even in the mid-’80s most everything was trial and error. ERG and Gator Ade were just coming into existence as electrolyte replacements for football players, and those in conjunction with Coke, Seven-Up and Ginger ale were the sports drinks. Snickers, Pay Day and Milky Way bars were the energy bars of the time. It was Gordy who gave me my first Snickers bar to stave off bonking during a run at Western States in the ’80s. Aunt Jemima syrup bottles and various rubbing alcohol bottles or others with an ergonomic shape were our “hand-helds” for many years.

No one could even spell hydration pack back then and vests were something you wore with a suit or as part of hunting attire. LED flashlights light up the trails at night now like a major freeway, but back then it was the conventional home flashlight that guided us through the dark. Now GPS’s determine precise location and how far, high or fast one has run, plus heart rate data and calories consumed (I can’t wait for the models that measure fat vs carb burning…) and they’re on every other wrist. All we had were sun dials (ok, that’s a bit of hyperbole).

But back then you didn’t know about GPS unless you worked for NASA, and you only had a cell phone if your name was Cannon, Kojack or Mannix (the older readers know who they were), or if you worked for the police, FBI or CIA.

There were five 100-mile races every year and when the numbers hit 15 or so we thought that was a cornucopia of events. Most runners across the country knew one another by name, as well as their times run at different distances. If you didn’t run the event held in your area you paced or crewed someone who was, or you worked the event, that’s the way it was. Ultrarunning has become a business of sorts now with some directors putting on multiple events every year. And there are gateway event holders, like the North Face Endurance Challenge who help newbies transition from road to trails, and up to the ultra distances.

Errol and Tropical John at the start of the 1994 Western States.

Now there are over one hundred 100-mile events that one can choose from and if you don’t sign up the day that some of these events come online, you can’t get into that particular race, not to even mention the proliferation of “lotteries.” But now at least there’s always an ultra that one can run on any other weekend, that’s both the good and the bad of it. In days of yore you sent a self-addressed stamped envelope with your request for entry to the race director and waited for acceptance and your results came the same way – “snail mail” as they now call it.

During the running boom of the ’70s and eighties some of us transitioning from marathoning on the roads to trail ultras carried over our flair, such as it was. Three-inch-inseam split shorts, can you dig it? But back then many of the pioneers were still wearing cut off blue jeans, corduroy, field pants or nylon gym shorts from the ’60s and ’70s, replete with white dress shirts with holes cut into them to facilitate venting and air flow. No micro fiber shorts or shirts, no compression shorts, socks or tops, no running vests, skirts (ok, I’ll admit that’s a real improvement in the sport) or lycra-like yoga outfits (ditto.)

The sport and the science of ultrarunning were in the developing stages and while most felt the sport would survive, none were certain and we never envisioned it blossoming the way that it has. We were characterized as the lunatic fringe by some in the media and when the sport or its participants received press outside of UltraRunning magazine or the occasional Runner’s World article it was about someone or some group who was at the extreme end of the ultrarunning community. The Divine Madness Ultrarunning group, based in Colorado at the time, was thought of by some as a cult group, and Bare Foot Ted McDonald was the only chronicled shoeless ultrarunner in the ’80s – his approach was viewed as crazy, not a craze, as has been the case with the Taramahura-inspired barefoot and minimalist shoe fad.

We had some intelligent and favorable accounts of Western States 100 through Wide World of Sports, and a sensible but rare article would crop up in print in the New York Times, but little else. In this new millennium you can find articles on a frequent basis about the sport or it’s participants in the local paper (to the extent those still exist…). Ultrarunners are on talk shows and television commercials, there’s a plethora of ultrarunning books and medical studies on a wide range of things related to the sport are conducted and debated regularly. Not to mention the ultrarunning websites and blogs.

One of the things I’ve always relished about the sport of ultrarunning is the accepting nature of those associated with it, and that is something that hasn’t changed. One’s sexual proclivity, ethnicity, gender, social, political, financial or educational status has never been a barrier, nor a stepping stone towards acceptance in ultrarunning. Ultrarunning tends to strip all of that away and reveal the true essence of a person’s character, and for that I love it.

But this old codger does have some questions for the newbies – shoes range from Hoka’s to minimalist and everything in between – seemingly contradictory footwear technologies all claiming to be the “only way,” what gives? Some runners wear tutus, capes and court jester caps in events, when did those become part of trail running apparel? I thought there were other venues for super-heroes and ballerinas, inquiring old minds want to know. When did GU, Cliff bar and Vespa wrappers become part of the trail flora and fauna, and does anyone except old-schoolers or runners fulfilling volunteer “requirements” work aid stations?

Change comes to everything in life and the old have to accept and make way for the new but there’s something to be said for the pioneers of the sport and the trails that they blazed and traditions set. One thing remains consistent in trail running and that is the challenge associated with it and the beauty and serenity of many of the locations where events are held. The sharing and interaction with nature still enthralls most and the opportunity to disengage from the monotony and grind of the everyday world are still it’s greatest appeal. There’s room for everyone in this extreme endeavor and there’s no end in sight. Its a sport where the back-of-thepackers get to rub elbows with the Ellie Greenwoods and Sage Canadays. It’s a beautiful and special sport, one worth ranting about in this and forthcoming articles. Until then, enjoy the trails and stay tuned.

That’s my story and I’m sticking to it.

Errol "Rocket" Jones is a veteran ultrarunner of 34 years, having participated in over 200 ultras dating back to 1981. Jones completed ultrarunning’s Grand Slam in 1998 and is a 3-time finisher of Badwater. He is also Co-Race Director of the Bear 100 and the Quad Dipsea, and serves as indentured servant at the Miwok and Lake Sonoma ultras.

“One of the things I’ve always relished about the sport of ultrarunning is the accepting nature of those associated with it, and that is something that hasn’t changed. One’s sexual proclivity, ethnicity, gender, social, political, financial or educational status has never been a barrier, nor a stepping stone towards acceptance in ultrarunning.”

Is this true? Are there any openly gay ultrarunners? Why are there so few brown faces on start lines? (Please don’t take these questions as inflammatory. I ask only because I really wonder about these things.)

Nice article Errol. I too find the nature of the ultra-scene accepting, mostly because I don’t ask or tell about proclivities and ideologies. If you keep the conversations to race conditions, weather, or blisters, you don’t get judged. Keep it light and friendly and no feelings get hurt.

I do feel the littering runners should be hunted down, so they could meet with a terrible tragedy. The world can do without them.
The nutrition nazis, that take every opportunity to hound about Vegan-ism, should leave their proselyting and scorn at home.

And the wearers of cartoonish embellishments should stick to runs at Disney Parks.
I do like the cushy shoes, and hope they stick around.

What I love about ultra running is that everyone is warm and accepting and there is so much love. Aren’t we all out there because we love nature, running and our fellow humans? Who cares what somebody runs in or how they dress. How does that effect you? They are dressing in what makes them happy not to make fun of the sport. Isn’t that what it’s all about…being happy?