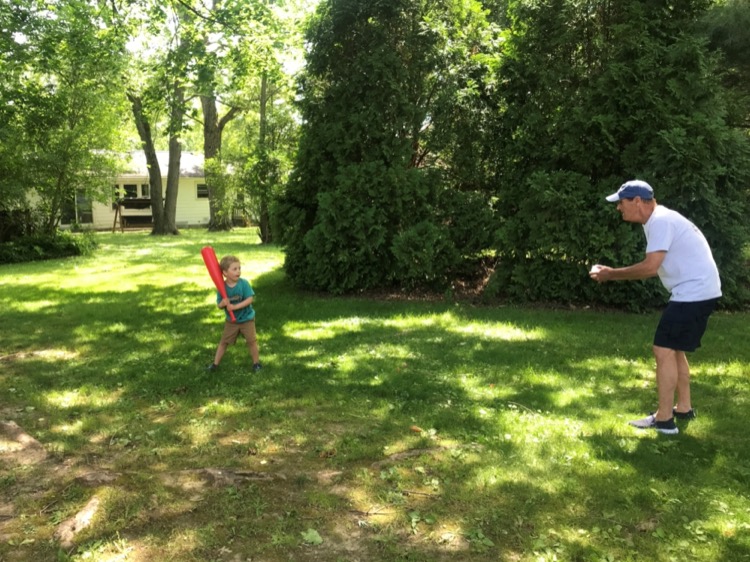 The author's father plays with his grandson. Photo: Drew Dinan.

Something to Think About

As I get older, ultramarathons are becoming more mentally challenging. Perhaps I’m wise to the suffering I’m going to be putting my body and mind through on race day, no longer naive to the toll the race will take on me. I’m all too familiar with bonks, dead legs and being so stiff after finishing that I can barely hobble to my car. The race excitement, while still there, comes with a little more trepidation than in years past. Regardless, I keep signing up for races and setting new goals. But it sometimes becomes harder to find the inner strength to push on when things get tough. I need mental tricks to keep pressing forward when my legs and brain are telling me to call it day.

Last month, I ran a 100k outside of San Diego. Worried that I might give in to the voices telling me it was time to walk (or worse, stop altogether) I tried a new tactic to stay positive from the first step. I committed that every two miles I would think about one thing I was truly thankful for. The only rule was that it couldn’t have anything to do with running. For example, I couldn’t be thankful for being halfway done or getting a big climb out of the way. I wanted to focus on the people and blessings that gave me the opportunity to be out there in the first place. 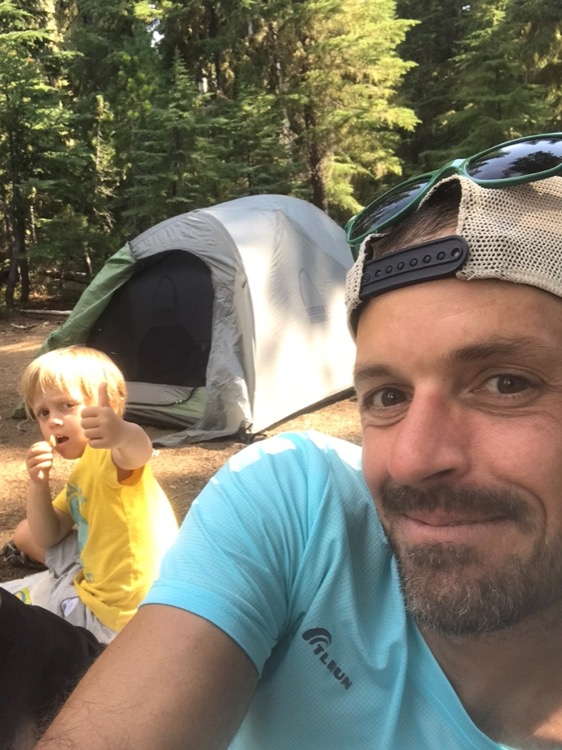 The author’s son gives a thumbs up to camping. Photo: Drew Dinan

Looking back, I can honestly say this “tactic” was more powerful than I had intended. From a race perspective, it was a much-needed distraction. It broke down the distance into manageable segments. I would look forward to spending several minutes every two miles thinking about a different thing I was thankful for. It took my mind off the heat and exhaustion I experienced for most of the day.

But most importantly, it reminded me of the sacrifices of others which allow me to do the things I’m passionate about. Running ultras involves time away from our families. We have training runs where someone needs to stay home and watch the kids. There are race and travel expenses that could be used for paying bills instead. Finishing a race also requires sacrifices from others, not just ourselves. This includes the volunteers and crews who help keep us on course in so many ways.

I also spent a lot of that race being thankful for friends and family who have overcome obstacles much more difficult than completing an ultra. I thought about loved ones who served in the military or battled cancer and other serious illnesses. All of it helped remind me that what I was doing, while uncomfortable and difficult, in no way rivaled their challenges. I had no right to pout or feel sorry for myself when things started to hurt. I chose to be out there. I owed it to them to keep going.

There is a lot of time to think during ultramarathons. We have miles where we run with pacers or chat with fellow runners, but much of our running is spent alone in our own heads. And that place can get dark when we’re sore, exhausted or simply not having the day we envisioned. The key to a successful race, whether competing for a podium or trying to finish (injuries aside), often comes from not allowing negative thoughts to outweigh the positive ones.

For me, I realized the best way to keep the doubts from creeping in was to think about the things most important in my life off the trails, rather than stressing too much about what was happening on them. Too often, I dreaded the difficulties of the race, fixated on how many miles remained and wondered how I’d cover them when all along, I should have focused on just how lucky I was to be out there to begin with—and for all the people who made that possible.