Running Up for Air : An Ultra With a Purpose Inspires a Series of Events

I kicked my shoe into a snowy slope to gain traction, planted both trekking poles in front of my body for leverage, then laboriously took a single step and paused to catch my breath. I was on my fifth trek to the summit of Grandeur Peak for the Running Up for Air ultra in Salt Lake City on February 22.

Some of the runners were heading up for their tenth or eleventh summit, because they were in the event’s 24-hour division that started at sunset the prior day. I was a mere 12-hour competitor, and the idea of doubling the number of laps to the peak felt nearly impossible.

Hard-packed snow covered the entire trail and became increasingly slick and soft with each passing daylight hour. Getting down from the summit sometimes involved breaking stride to balance and slide as if on imaginary skis. The traction devices on my shoes helped only marginally to prevent slipping and falling.

This route, whose pitch near the top resembles an expert ski run, starts in Millcreek Canyon east of the city at an elevation around 5,670’ and ascends for three miles and some 2,600 feet to the peak at 8,299’. Cheering volunteers, who had hiked up and hauled supplies for a wind-swept summit aid station, greeted us at the top, along with stellar views to the east of snow-streaked mountains surrounding the Park City ski areas. 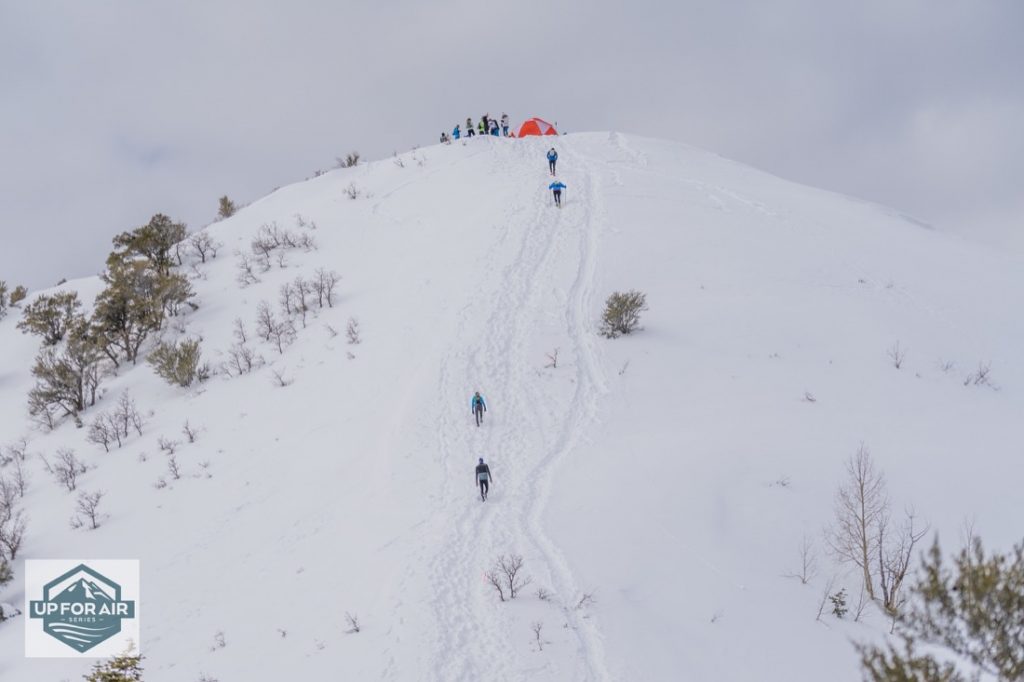 But, looking west, the view was not so pretty. A brownish-gray layer of pollution rested in the sky and obscured Salt Lake City. Seen from the summit, the sprawling cityscape below looked like pebbles at the bottom of a giant murky fish bowl topped by a layer of stagnant scum.

This ultra began precisely because of that ugly, unhealthy air pollution. Every winter, the region west of the Wasatch Range becomes more polluted than Los Angeles with lung-damaging particulate matter. Cold air gets trapped under a layer of warm air, creating an inversion layer that also traps pollution from myriad sources: cars from more than a million people in the greater metro area, refineries in an industrial corridor between Salt Lake City and Ogden, and households and businesses that crank up their heaters and burn wood. All together, it’s a recipe for a brown sky.

Ultrarunner Jared Campbell started the Running Up for Air timed event at Grandeur Peak to raise awareness and money to fight air pollution in his hometown region. He saw and felt the effects of the winter inversion layer firsthand on daily training runs up Grandeur Peak.

Campbell—best known as the only three-time finisher/winner of the Barkley Marathons (a race that only 15 individuals have ever finished), and also a ten-time Hardrock finisher who won it in 2010—grew up near the base of Grandeur Peak. During the past decade, he used the mountain as his go-to route in winter for Barkley training. Sometimes he’d wear a mask with a filter because the air quality was so unhealthy.

“I thought, how can I turn a big training day into something constructive?” So, Campbell recalled, he invited about a dozen friends to join him running up and down Grandeur in 2012, and he asked that they donate money to the nonprofit Breathe Utah.

That first year, Campbell completed 10 laps in winter storm conditions that required postholing through wind-blown snow the entire time. He and his buddies raised about $5000 for the nonprofit’s educational programs and advocacy.  They had so much fun, they kept the tradition going for three more years.

Then, in 2016—recognizing that others wanted to run it and also raise money for the cause—Campbell turned Running Up for Air on Grandeur Peak into a permitted event and moved the route from the mountain’s steeper west side (where they had been going up a 2.1 mile route with 3,300 feet of gain) to the present day location, which is more accessible. That year attracted 51 participants. This year, more than 200 registered; 40 finished the 24-hour division, 40 finished the 12-hour, and 107 finished the 6-hour.

The 2020 edition featured nearly ideal conditions with sunny weather and hard-packed snow. Ultrarunner Luke Nelson, a friend of Campbell’s who has participated in all but one Grandeur Peak event since its start, said runners coped with deep snow and strong wind in past years. But even in good weather, “RUFA is still plenty hard because of the amount of vert you’re doing,” said Nelson. “Even when the conditions are mostly ideal, it still beats you up.”

Nelson called Campbell’s event “amazing” for its community aspect combined with its environmental cause. He also likes how the 24-hour starts the night before the 12- and 6-hour runners join. “You get the night out of the way, and then you’re running with a bunch of people who are excited and helping you feel encouraged, and it’s daylight so you don’t feel the haunts of the dark.” 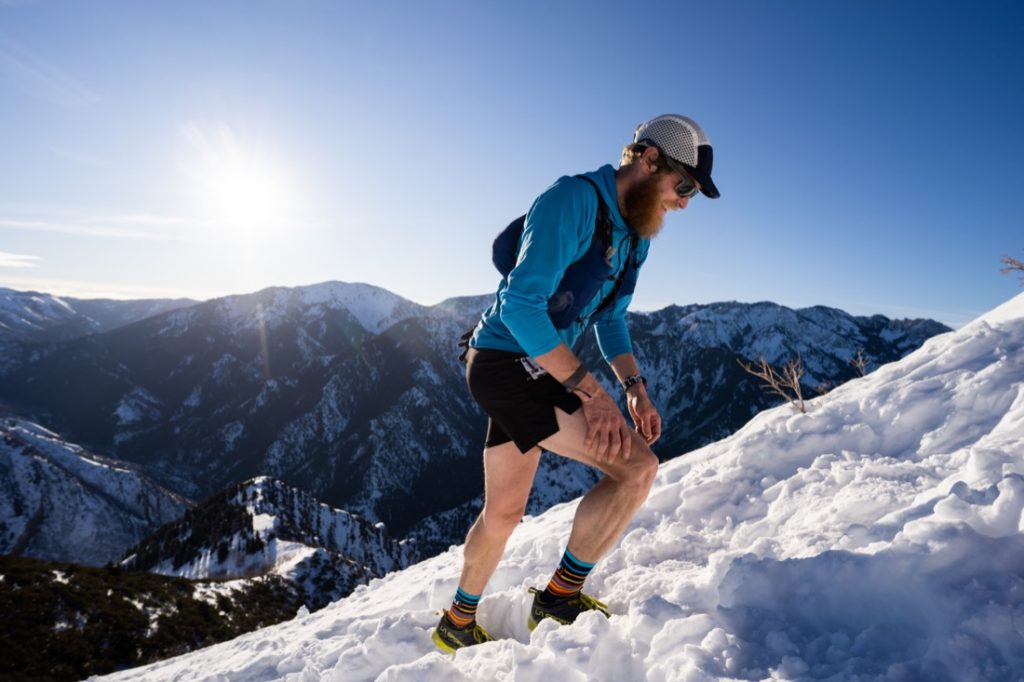 Down at the base of Grandeur Peak, Roch Horton captained the eco-conscious aid station. Horton—the legendary 10-time Hardrock veteran who runs the Kroger’s Canteen aid station high above treeline at Hardrock’s Virginius Pass—delivered Campbell a burrito during the first Grandeur Peak 24-hour run eight years ago and has been a fixture at the Running Up for Air event ever since.

Aid station volunteers washed dishes, rather than using disposable items, and sorted trash to minimize the waste stream. At the end of the event, they collected only a single bag of true trash, along with half a bag of crushed cans and bottles, and half a bag of compostables.

Campbell said he’s striving to lessen the event’s environmental impact. Next year and beyond, he hopes to employ electric vehicles to shuttle runners to the start, and to use carbon offsetting to balance the impact of runners driving and flying to the event.

“I’m not blind to the huge impact of creating such an event,” said Campbell, who is an ardent environmentalist interested in net-zero living, having designed his home to produce more energy than it consumes through solar power. He also is the father of two young girls and works as a mechanical engineer. “I’m intrigued by the challenge of creating an event with as little impact as possible to put it on.”

To that end, he supports Grandeur Peak-style events forming in other locations, so runners can travel shorter distances to participate. “I’d love it to be an almost exclusively local thing” with more events on peaks in other regions, Campbell said, rather than draw participants from far and wide.

Over the past two years, the Grandeur Peak event has mushroomed from its humble beginning as Campbell’s training run into a series of co-branded, coordinated, independently organized events of a similar format, all raising money for environmental nonprofits working on air quality, conservation and climate resiliency.

In addition to Salt Lake City, the other RUFA ultras take place in Ogden and Provo, Utah; Missoula, Montana; and near Denver, Colorado. A team in Europe also is organizing one in Chamonix, France.

“It’s grown like crazy,” Campbell said, “and it’s fun to see these two different parts of my life”—ultrarunning and climbing—“coming together.” The total number of participants in this year’s running and climbing Up for Air series (not counting the one in Chamonix) is expected to exceed 1200, with fundraising reaching its goal of raising $100,000.

Campbell said the series grew more organically than intentionally, with other runners approaching him to start events with the same format on other peaks. Ultrarunner Tara Warren, race director of the Malans Peak Running Up for Air event in Ogden, is a prime example. She got the idea after racing the Running Up for Air Grandeur Peak event, and she wanted to support the cause because she feels the effects of air pollution while training north of Salt Lake City.

“The only way I could get out of the gunky air was to get up higher above it,” Warren said, recalling past winters’ inversion layers. “If I ran in the air pollution, I could immediately feel my lungs burning and my efforts decrease. The fight and yearning for clean air as an athlete and, more importantly, as a mother was real. Trudging up and down Grandeur in 2017 was such a grind, but in the back of my mind I knew I was making a small dent in the fight for clean air as a mountain athlete.”

While running the Grandeur Peak Running Up for Air in 2018, Warren and a friend realized that their local mountain in Ogden, Malans Peak, had a similar elevation and would work well to host the same kind of event. “Grandeur was already getting sold out with waitlists, and this would allow more people to run and participate without having to drive,” she said.

RUFA-Malans Peak started in 2019 and also raised money for the nonprofits Breathe Utah and Utah Clean Energy. This year, the Ogden event had close to 90 participants in the 6, 12 and 24-hour divisions combined, and over 40 volunteers, raising over $25,000.

My RUFA experience ended in just under 10 hours, when I concluded I didn’t have the energy or time for one more lap. The five I completed, totaling a little over 30 miles and nearly 13,000 feet of elevation gain, fully depleted my legs and jumpstarted my spring training.

Will I try the RUFA-Grandeur Peak again? Perhaps, because I found the event so satisfying. But the experienced also inspired me to find ultras closer to home, rather than drive long distances to race out of state.

Sarah Lavender Smith is an ultrarunning coach, writer and mom of two who divides her time between the Bay Area and southwestern Colorado. She is the author of the book, The Trail Runner’s Companion: A Step-by-Step Guide to Trail Running and Racing, from 5Ks to Ultras. Follow her blog TheRunnersTrip.com.