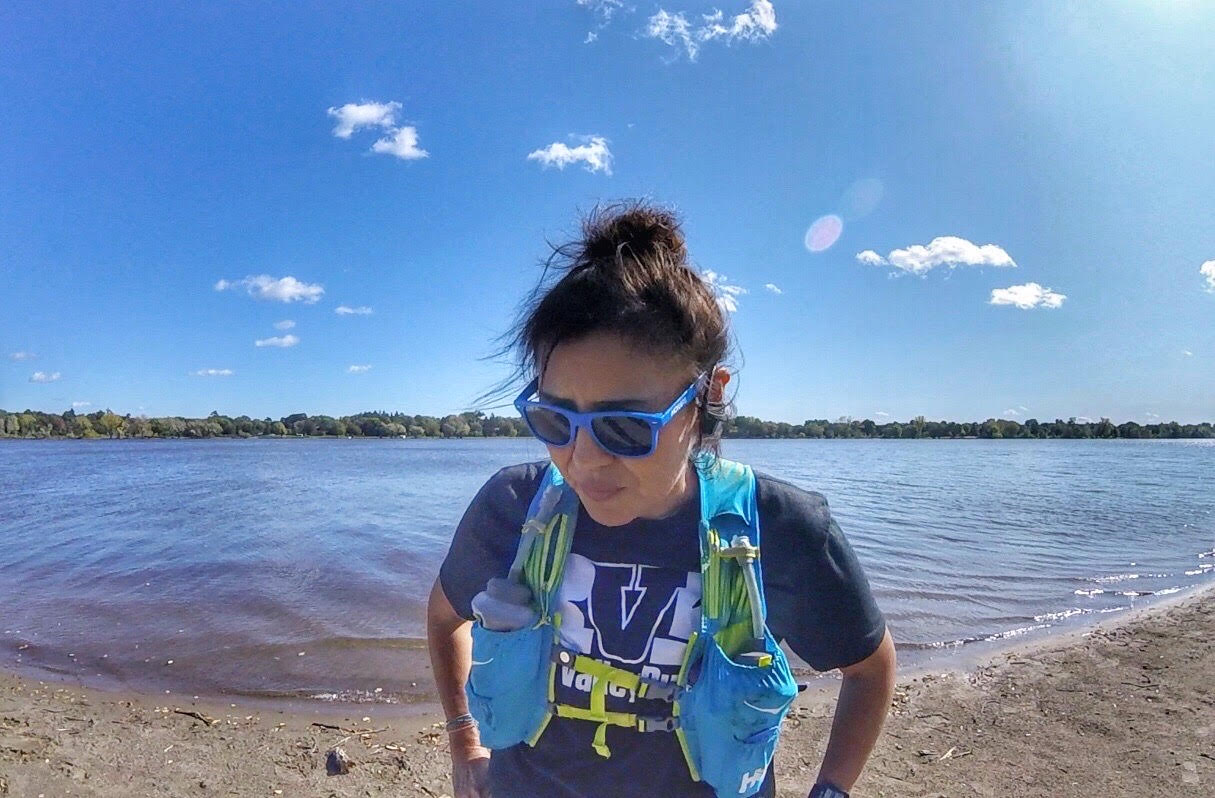 Running for Those Who Can’t: Verna Volker

Sponsored by HOKA ONE ONE®

HOKA ONE ONE® produces premium performance footwear and apparel for athletes of all types. With a bold and unexpected approach, and a focus on amplifying all voices and telling the stories of athletes from around the world, HOKA empowers everyone to feel like they can fly. Visit hokaoneone.com and follow @hokaoneone for more stories like Verna’s. It’s Time to Fly™. #timetofly

During the long summer days, the sun rises before 5 a.m. in Minneapolis, Minnesota, home to the hardworking mother of four, founder of Native Women Running and ultrarunner, Verna Volker. She heads out the door for her daily morning ritual: a run towards the rising sun.

Volker, a member of the southwest-based Navajo Nation Tribe, never considered herself a runner while growing up. She excelled in basketball but disliked the conditioning and running. In college, she’d run a mile a few times per week, but that was the extent of her experience with the sport. It wasn’t until she started a family that she began to explore the burgeoning running scene of her new home in the Twin Cities. 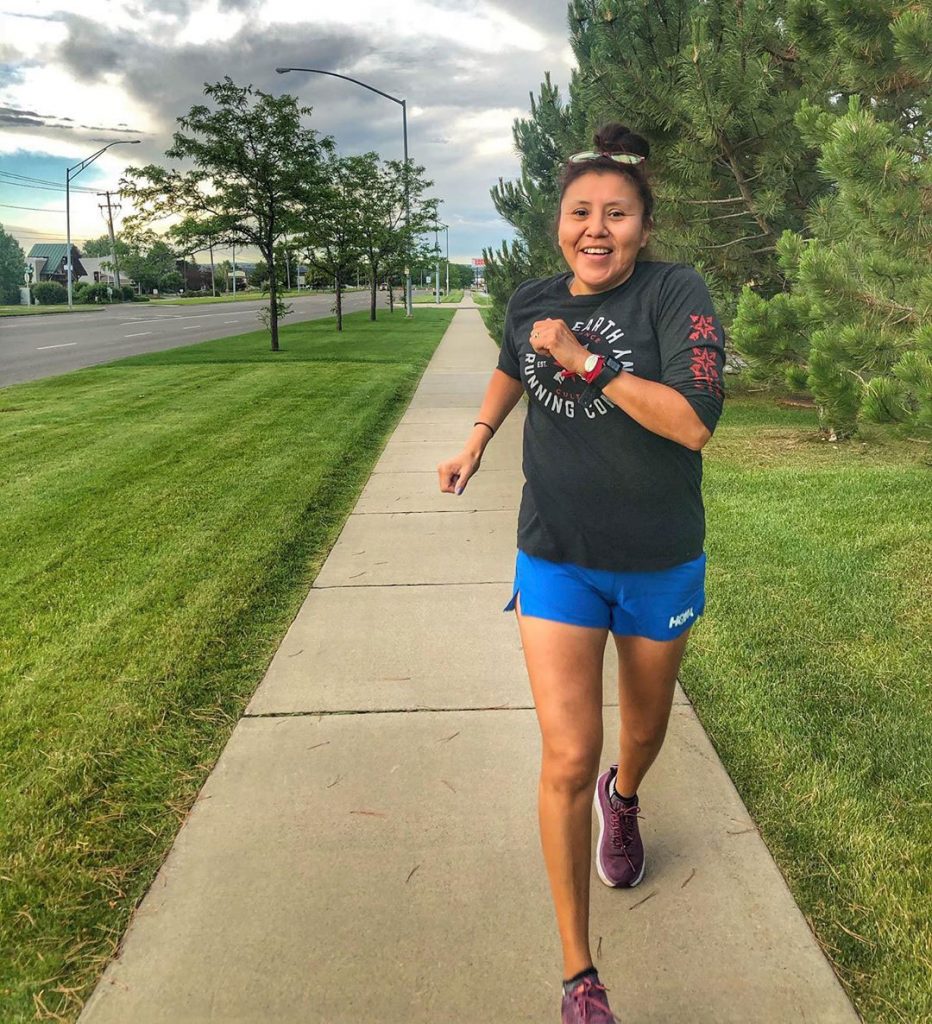 “My body can do things that I never thought it could do. Running is a lot more mental than I thought,” Volker said after finishing up her run—a routine that has become one of the most important parts of her day. “In our culture, when you wake up in the morning, you run to the east to greet the creator and say your prayers.” She is a busy mom who runs a fledgling business and has always been an early morning person. “I like to get my running in before the hecticness of life happens, always as the sun rises,” she says.

Volker invests much of her time working to chronicle Indigenous women runners from across the country via Native Women Running (NWR), an organization that she started two years ago out of frustration with the lack of visibility of Native women runners in the mainstream running world. She initially found inspiration to start NWR because she didn’t see herself as the woman on the cover of magazines, advertised in the media, on podcasts or in commercials.

“My main goal with Native Women Running is to share other’s stories and running journeys. I feel strongly about spreading positivity, inspiring Indigenous women runners and supporting people from all walks of life.”

NWR is growing fast, amassing thousands of followers the last few years through Volker’s dedication to giving any Native runner interested in doing so, an opportunity to share their life experiences. Partnering with the Iowa-based Red Earth Running Company, an independent running brand with a mission to elevate Indigenous running, she has helped put her passion into apparel that aids in spreading the same message of positivity and inclusion. 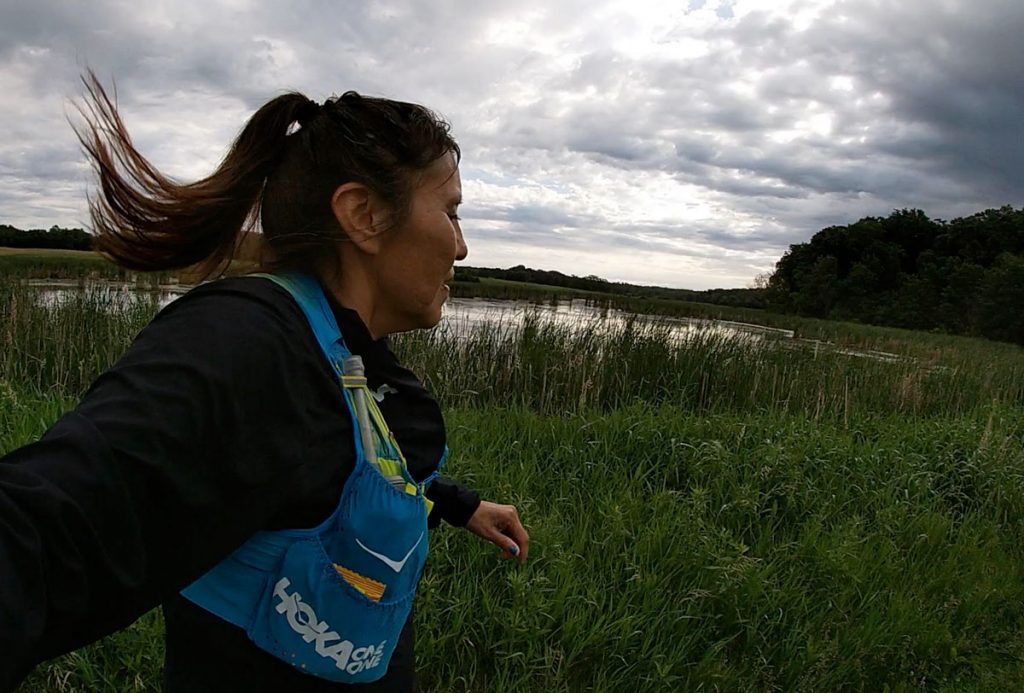 “All of this should be on a platform because the Native people are so underrepresented in the running world. We’re such a small percentage in the US, but we should still be visible too.” Her motivations for expanding exposure on issues in the Native communities go even deeper. “It’s amazing how much of where we run on is Native American land. We are Indigenous people, and this is our land. This is our space too.”

Growing up in New Mexico on the Navajo Nation Reservation, Volker knew running was a big part of the culture even though she didn’t get involved. She remembers the Reservation being very isolated but at the same time, the expanse of the land offered her an unlimited, outdoor playground. As a little girl, her backyard included sagebrush and deep canyons. She remembers growing up without distractions and spending countless hours outside, exploring all day. Now that she is a runner and able to look back on staying active and outside, her passion for ultrarunning makes sense. Volker holds those powerful memories from childhood close to her heart and continues to develop a deeper relationship with Mother Earth.

“Now when I go home, I know I’m running on my family’s land and that I belong in this world.” She admits that despite the running opportunities, there are some deep-seeded issues in the Indigenous cultures that aren’t completely transparent to the outside world. Foremost for her, is the murder rate of Native women that is ten times higher than other ethnicities in America. According to the Centers for Disease Control, it’s the third leading cause of death for Indigenous women. Since the vast majority of these murders are committed by non-Native people on Native-owned land, and due to the insufficient communication between the various law enforcement jurisdictions, the investigation process is long and drawn out. Too often, it never even begins. 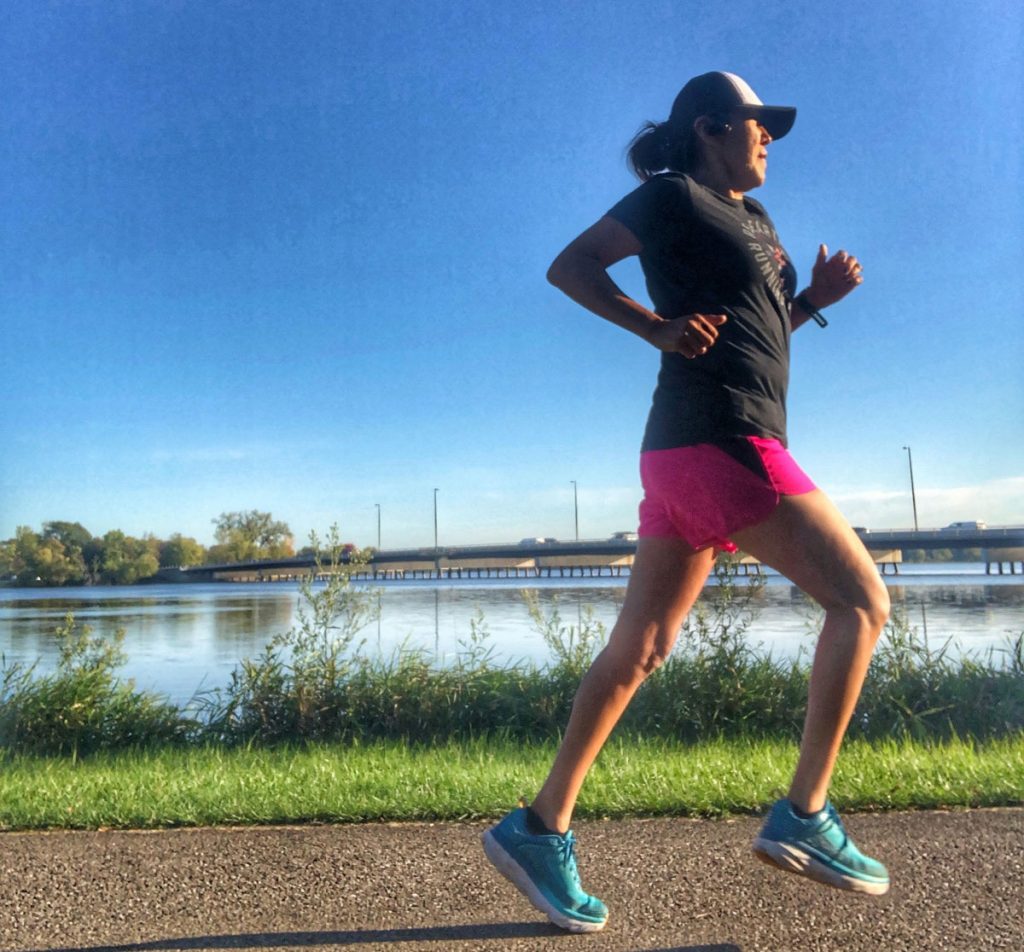 Each morning Verna runs toward the east to greet the rising sun and pay homage to her Navajo ancestors.

The National Crime Information Center reported 5,712 known incidents of missing and murdered Native American women in 2016 and much to her dismay, Volker knows that number continues to rise each year.

Through her fundraising involvement with Missing and Murdered Indigenous Women (MMIW), partnership with Red Earth and NWR platform, she’s helping to bring these issues to light and put necessary change in motion.

Volker organizes a virtual run each year on May 5 to raise funds for MMIW. In her eyes, the running culture of the Indigenous people aligns perfectly for shedding light on this horrifying trend. “It makes sense now. This is why we run. We run for healing,” she says. “We have such a traumatic history of our ancestors and even today, in our own families. As Native women, we are very sacred and look at each other as sisters. I like to stand up for things; I like to protest. A lot of time we’re not running for races, we are running for someone who dies that no one knows about.”

“One of the reasons we run is for MMIW, and the crises on reservations,” she continues. “We are thinking about these women and how we can spread this awareness. And it makes more sense to me now that I’m a runner.”

Many Native women will adorn a red handprint on their face covering their mouths to symbolically represent the oppression they face on the reservations. “We’ve had enough of being silenced. We’re done with what’s been going on.”

Volker herself has lost too many family members during her life. She lost her father at a young age and recently lost a brother last November. Thoughts of relatives and friends that have passed on often bring her to tears and running becomes a natural, emotional release—a way to connect deeper with her feelings. “Running and crying and letting it go, knowing that tomorrow is a new day,” she reflects.

It’s powerful for her to have runners from all corners of the globe join in to support Native women and help spread awareness to the harsh realities of life on the reservations. She’s moved by the continued support she’s received but knows that more work is needed. “These stories are still not being heard. No one has any idea that it’s going on.” Her commitment is to continue to run and speak for those who can’t, for as long as she can, with the hope that she can inspire future generations to take a firm stand to protect their rights. 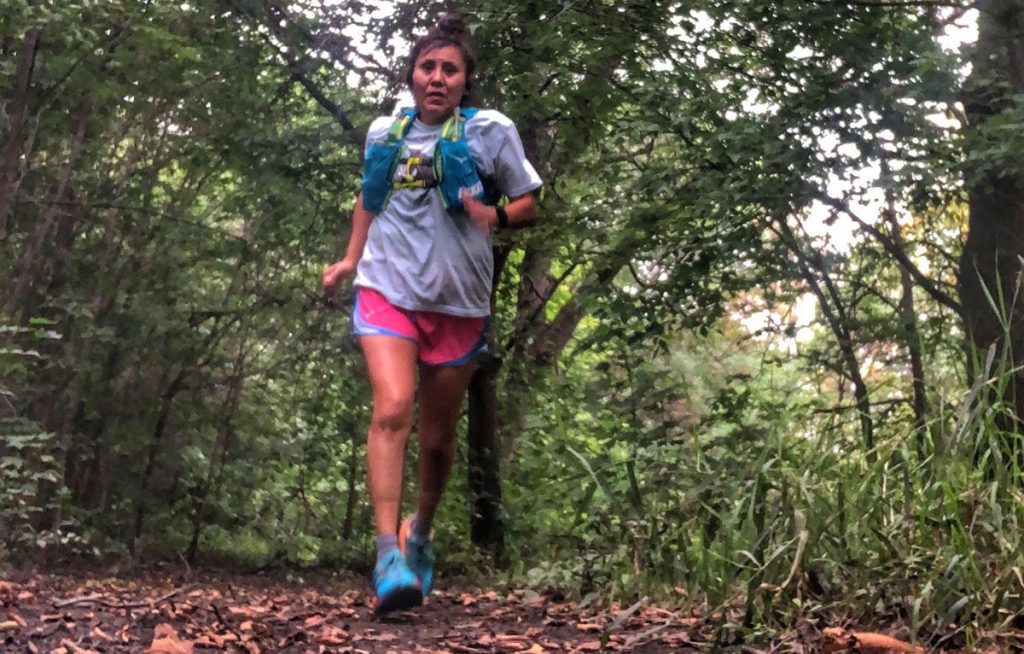 Verna is training hard for Surf the Murph 50 miler, slated for October.

She also realizes she needs to take it day by day, so she keeps her head up and stays focused on her own training as well. With guidance from her coach, Daniel Böcker from Bochum, Germany, who reached out to her on social media and offered his services for free, she looks forward to continuing to grow as an ultrarunner and wants to tackle Surf the Murph again in October, if it’s safe to do so. She feels a 50-miler is a good distance to tackle for her busy schedule and appreciates how supportive the community is of her personal pursuits.

“With confidence you can conquer anything,” she says. “And a coach can build that confidence through words of wisdom and support.”

Each morning, Volker wakes up and runs toward the rising sun, with a strong belief in the meditative and healing powers of running. Not only for herself and her family, but for all Indigenous people. “I run for the world. I see that the sunrise is clearer. I’m not rushing through life anymore because I make time to enjoy it. There is a sense of peace that I feel each morning. I know I need to keep going and that everything is going to be okay.”

Thank you for the article. It’s unfortunate the Native American people are not given the opportunities we take for granted.
Strength and prosperity to Verna Volker. I wish you well.