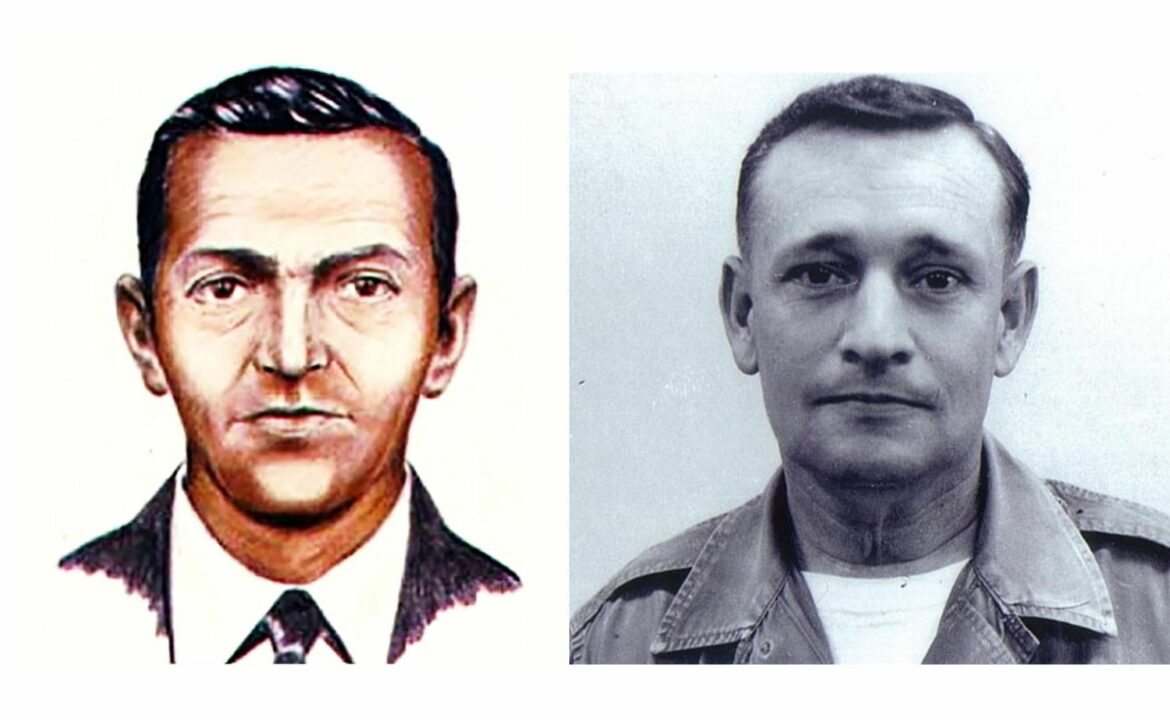 A composite sketch of D.B. Cooper alongside a photo of William Gossett, who claimed to be the infamous D.B. Cooper. Photo courtesy of the Gossett family.

This article was originally published in the December 2022/January 2023 issue of UltraRunning Magazine. Subscribe today for similar features on ultra training, racing and more.

He fought in Vietnam and Korea. He was a Mormon-turned-Catholic priest who went by Bill or Wolfgang or Wolf. He was an ROTC instructor, an exorcist and paranormal researcher. He was a radio host. He was a runner. And, many believe, he was D.B. Cooper.

For Gregg Gossett, he was dad, and two distinct memories have stayed with him. One was following behind his father’s flowing robes as mass ended. A part of the old Catholic church, incense hung heavy in the air of the priest’s chambers as his father pulled his frock over his head. Underneath he had on a pair of running shorts and sneakers.

Then, there’s the time when his father took him downstairs to show Gregg something for his 21st birthday. He opened a locked file cabinet, pulled out a composite sketch of D.B. Cooper and held it next to his face. “Who’s that look like?” he asked.

It meant something to be 21 back then. You were an adult and ready for the world. But Gregg wasn’t ready for what happened next. “He said I could never tell anybody while he was alive.” His father then produced a set of keys to a safe deposit box in Vancouver, where he said the rest of the money was. It all made sense suddenly, in a hazy sort of way, the years his father was away—the never-ending scramble for money—and the crazy billboards dedicated to his mother.

The notorious crime occurred Thanksgiving eve in 1971, when a man gave the name Dan Cooper at the counter at Portland International Airport. Dressed in a dark suit and wrap-around sunglasses, he boarded flight 305, a 727 bound for Seattle. He sat in the back, ordered a bourbon and soda, and slipped the stewardess a note. When she dropped it in her purse, he leaned into the aisle. “Oh miss,” he said calmly, “You’d better look at that note. I have a bomb.”

The skyjacker ransomed $200,000 in cash from the FBI and four parachutes. He released the crew in Seattle and with remarkable specificity, ordered the plane to fly at 200 knots and stay under 10,000 feet –the flaps at 15 degrees and the landing gear down. Boeing said the plane couldn’t handle those settings. He said it could. They said the aft door couldn’t be lowered midflight. He said it could. He opened it and jumped out into a stormy night and into infamy. Known as D.B. Cooper, his audacious crime and escape remain the only unsolved skyjacking in American history.

The FBI has long maintained that Cooper never even survived the jump, much less made it out of the wilderness. Described as impenetrable, inhospitable and some of the most rugged terrain in the contiguous United States, the purported landing zone in lower Washington state and northern Oregon was scoured by one of the largest manhunts in history. Escape was impossible. Then again, in the early ‘70s, the idea of someone running across mountains, on and off trail for hundreds of miles, was absurd.

William Pratt Gossett was never on the FBI’s radar. That is, until 2003 when he died and Gregg spoke out. The Bureau’s interest was piqued and went full-speed on Gossett. Through hypnotism, Gregg remembered moments from his childhood—detours of a distant father heading into the Wasatch Mountains in search of something he’d lost. He and his mother would drop him off at North Ogden Pass, where he double-timed it, first along a trail, then scrambled into the brush and vanished. “He was a Special Forces type of guy,” said Ogden police Chief Jon Greiner, “who thrived in a tactically challenged environment. That’s where he would have felt best.”

After several days and hundreds of miles of running through various areas of the Wasatch Mountains, Gregg and his mother would pick him up at a designated spot in Park City. The mountains were his training ground—his sanctuary. But could he hold his secret?

At the time the skyjacking occurred, Gregg was four and his mother, Theresa, was done with Bill Gossett. She had kicked him out earlier in the year. A womanizer, gambling addict and scarred veteran, he was unreliable and often scary. But at Christmas, Bill showed up and pulled stacks of bills wrapped in rubber bands out of his pockets. He bought her the house she’d been renting from the dentist next door, and paid in cash. But it wasn’t enough for Theresa. She would later tell Gregg, “I know something about your dad that would really, really get him in trouble.”

The following spring in Ogden, Utah, where Gregg and his mother lived, a bizarre set of billboards began to spring up. On a white background adorned with flowers and hearts, the writing was a bold red: “Theresa, I love you. I want you back. – William P. Gossett.”

After that, Gregg didn’t see his father much. Gossett changed his name to Wolfgang, remarried and began an obsession with marathons and the paranormal. It wasn’t until Gregg took up triathlons in college that they reconnected and bonded over running. “He loved running,” says Gregg. “Every time he called me, he either asked for cash or wanted to talk about his latest run.” Wolf, as he was known then, was always just getting back from a run. There were 20 and 30-mile lunch runs and weekend marathons. Always on his singlet was his master jump wings—an elite badge earned from the Army’s Jumpmaster School in combination with 25 combat equipment jumps.

Maurice Richards worked for the Weber County public defender’s office and told the Standard-Examiner about a day in 1977 he’ll never forget. “There’s something I’ve got to tell you,” Gossett told him and proceeded to confess. Richards advised him to not tell anyone.

“Not only does William Gossett look almost exactly like the FBI composite sketch of Cooper,” said Galen Cook, a lawyer who has spent 20 years researching the D.B. Cooper case, “he also had extensive military training enabling him to safely jump from a jet in poor weather.”

Special agent Larry Carr, head of the Cooper team from 2007– 2010, was not convinced. “There is not one link to the D.B. Cooper case,” he said of Gossett. Then again, that is true of every Cooper candidate the department has ever investigated. Their suspect list numbered in the thousands by July 12, 2016, when they finally closed the case. It was over. The hijacker turned folk hero had gotten away with it.

Author Geoffrey Gray believes the answers lie in Canada and with a French comic book that has recently come to light. Published in the 1960s, it was titled Dan Cooper and followed a daredevil who flew jets and jumped from planes wearing a suit and tie.

Gossett is one of the few candidates that checks those boxes. He had been stationed at an embassy in France and often spoke the language with Gregg’s Swedish mother. He also told two of his sons he stashed the money in Canada. “He took my brother up there for a supposed vacation,” said Gregg. “He left him in a hotel, came back a few hours later and immediately said, ‘We’re going home.’” Among Cooper sleuths, Gossett consistently remains one of the top candidates.

The D.B. Cooper case has been extensively scrutinized. However, there is one item that is consistently overlooked. While the briefcase and the apparent bomb inside it received the lion’s share of attention, it was a small, green bag which Cooper brought with him that holds a definitive clue. Described as both a canvas bag and a paper bag, the contents have never been known. As one theory is as good as the next, it could easily have held something they never would have thought about: a pair of running shoes.

Jared Beasley is a New York-based author and journalist. His 2019 book In Search of Al Howie was chosen by Kirkus Reviews as one of the best indie books of the year.