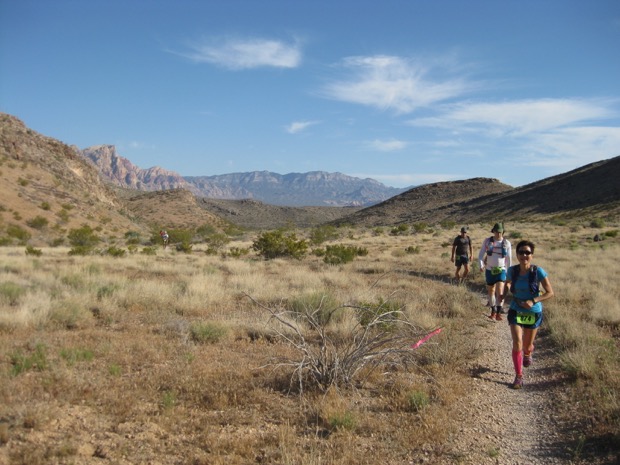 Manny Pacquiao may not have been able to deliver a knock blow to Floyd Mayweather in “the fight of the century” going on at the MGM Grand in nearby Las Vegas, but in the Red Rock Canyon area just to the west, the sun was having no problems landing solid knockout punches on all but six of the twenty starters at the Ride the Wind 100 Mile.

Ride the Wind is a desert race through and through with cactus, kangaroo mice, wadis, coyotes, painted rocks, lizards, one hundred percent exposure, and a UV index that could strip paint off the space shuttle. Even the cactus was dying out there. But the desert scenery was spectacular. The striated surrounding hills and the full moon at night were awesome to behold. If you like the desert or if you want to experience the desert, this is your race.

The course is a 25 mile figure eight loop with a total elevation gain of 8800 feet and frequent returns to the Start/Finish area, which was wonderful because Elemental Running, the race company running the show, had a grocery store style ice container set up there, coffee at night, and a great menu. I may be a herbivore at the start of the race but after 24 hours I’m pure carnivore and the thick chunks of greasy bacon I was served Sunday morning did more than twenty years of training to get me to the end.

The four tours of the course are run continuously in the same direction and were punctuated by a quick but weird visit to Blue Diamond, a tiny town full of people, apparently, who love stone walls and fancy landscaping. Running the quarter mile of tree-lined, neighborhood asphalt road and passing a tiny town library and firehouse were slightly surreal after hours in the desert.

There were lots of mountain bikers, most of them quite courteous and good about stopping for the runners, but there was talk that some looked upon the flags marking the course as litter and were known to remove them. Said mountain bikers should visit the trail at night with a flashlight and get acquainted with the ubiquitous broken bits of bike reflectors shining back at them…actual litter. But in the event, the course markings were spot on though some of the trail names were disconcerting: “Deadhorse Loop,” “Landmine,” and “Hurl” being three examples.

Fifty, twenty-five, and sixteen mile events were run simultaneously with the 100 miler. The shorter distances brought the total number of entrants up to about 75 runners, and the fresher, less well-fricasseed runners were a welcome distraction for the 100 milers. Holding the race on the same weekend as the Miwok 100K and a couple of other well attended 100 mile races in the West might have hurt attendance at Ride the Wind, but Race Director Jimmy Gabany assured us that the race will continue next year, albeit under new management, and he expects continued excellence and growth for the event.

Finishing this race was tough. The second day was even hotter than the first. But what a challenge! If you go, use sunblock liberally and keep reapplying it. Take chapstick. The hot desert wind dries you out fast. Drink a lot. Rest in the shade at the aid stations and go slow. And enjoy the desert.