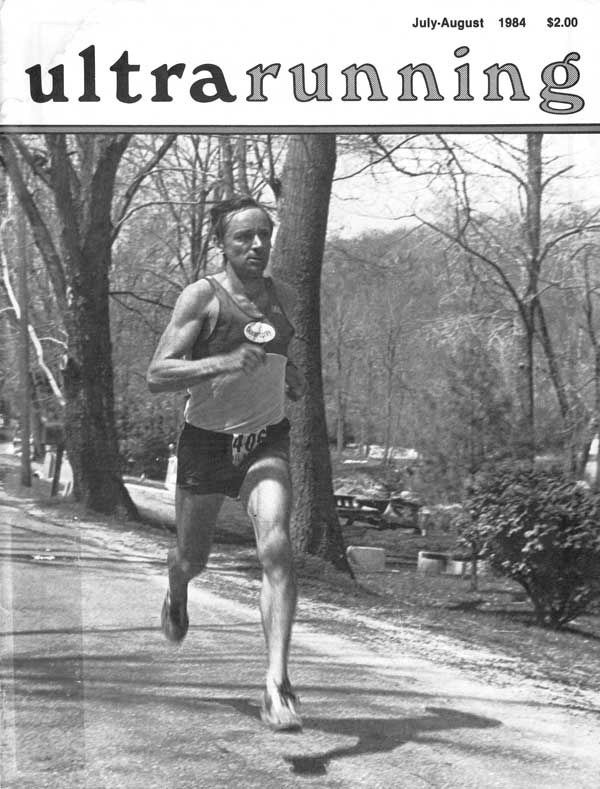 Paralyzed from the neck down, his head supported by a stainless steel band with pins penetrating his skull, Richard Dinges sat immobilized in a wheelchair last year still planning to run in the 1984 Catalina Marathon and Western States 100. “The doctors were pretty noncommittal,” Dinges said. “They just didn’t know what the outcome would be.”

On March 27, 1983 Dinges had gone out for a bicycle ride to warm down from a 35 mile training run when a car started to make a left turn in front of him. “I had a choice of hitting the car head on or going from the rear of the car to its front. I chose the front. As I started to clear the front of the car, the car went a little forward, forcing me into the curb.” All of the nerves in his back were pinched, leaving him barely able to move for four months, but he was determined to run again. “I gave them a real tough time in the hospital. At first I didn’t know the seriousness of the accident. I just knew that I wanted to get out of there.”

Steamroller Dinges provided the inspiration for the tough Steamroller 100 Km.

Dinges has been an ultrarunner since 1979 when he finished his first Western States in 23:46. His best at that race is 20:37. He also has a couple of second place finishes at the Pacific Crest Trail ultras under his belt, and a third place at the ’82 Mulholland 54 mile run. But Dinges’s favorite race will always be the Catalina Marathon where he is one of the original 39 runners. He had run it every year, and the streak looked to be over after the accident. “The doctors just kept telling me. ‘You’re going to be here for a while,‘ but my wanting to run the Catalina Marathon was the one driving force to my getting out of there. I was going to run that race one way or another, even if I had to walk the whole thing.”

Even after two long months in the hospital and another two months of being barely able to move, Dinges never got depressed about his condition. He never let it come between him and his goal of running again. “I didn’t get depressed because I never looked at it any other way than I was going to run again.” It was this kind of determination that led Dinges on long walks until he would drop from exhaustion. “Gradually I was able to run a few feet and then I would just extend the running part, little by little increasing the distance.”

With some swimming for flexibility, Dinges slowly started to gain strength in his left side. By March 25, 1984 he was on the starting line of the Catalina Marathon, still partially paralyzed on his right side. “I started out by running as much as I could. I tried to walk up the steep hills, then run some of the downhills and flats.” But halfway through Dinges started to tire and was forced to walk the rest of the way. He was not going to give up…he was going to finish. ”It was an effort from the physical standpoint, because I was getting very tired. I don’t have full range of all my muscles, which still causes me to limp, but I was motivated by the support everyone had given me. So I just kept chuggin’ along and finally the finish came.”

At that race, Dinges was a hero. After 7 hours and 4 minutes, he limped across that finish line to the sounds of 300 cheering fans and escorted by Bjorg Austrheim-Smith. “That had to be the highlight of my life, to come down to the finish and see and hear everybody. It is hard to express my feelings…it was just super.”

“Steamroller“ is the nickname given to Dinges by Tommy Jackson at the Pacific Crest Trail 50 back in 1981, because of Dinges’s unique race strategy. “Normally, I would run the second half of the race a lot faster than the first, so I ended up passing a lot of people. Tommy would say, ‘Here comes Steamroller Dinges, taking everybody down as he goes along.’

Hans Albrecht, race director of the Catalina Marathon and this year’s Steamroller 100 Km, named the latter after Dinges to honor him and his effort in overcoming his disability. The race was originally scheduled for November of 1983, so Dinges had no hope of running in it. But after it was rescheduled to April and after his victory at Catalina, Dinges, still only 70% recovered from the accident, was on the 100 km starting line, ready to run. It wasn’t so much the effects of the accident as it was the difficulty of the course that led Steamroller to yet another accident, one that ended his race after only 10 miles. “I just stumbled over some rocks and as I went down I tried to break my fall. But I hit my head on a rock, taking out my top front teeth.” He continued for nine more miles to the next aid station. “I was really mad at myself for having that happen. I figured it was going to make it kind of difficult to complete the race that day, so that was it for me.”

The day wasn’t quite over for Dinges. He went out that very afternoon to have his teeth capped by a ‘dentist so that he could make it back in time to watch the last of the runners finish, especially his friend Bob Closson. “I had been running along with Bob when I fell. He had made sure I made it out to the checkpoint, so I really wanted to see him finish.” Dinges viewed the 100 km as a milestone rather than a disappointment, because it was only by running it that he continued to gain more strength in his body and acceptance for his limitations. “It was a disappointment, but it made me think back to the bicycle accident. It’s just one of those things that suddenly happens, so I need to make the best of it. I just wasn’t meant to finish that race that day.”

Almost every ultrarunner can identify with Dinges’s driving force to continue running till it hurts, so it isn’t so surprising that three weeks after the 100 km he was running the Aptos Creek Marathon, on a course similar to Catalina’s. He finished in 6:03 feeling even more confident in his recovery.

Dinges again made progress in June when he set out to run the Nugget 50. Even though he had to drop out at 18 miles because of hip pain, he won a minor victory. “It is a matter of strengthening the muscles and continuing to get more movement back. I think the hip pain in the 50 showed that I have to give attention to some of the specific muscle groups now, and strengthen them up.”

By the time you read this. Steamroller Dinges will have started the Western States 100. Whether he finished or how far’ he went is not important. The important thing is that he’s now well on his way to recovery.

Where is he now? How is Richard doing on his recovery?