The advent of spring is the Promise Land 50K. This year it was even more so with all of the rain. The streams were full and the leaves in the lower elevations were an eye-popping green. In 19 years of the Promise Land 50K, there have never been any changes. As a result, runners know the course and hardly anyone gets lost.

It is a classic course, as the runners start at an elevation of 1,200 feet. They then go up to 4,000 feet, down to 1,100 feet, and back up to 3,800 feet and then down to 1,200 feet. The course has a wide variety of surfaces from grassy soft roads to downhill single track. At mile 26, runners hit the bottom of Apple Orchard Falls and begin a 3-mile climb where most can’t truly enjoy the spectacular view of the falls.

Many runners camp out at the Promise Land Youth Camp on Friday night, when we typically have a big bonfire. However, this year there was horrific wind which canceled the annual tradition. I always buy 100 pizzas for the runners on Friday night, and all the runners bring desserts to share but there were so many that I could not try them all. 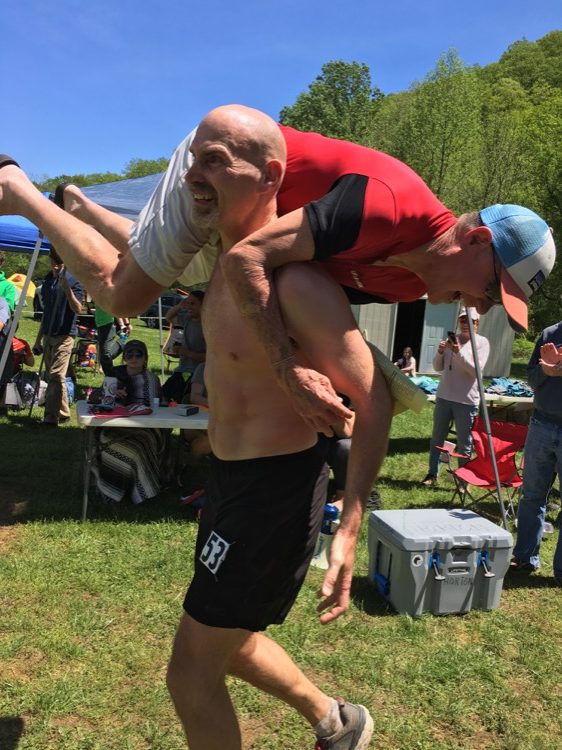 Promise Land is the second race in the Lynchburg Ultra Series and the Beast Series. Many runners were entered in the race to complete the second leg of the six-race series. With a 10-hour time limit, we typically surpass a 95 percent finishing rate.

Michael Owen missed the course record (set by Eric Grossman in 2012) by just over 5 minutes in 2017. Last year, he came to set the record but was sick and finished in second place. He came back to try and set the record this year, again. He went out on record pace through AS 1, 2, 3, 4 and 5. However, he started losing focus at this point (19 miles) and just cruised it on in for the victory in 4:46:20. That doesn’t seem too fast for a 50k but it is a Horton 50K, probably closer to 34 miles with 7,400 feet of elevation gain. Will Owen go after the course record again next year? Nich DiPirro (Charlottesville, VA) actually closed in on Owen, taking second place in 4:54:31.

Laura Sullivan (Blacksburg, VA) had run one ultra, Holiday Lake 50K, where she won and set the course record. I expected her to do it again and she did. Sullivan jumped out with an early 5-10-minute lead at the aid stations and held on for the victory, winning in a time of 5:55:03. Sheila Vibert (Arlington, VA) and Jo Thompson (Crozet, VA) were back and forth in their chase of Sullivan, never able to close the gap. Vibert took second place for the second year in a row in a time of 6:00:39. Thompson took third in a time of 6:06:39.

Most runners come to Promise Land because of the beautiful and tough course. Secondly, runners come because of the awards—Patagonia shorts to all sub-10-hour finishers, shirts to the top ten finishers and beautiful trophies designed by Bob Heltibridle. We also had a very special entry shirt designed by Helen MacDermott, one of the runners. I hope to see many of you on April 25, 2020, the 20th running of the Best 50K in the East.