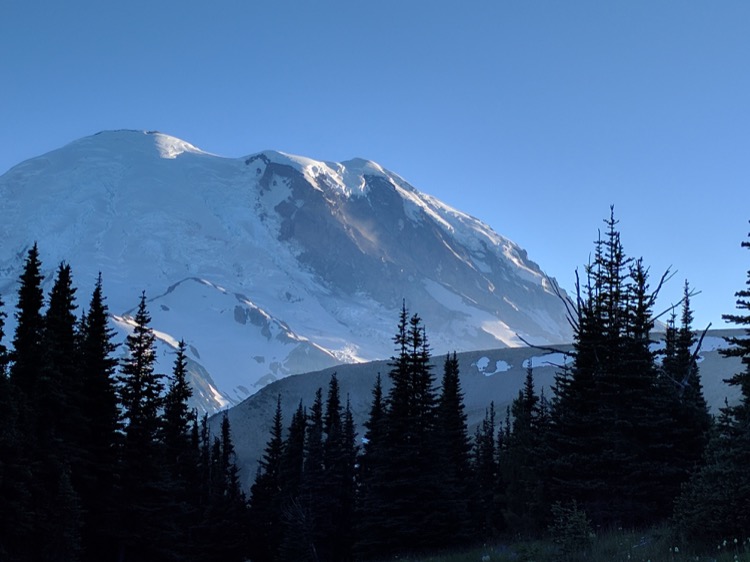 Mt. Rainier seen from the trail up to Sourdough Ridge.

Ode to Winners: A Mystic’s Homage to Fierce Competitors

All last week I dreamed of today’s run, 22 miles on trails north of Mt. Rainier. Hours of tranquility and beauty.

I began running in college almost 50 years ago, dragged out onto the track by my roommate. I’ve run off and on ever since. Running has always been good medicine. When I felt the weight of gloom, I knew that if I pushed myself out of the house and ran a few miles, I would feel better. It always worked. But the cure was always fleeting. An hour later the depression would be back. I would be swamped in gloom and soul-weariness.

Then, three years ago I was lured into signing up for the 40-mile Peterson Ridge Rumble in Sisters, Oregon. The pressure of the looming race drove my training through the heart of Seattle’s dark winter. I worked up to long runs of 20 miles. Then I planned a 30-mile run, figuring that if I could manage that, come race day I could do 40 miles, even if I had to crawl the last ten. Seventeen miles into this 30-mile effort on a cold, dark, drippy day, I crossed paths with my wife and daughter who were out riding horses. My daughter exclaimed, “Mom, look how happy Dad is! Look at his face.” It was true. I was happy, blissful, even in the gray and drizzle. The last couple of miles of that run were drudgery, of course. But after a shower and supper, I basked in lingering euphoria. A week later, even a month later, if I gave attention to the memory of that run, the bliss would return. Running long fundamentally changed my life.

Which brings me to the fierce competitors.

Only the looming challenge of a race could have induced me to run 20 miles in training. I needed a race to pull me across some magic threshold into the nirvana of distance. But no one would have put on a race for someone like me, a back-of-pack Social Security candidate. The excitement that fuels races and the hundreds of volunteers that make them happen comes from the fierce competitors at the head of the pack. The men and women who fly past me a couple of hours into my races (I always do the early start). The drama and beauty of the athletes fighting for first place or fifth place or aiming to set a new PR, driving themselves with heroic effort and mesmerizing grace—this is what draws the volunteers and spectators, the people who make races happen. Races are inspired by winners and would-be winners, by competitors. But I’m not a competitor. I’m a mystic. I bask in ecstasy during long, slow miles on mountain trails. But my miles and mystic trance are gifts from the competitors who inspire races.

And what a gift.

Mt. Rainier seen from the trail up to Sourdough Ridge.

Today, it was 6 p.m. when I started up Sourdough Ridge twelve miles into the run. (My start had been delayed hours from my original plan by domestic demands. Let’s just say that I share my house with five others including wife, kids, and grandkids.) I felt the bite of altitude and the steepness of the slope as I pushed up hill. On the ridge I ran south toward the junction with Huckleberry Creek Trail. The shadows were already thick; sunset was coming. From the junction, the trail climbed another hundred yards or so, then broke into sunshine before heading down.

My feet found their rhythm. I was light as a feather, dancing. Mountains ranged in the sunlight to the north and east, a panorama of scores of nameless hills and named peaks. The trail wound down through meadow, across scree and back into meadow, dropping into the dark valley of Huckleberry Creek. 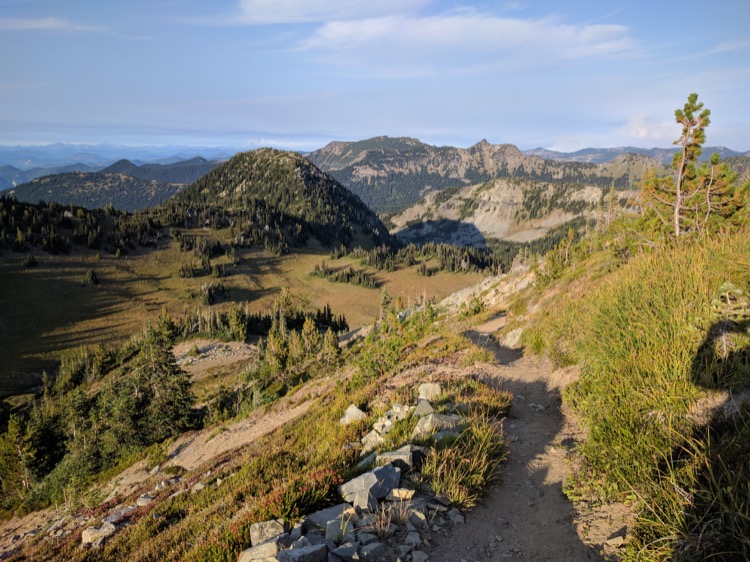 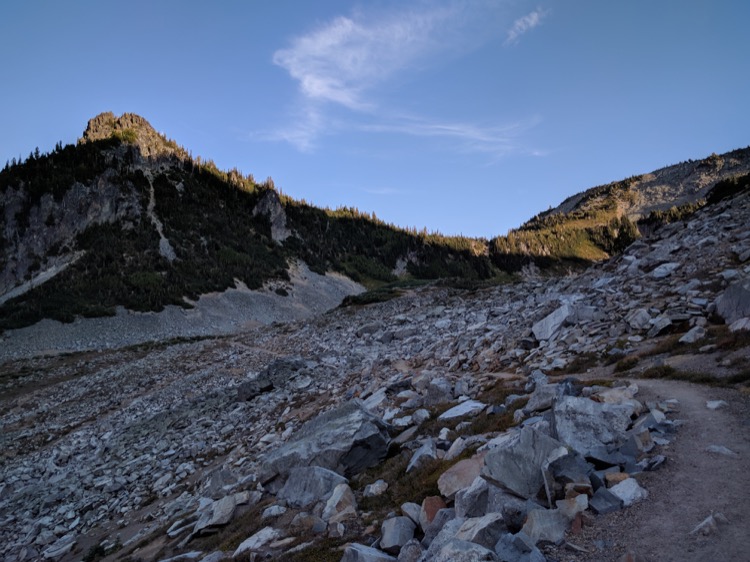 Nine miles to go. I needed to push. Still, in the evening light and balmy air, I could not escape enchantment. I stopped to take pictures. And every time I resumed running there came again the rush of bliss as my feet found their rhythm and danced with gravity and the trail. I savored miles of euphoria, a lilting sense of well being. It was effortless, romantic running, the kind that feels like it can go forever, burning no calories, taxing no muscles. While my feet were doing their thing, a soul-engrossing, intoxicating beat pulsed in the core of my torso. It happens only when I run far. It takes miles and hours for this mystic beat to develop and become strong enough to take over my senses. In this magical place, my soul gets mended.

This bliss, this mending—this is a gift from the winners, from the fierce competitors, from the people who inspire race directors and volunteers. I know the path to this bliss, but I would have never found it except for the race. I am not a competitor, not really. I don’t win races. I don’t even dream of winning. But every time I run long, when I enter the ecstasy that always awaits, I bless the fierce competitors whose struggle created the medicine that mends my soul. To those who fight to win, this is my homage