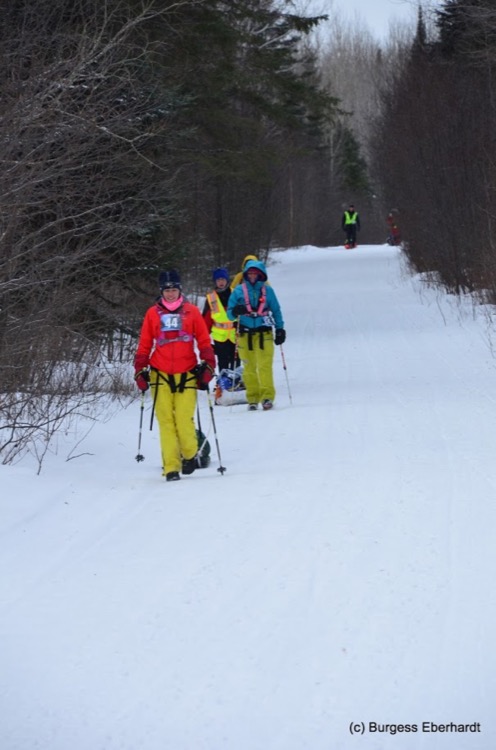 The Arrowhead 135 offers many choices to participants: bike, ski, or foot division; supported or unsupported. Each participant is required to carry a minimum list of survival gear. I was tempted to pack less gear for the predicted weather of 20 degrees, but I resisted. This was Arrowhead, 135 miles from International Falls to Tower, Minnesota in the heart of winter.

The anxiety evidenced at the gear check and prerace meeting were still going strong as we watched fireworks in the dark early morning sky that would send us down the trail. It was -15 degrees (the warmest it would be for the next three days). The groomed trail was hard and fast, my favorite condition. I hesitated to throw on extra clothes trusting that I would warm up in the sun even if the air temperature didn’t. Ten miles in I stopped to make a minor adjustment and discovered that I was surrounded by a small group of seven: six women and one man. Two of these women, Kari Ann Gibbons and Kate Coward, had already traveled this route from the finish to the start and were now doing the race start to finish. I was comforted by their presence. The group moved consistently down the trail and as pairings changed periodically, the conversation flowed freely.

As we closed on the first checkpoint at mile 35, the conversation shifted to what updates each needed to make. I hesitated, but opted to pull on an extra top layer, got some warm mac-n-cheese, refilled water, used the bathroom, and made some adjustments to the gear on my pulk. My entire to-do list took longer than I had hoped, but I felt it was a good investment. Believing that the others would be ready shortly, I headed out into the dark to hit the trail and wondered how far I would get before they caught up with me. The snow in this section was a bit sloppy and took a bit more effort. I tried to settle my mind for the 12 hours it would probably take me to get to the next checkpoint in the morning. The up and down trail, the full moon and the wind pushing snow out of the trees were my sole entertainment. The temperature slowly dropped. Despite very few interruptions, the time seemed to pass quickly.

Reaching the frozen lake, I knew I was within a couple miles of the second checkpoint, so my thinking switched to making a to-do list. While being comfortable, I still wanted to wear the last layer of clothing that I had been toting for a day. Extra clothes, refill from my drop bag, hot food if possible, real bathroom, a change of socks, and refill water – that should do it. The air temperature overnight had been -25 degrees with a strong wind and the day gave no hint of change. The parking area next to the cabin checkpoint was crowded with pulks, skis and fat bikes, a clear signal of a crowded cabin. Angling straight for the tiny kitchen, a volunteer approached me with a simple question: “Grilled cheese?” Perfect!

Floor space and an empty chair were difficult to come by.The cabin was filled with a collection of people right off the trail like me, and DNFs. I tried to respectively ignore the DNFs. I wanted to hear their individual stories, but didn’t want to tempt my mind to go there. Again, after too long a stay, I asked if anyone was leaving soon and started to ready for the cold outside. One young man who had been sleeping upstairs and was wandering about the cabin showed some interest. He quickly threw on his gear and we headed down the stairs of the cabin, hooked up our pulks and started on our way to checkpoint number three at mile 110. Having spent the last 35 miles alone, I felt very lucky.

Unlike the first flat section of trail and the second rolling hill section, this section would have some ski-like hills. We started a conversation that carried us through the rest of the morning, all afternoon and into the night. The trail was getting even mushier and it started to snow, but it didn’t enter our conversation. We talked about everything except the trail, the hills, the snow, the wind and the cold. The new snow and wind had wiped out any trace of the footprints left by those who had gone before us. And we kept moving. The periodic moon and cold gave us hints that we were in the wee hours of day two on the trail.

My companion declared that we should take a short break. I bristled at the thought and suggested we could consider it if we could get out of the wind. With a low-lying bog on our left and a brushline at the bottom of a hill on our right this might make a decent place. “How long?” I asked. “Four minutes – do you have a watch?” was the response. We each laid down on our sleds, staring up at the stars. I started my stopwatch. “What good would this be?” I wondered, but it was worth it for this companionship. I blinked once and saw my watch hit four minutes. We were moving and chatting again. Maybe it had made a difference.

The snow accumulation of one to three inches made sledding down some of the monster downhills disappointing and any of the lesser hills a waste of effort, but we welcomed the change and kept trying. We began to see others on the trail – first a few people bivying just off the trail, then people catching up with us – a brief conversation and then they were off. We walked into the checkpoint with very little advance warning. Fat bikes, pulks and occupied bivy sacks were scattered all along the trail. A few people were moving about and talking in hushed tones. My companion planned to change socks. I couldn’t think of anything to do there, so I swallowed a short shot of bourbon at the aid table and headed out for the last big hill. Mile 110 at 2:00 a.m.

As I started down after that big last climb, it occurred to me that it was no longer snowing and that the moon was brilliant, drowning the beam from my headlamp. This section would be a series of flat, long straight aways. I was happy to be here — tired and sore, but happy. Then the games began. I was singing down the trail when I began to make out images in the snow on the trees. Not scary things, just things I knew were not there. Then the light of the moon began to fade. Looking over my left shoulder I could see a slice removed from the full moon. Each time I looked, more was gone. The light faded with the diminishing sliver until it was almost all extinguished. Finally I turned to angrily face the moon that had abandoned me and realized that this was indeed the lunar eclipse! Now I considered myself very lucky and continued singing down the trail, quieting when I saw someone bivyed by the side.

With full sun taking over the assignment of lighting the way, I noted a figure chugging down the trail behind me. It was my overnight companion running toward me. We chatted briefly as he ran off ahead of me. Who knew a change of socks could make that much difference? A shelter popped up alongside the trail and the trail map indicated that it would be another ten miles to the finish. I tended to think in terms of quite a few hours and didn’t get too excited. Within a few miles of the finish a couple of others caught me; one moved on quickly and the other one stayed with me for a race debrief session. The finish line banner in sight was the first time I let myself believe I would finish this race again.

Kari Ann and Kate happily completed their 270 mile journey. And we would learn more about frostbite via others.